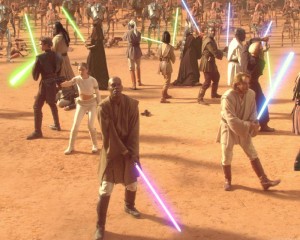 The lightsaber: the iconic weapon of the Jedi Knight. An elegant weapon for a more civilized age, able to deflect blaster bolts and cut through armor plating, and you know you’ve definitely made the “vshhhhh” noise while turning on a flashlight and swinging it around. Lightsabers are showy and surprisingly useful weapons, and reinforce the fantasy element of Star Wars. We see many versions of lightsaber combat, and a look at a duel from a mechanical perspective makes it all the more impressive.

Let’s start with the basics of lightsabers. They operate like many different types of bladed weapons, though European longsword and katana have been the greatest influence. Lightsabers can be one- or two-handed weapons, can be dual-bladed, can be dual-wielded either as two normal-size lightsabers or a normal one and a shoto, and have great room for individual variation in style. Lightsabers can be extendable, can be waterproof, and can be heirlooms as well as originally made. From a combat standpoint, lightsabers are among the most versatile weapons we ever see. Because they are unique to the user, and able to accomodate so many species of Jedi and Sith, there are infinite ways to fight with a lightsaber. We see styles that seem more like modern fencing, styles that emphasize precision and control. There are some who are more flashy in their fighting, embracing Force-enhanced acrobatics. Against droids and blasters, some Jedi manage to use their lightsabers as more defensive weapons. With seven separate forms, the Jedi of the Old Republic refined their lightsaber skills into an impressive and deadly art, until much of that knowledge was lost with Order 66. 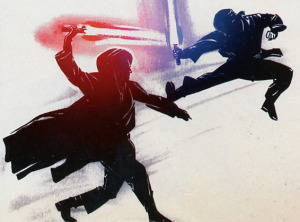 There is an excellent double-page spread in the Essential Guide to the Force detailing the different lightsaber forms. Shii-Cho focuses on the basic moves that are necessary for any of the other forms. Makashi is a dueling-based form that can easily use one-handed lightsabers. Soresu, originally designed to counter blasters, became a defensive-focused form difficult to use for pure attack. Ataru is the acrobatic combat form that makes for some of the best cinematic battles as well as allowing a Jedi to ignore the laws of physics. Shien/Djem So took the defensive principles of Soresu and turned it into a counterattacking form against blasters and other duelists, respectively. Niman, developed to encompass the highlights of all the forms, became popular among those Jedi who didn’t need to be accomplished duelists. Juyo was rarely practiced by the Jedi, as its power and fury could bring a Jedi dangerously close to the Dark Side; Vaapad developed as an extension of that thanks to Mace Windu and Sora Bulq. Many other, minor forms also developed, and Jedi and Sith deeply devoted to lightsaber combat often found other things that worked better for them. Now, let’s look at lightsabers and their wielders in action.

Rebels is bringing us some new lightsaber combat, so let’s rewatch Rise of the Old Masters with that in mind. The Inquisitor’s weapon is definitely unusual; we’ve seen a few double-bladed lightsabers, but we’ve never seen one before capable of this sort of windmill action. The lightsaber operates not just as a swordlike weapon, but also as a more long-range weapon. The unique design also makes a point about just how lightsabers are supposed to work: they are individual weapons, made specifically for that particular Jedi or Sith. The way the lightsaber works has been tailored to the individual’s needs, and as has been often seen in Star Wars, Sith often have more unique lightsabers than Jedi. We know what the Inquisitor is, but seeing his lightsaber really proves the point. The design is interesting enough, and we also quickly realize that the Inquisitor is a highly trained Sith acolyte who specializes in hunting Jedi, and is more lightsaber-competent than his opponents. 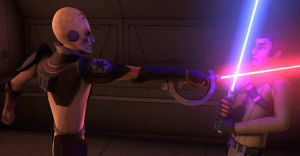 Kanan and the Inquisitor fight a duel that shows well their individual strengths. Recall that Kanan stopped Jedi training still quite young, long before he was able to master lightsaber combat, and probably has had little chance to keep his skills up. The Inquisitor has been seriously training for years, and has access to training materials that no one save Sith would. In their duel, this clearly shows. Kanan’s motions are choppy and wide, his swings more from his shoulders, and his lightsaber is moving all over the place. It would be far too easy for an opponent to get through Kanan’s (lack of) defenses, but only at considerable risk to themselves. A poorly trained combatant can do a lot of damage just by flailing wildly, which is what Kanan is doing. This is actually a very good reason for why the Inquisitor relies on his lightsaber’s windmill function; avoiding Kanan’s wild swings is probably the best idea.

We’ll probably see Kanan show off with his lightsaber a few more times in Rebels, and at some point Ezra will probably get some lessons. How will Kanan teach lightsaber technique when he’s still nearly a beginner? There are no guides to lightsaber combat left, unless they are in the hands of the Sith. Though Kanan may look impressive to the ordinary citizens of the galaxy and the non-Jedi crew of the Ghost, the Inquisitor clearly knows differently. Perhaps we’ll even get to see Kanan grow as a Jedi, and maybe even see him fight well.

Continuing the analysis of lightsaber duels, watch carefully what Obi-Wan and Darth Vader are doing aboard the Death Star. They are both highly skilled duellists, and they are not deliberately trying to antagonize each other. Instead, it looks more like they’re testing each other’s defenses carefully, checking for any possible weak spot- and upon finding none, Obi-Wan takes a completely different option rather than continue the fight. We know from Revenge of the Sith that they are a good match for each other, and they know their weak spots very well. Even though Obi-Wan and Vader haven’t seen or fought each other in years, they fall into a duel with the pattern of old friends fighting each other again. In this light, Obi-Wan choosing to die rather than fight against his old friend and student makes more sense. It’s impossible to tell which will win, and finding out could easily jeopardize the rest of the party’s chances for getting off the Death Star. Obi-Wan has no need to show off his lightsaber skills; they are irrelevant here. What matters more is how he chooses to use them.

Perhaps the old Jedi Order wasn’t as big on lightsaber training early on in one’s Jedi training, but Luke’s accelerated training made him catch up with lightsaber skills quickly. Luke is better with a lightsaber than we might expect, and makes fewer amateur mistakes than Kanan. Nonetheless, the choreography of the Cloud City duel shows off Luke’s weaknesses well. He, too, is swinging from his shoulders and flailing about, and clearly does not have the technical skill to truly fight Vader well. Nonetheless, Luke’s training has clearly been more comprehensive if briefer than Kanan’s. Seeing a Jedi halfway competent with a lightsaber after only a short while of training, combined with how haphazard Luke’s teachers have been due to the destruction of the Jedi Order, speaks volumes for Luke’s Force potential as well as how dire the situation is.

By the time of Return of the Jedi, Luke is surprisingly better at lightsaber than we might expect, especially after seeing how the Cloud City duel went. He is less reliant on the environment around him as cover, and less eager to engage Vader quickly. If you watch the two duels carefully, Luke’s control of the lightsaber has greatly improved, and even his wilder motions are more carefully planned. The increase in control and emphasis on technique fits well with Luke’s journey as a Jedi. As he calls himself a Jedi Knight and starts acting like one, he learns to use a lightsaber as more than a shiny toy or a relic of a bygone era. At last, Luke is showing his skills, and even though he is still a comparative novice, his confidence lines up well with his newfound status as a Jedi Knight.

Various dueling styles define each individual Jedi and Sith, and new Star Wars content promises to be as varied in lightsabers as it has been. Whether the Jedi have been reestablished by Episode VII or are still trying to rebuild, they’ll be carrying their signature weapons, and we’ll definitely get to see them in action. The Star Wars universe will consistently be defined by a weapon that seems to fit more in a high fantasy tale than a space opera, and in new work, we’ll expect the same level of well-choreographed fights and extensively developed fighting styles. In the meantime, I’ll be over here playing with my Inquisitor lightsaber and definitely not accidentally destroying furniture while spinning it around in midair.