The Star Wars universe really is full of plot holes big enough to drive a Star Destroyer through. Lots of authors, tangled chronology, and large areas of the timeline off-limits make some of the earlier books confusing. Now that we have a complete Legends timeline, and the Story Group is working hard to maintain continuity in newly published material, we probably don’t have to worry about large plot holes any longer. However, sometimes it isn’t bad if things don’t quite line up.

There is actually good in-universe reason for some of these plot holes. When we re-read the Thrawn trilogy now, we know the actual timeline of the Clone Wars and the real ways to refer to Jedi who left the Order and the exact events that led to the rise of the Empire. However, at the time of the Thrawn trilogy’s publication, we had almost nothing. For all we knew, the Clone Wars could have happened fifty years ago rather than twenty-five, and everything we heard was indeed true. Perhaps the older members of both the Empire and the New Republic aren’t correcting the chronology because they know that the younger ones have heard several jumbled versions of the timeline, and don’t generally trust anyone’s accounts of history. The Empire has fundamentally altered the galaxy, and the New Republic’s challenges include learning to tell history the way it really happened.

What if we take the Thrawn trilogy as being reasonably accurate in-universe? We know that the Empire has spread vast disinformation about the exact nature of its rise, and most ordinary citizens would have no idea what a Sith was, might believe that the Jedi had indeed turned on the Republic. Leia and Luke and others of their age group have known nothing but Imperial rule, and have no reason to doubt the Empire about anything they have said about history. Perhaps Leia didn’t start learning the real history of the Clone Wars until she was considered old enough to handle Rebellion secrets, and Luke never actually heard until he joined the Rebellion. Unraveling the real stories of galactic history before the Empire was probably a challenge for the first decade after the Battle of Endor, simply due to the massive damage the Empire did to everything that could possibly oppose it.

Throughout the entire Bantam era of EU, we still have no idea what happened before A New Hope. That whole era is off-limits, and as readers, we have no reason to doubt the very little we’ve learned from the Thrawn trilogy and the few other works that even discuss the pre-Empire galaxy. This continues into the Del Rey era, and only by the time that the New Jedi Order and Dark Nest are finished, do we definitively know how the Empire came to be. This influence is clear when reading Legacy of the Force in comparison. By the time Betrayal is published, we know so much more about the Sith of the Old Republic, their philosophies, and a reasonable idea of what Lumiya would have learned about Sith history. The Jedi have discovered many old Jedi source materials and training information, and have enough Holocrons to know more about what the old Jedi order was doing. This seamless weaving of out-of-universe straightening out of the timeline combined with in-universe discovery of lost history makes Legacy of the Force and Fate of the Jedi flow much better with the rest of the GFFA’s chronology. These two series make the most sense in a broader view of the universe, but perhaps the Star Wars universe was not meant to make perfect sense.

We all know that some of our plot holes are because significant portions of the Star Wars universe were off-limits during the years when much publishing was going on. Some events were never quite defined in canon, many a retcon was used to clean up the chaos, and some things were never resolved to anyone’s satisfaction. Sometimes, plot holes happen because of different artistic visions. Having so many authors working in the GFFA makes for a variety of impressions of how the universe should work, and large multi-book series or eras are prime places for such things to happen. Regardless of cause, the jumbled chronology makes for a universe that has so much room for possibilities.

Plot holes are strange to run into years later. When doing a re-read or examining reference books, we suddenly realize that some events don’t line up. It’s confusing to realize that large parts of the Star Wars universe don’t really fit neatly together, and when reading the EU in chronological in-universe order, it honestly doesn’t make a lot of sense. Perhaps there is good reason for readers to be advised to look at the EU in publication order: it makes all the more sense when the books are taken in both in- and out-of-universe historical context. Introducing new people to Legends is much easier when we can tell them how it doesn’t often make a lot of sense in chronological order, and that it’s easier to read the books in publication order. What if there’s something to be gained by accepting the plot holes, rather than running away from them?

Let’s look at the galaxy five years after the Battle of Endor. The New Republic has set up, and is a mostly-functional government. They’ve been on Coruscant only a short while and are increasing their membership, but are also trying to assist systems that have been particularly victimized by the Empire. The Empire is still reasonably strong especially in the Deep Core and the outskirts of the galaxy, and the New Republic can’t assume they’ve accounted for every single high-ranking Imperial official out there. Many planets and factions are still remaining neutral, whether out of distrust for the New Republic or sympathy to the Empire or desire to play both sides against each other. The New Republic has one Jedi Knight, who has been haphazardly trained and is the son of a rather prominent Sith- and neither Luke nor the rest of the New Republic know particularly much about the Sith and exactly what dark side Force-users are like. For that matter, they don’t know much about what Jedi are supposed to be like due to how much information about Jedi is simply nonexistent. The Empire has hidden and destroyed significant chunks of its own history, and it’s reasonable to assume that many of the younger members of the New Republic have heard several versions of the founding of the Empire and aren’t entirely sure who’s right. As a result, no one can definitively pin down what happened in the few years before Palpatine declared himself Emperor, and information about the Jedi is even more limited. 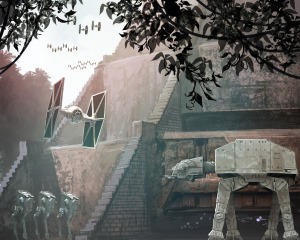 This is the perfect setting for the kinds of plot holes that we see in-universe. The galaxy is a mess, those in charge aren’t sure they’ll stay in charge or how to assert their authority, history is jumbled and has been purposefully altered, and the normal guardians of peace and justice have been reduced to one who’s poorly trained. So what if we have no idea what happened before A New Hope? If we don’t know just when the Clone Wars occurred, why should that break the whole setting? What if the New Republic themselves are having issues with the chronology because Mon Mothma and several of the older leaders remember what happened, but also are aware that the younger generation don’t know what happened and have heard so many versions of it that they aren’t sure what to believe. Luke struggles with reestablishing the Jedi simply because he doesn’t have much information about the Jedi of the Old Republic. By the time he gets significant information about the old Jedi Order and their practices, he has brought together new Jedi with different rules and a different outlook on Force usage. There is nothing wrong with not knowing all the details, with the world-building still being a work in progress. No fictional universe is complete in its first iteration, and if this one is still missing a few things until very recently, it can turn the chronology into an asset.

Sometimes we just have to laugh when reading the earliest Star Wars novels. Some of them make almost no sense at all in the greater scheme of things, and we can’t possibly accept some of the stranger things of the early Bantam era. However, there is no reason that we can’t live with the chronology not being perfect. If we are returning to Star Wars with thirty years of blank timeline, we aren’t going to get all of that filled in instantly. Let’s enjoy the journey between Return of the Jedi and The Force Awakens, and accept that a galaxy at war will be missing parts of its own history. What a great hook for a spin-off or a new novel series: discovering just why no one knows the history of the galaxy around them.