Realistically, I’m not here to answer that question and this opinion piece isn’t here to specifically address it or even focus on Darth Vader. This concept is something that has being bouncing around my head ever since my niece responded “Darth Vader” when I asked who her favorite character was in Star Wars over a year ago. I hadn’t quite figured out how to properly write up a piece concerning this topic until now. That is, until I read Tarkin. I didn’t quite realize what I was missing from the Expanded Universe until about halfway through Tarkin when a throw-a-way line caught my attention more than the entire book had so far. It was a lightbulb moment for sure. The EU had been missing depth in its villains. Even little lines about “flamboyant hats” and “frequenting the opera” give us a tiny insight into a character that otherwise we’d know nothing about. There is the depth to the Star Wars books that has been missing since the NJO.

One could probably argue that the depth was also missing from the prequels. I think there was so much political deception that they tried to keep the audience in suspense and sort of out of the loop but they did too much with that. We all knew Anakin Skywalker was going to turn into Darth Vader and we all knew Senator Palpatine was going to turn into the Emperor. Think of how little was known about Count Dooku, who was the main focus villain for half the trilogy. We rarely saw him on screen without being in a confrontation with the heroes. Whereas in the original movies we frequently followed Vader as he interacted with various Imperial officers during the daily operations of the Empire. There wasn’t anything added to the mystique or intrigue of the Emperor, the Sith or the Empire. The depth that I enjoy and had come to expect from the books just wasn’t there.

In the EU we’re not even getting a fraction of that out of our enemies anymore. With no depth to the villains of Star Wars, there is something lacking for each story. The problem started post-NJO. The books got smaller and I believe this is because the authors stopped writing about the villains in the books. That is, until now. Tarkin by James Luceno is setting up the new EU to do things the right way. For years fans have been asking for an Imperial version of the X-Wing series and I’m going to lobby for Luceno to essentially turn Tarkin into book one of this series. Rogue Squadron could have been titled Antilles for how similar these two books are. The two masters at battle tactics of their generations, each have fascinating and compelling stories about their beginnings and rises to power. Tarkin even pilots a TIE in this book! I never would’ve imagined that the man I saw give the order to destroy Alderaan in front of Princess Leia used to pilot a TIE on occasion. I love it. I love knowing details like that. I want to know how evil the other side is from their point of view. Tarkin gives us that. In his own words he’s ruthless in order to achieve what he wants and he doesn’t care as long as he is achieving more power and the intellectual battles with his enemies are still fascinating to him. 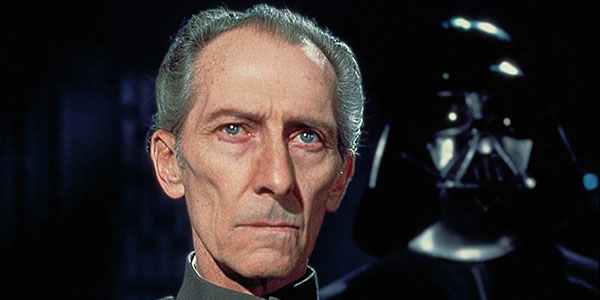 I admit to being a little worried when I started reading Tarkin. In fact, I had the books several weeks before I started reading it. I stared at it a bunch. I was worried. As a Rebellion girl I wasn’t particularly excited about reading about the deaths of early Rebels. However, this story was written in such a way that while Tarkin was squashing an uprising there was so much more depth that I sort of found myself cheering for him. Trust me. That was weird for me. It wasn’t easy for me to cheer for the Empire but by having Tarkin so immersed in his blunt way of thinking and ruthlessness I found myself cheering for him because he was so unabashedly evil. This was something missing from the EU. Luceno made it difficult for me to not want Tarkin to succeed. There are people out there who like to like the villains. My dad is Slytherin to the core. Disney has clothing lines dedicated to the villains. Why have we gotten away from developing the villains? I respect a villain who likes to be a villain. Tarkin gave me that. Thank you. 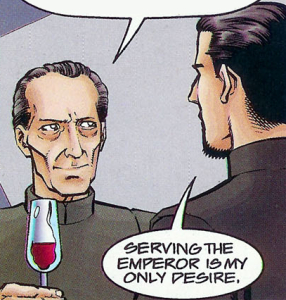 Without reading his backstory I wouldn’t have the respect for Tarkin that I do. To be honest, as a character in the original film I hated him because he blew up Alderaan. Other than that I wouldn’t give him another thought. Now that I know his story though I would definitely read another book about him, and certain things from the original film make more sense, like his ability to tell Vader to back off. It always bugged me that Vader was supposed to be this powerful Sith, yet some military dude could tell him to knock it off and he listened. Tarkin’s position wasn’t just given to him despite being born into power. He had to use his intelligence and hard work to achieve his status within the Empire and all of the training he was put through prepared him to be the military mastermind he became. One of my favorite scenes from the book is the story of why his ship is called Carrion Spike. Tarkin and Vader are talking as old battle buddies would while sitting around a tapcaf telling old war stories, except they’re freaking Grand Moff Tarkin and Darth Vader!

Depth of the villains in the Star Wars universe is something that has been absent since the NJO. I don’t know if authors just don’t know how to write villains anymore. If there was pressure to decrease the page count and in order to do that they cut out the backstories of the villains in order to keep the ever growing cast of Star Wars good guys getting enough page time to assuage the fans. I’m delighted and relieved that the new EU is starting the trend of properly developing the bad guys and I hope this trend continues even in books that center around the Rebellion.