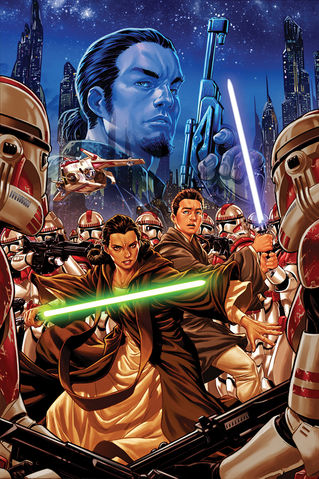 I have a secret to share with you. Are you ready? Maybe you should sit down. Here it comes: I love continuity.

Crazy, right? We’re all about the new canon here at Eleven-ThirtyEight, so naturally we couldn’t be happier to have ditched all that old Expanded Universe nonsense—that was the point of David’s piece last Friday, wasn’t it? Continuity gets in the way of storytelling? Well, no, it wasn’t actually—but hell, let’s say it was. When David singled out the Legacy of the Force series as something that put off non-diehard Star Wars fans, he wasn’t talking about worldbuilding continuity like the details of the Corellian system or of Mandalorian society, he was talking about backstory—who is Lumiya exactly? Why is Han’s cousin running Corellia? What’s a Vergere?

We’ve previously discussed the post-reboot status quo in terms of worldbuilding (mostly the same) versus plot (mostly different). But now that we’ve settled nicely into that framing, I want to talk about it a little differently: story continuity versus character continuity. Let me note up front that while I’m responding somewhat to David’s piece, this isn’t really a rebuttal or an agreement, it’s just a different angle. That’s important: there’s always a spectrum of angles from which to view an issue, and being able to appreciate at least a range of them will make you, in my opinion, both a better fan and a more contented person.

When I read the first issue of Greg Weisman’s Kanan: The Last Padawan last week, I couldn’t believe what I was seeing. In the first handful of pages, there were not one but two very clear allusions to the events of Matthew Stover’s Shatterpoint, one of the most significant (or at least most infamous) EU stories of the prequel era. When Star Wars Rebels was ramping up and it was revealed that Kanan had been Dep Billaba’s padawan, EU fans’ immediate reaction was a more acute version of the reaction to the reboot announcement itself; it’s one thing to hear that a story no longer “counts” in the abstract, but quite another to see it directly contradicted by a canon story. Shatterpoint famously left Depa in a coma at the end, one from which the EU never revived her, so as far as anyone knew, Order 66 came around and Depa died in a bed somewhere. For about a decade, that was the end of her story.

Then Rebels came along, and by making Kanan Depa’s padawan seemed to imply that the whole coma thing had never happened; certainly she never could have run off to the jungles of Haruun Kal and cracked up if she had ended the war with a new apprentice in tow? When she appeared briefly in the opening of A New Dawn, you could’ve been forgiven for not recognizing her; not that she acted out of character in any distinct way, but this wasn’t the Depa we knew, this was Ultimate Depa—glorified extra from Episodes I and II, and that’s about it.

Once it became clear that some version of Shatterpoint had still happened, something clicked in me—I knew who this character was again, and her impending demise suddenly mattered to me, beyond what it meant for Kanan. With this newfound knowledge, I consulted with some of my fellow EU fans, and on the whole I would summarize their reactions as “yeah, and?” This didn’t seem like a big deal to them; welcome, maybe, but hardly outside the boundaries that the reboot had laid out.

I had to sit with it for a while—on paper, it wasn’t that big of a deal, or even unprecedented. Tarkin had alluded to the events of multiple previous James Luceno books, for one, and in Shatterpoint‘s case, frankly, I’m not even that huge of a fan of the book, so this wasn’t just a matter of my pet EU thing being dusted off and put back on the shelf (no, that’d be Winter and Tycho). So why did this feel important?

Back in October, Luceno gave a pre-Tarkin interview in which he was asked about the effects of the reboot on his writing. He responded in part, “I think going forward what may happen is you may see writers writing around some of that older material that’s now classified as Legends – writing around it rather than trying to overwrite it. This is a new development, so I think we’re going to have to wait a while to understand what this so-called ‘new canon’ is about.”

At the time, this was an encouraging sign, but one that seemed tied very closely to Luceno himself. He’s the Continuity Guy, after all, so if he’s writing something new and it’s natural to address the events of something else he wrote, of course he of all people is going to do it. It was nice to know he still had the freedom to do so—at this point it was still reasonable to assume that authors were being explicitly instructed to disregard the EU as much as possible—but expecting it from the franchise at large, especially new authors, was another story.

Enter Greg Weisman, cult-TV luminary and total Star Wars newbie. Rebels was Weisman’s first step into the Galaxy Far, Far Away, and being a big-shot TV guy on top of that, he’s the absolute epitome of someone you’d expect to not bother referencing old Legends stuff—right? Well, according to his fans, he’s actually a big fan of continuity, and appears to have made a special effort to leave room for Shatterpoint here, but this isn’t about him personally any more than it’s about Luceno. The important thing is, we now have not just EU events in the canon but the EU version of a character’s history and 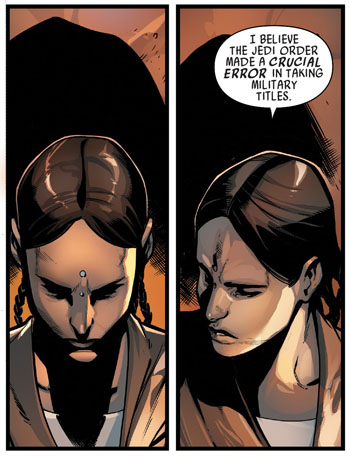 personality—only in broad strokes, yes, but more than many of us expected to get. And both came about seemingly of the authors’ own accord, with neither encouragement nor obstruction from Story Group.

So what does that mean going forward? I think it’s easy for EU fans to feel like the entire galaxy was yanked out from under their feet last year, but the reality is, this is an enormous universe, and just looking at the subset of characters who originated in a movie and were expanded upon by the EU, the vast, vast majority of them are never going to have their backstories discussed again. At the most, the only way we’re ever going to see Sebulba or Toryn Farr or Momaw Nadon again is in a future reference book, and not only are those typically given to the most continuity-friendly authors of all, but purely from a time and resources standpoint, they’re not going to tell Dan Wallace or whomever to come up with new backstories for the entire crowd at Jabba’s Palace any more than they’re going to invent a new name for Ithorians just because—I was making that point even before the reboot, in fact.

The truth is, if you want to believe the backstory of your favorite second- or third-tier movie character is still canon, there’s a 90% chance nothing will ever tell you otherwise. That leaves, of course, a number of characters whose story areas are still in play—the post-A New Hope Rebel leadership is a good example, with Bren Derlin showing up in Heir to the Jedi and Ackbar and Mon Mothma in Princess Leia. There’s no way to know how many of these characters will ultimately be different from their EU incarnations, but what Kanan demonstrates is that there’s far less reason to fret about it than we’ve perhaps been expecting.

With that in mind, the next real test of this philosophy will be Quinlan Vos’ co-starring role in July’s Dark Disciple. While Quin’s characterization in The Clone Wars wasn’t quite what his fans would’ve expected, his psychometric abilities remained intact, and early details about the novel suggest a major focus on both his and Asajj Ventress’ dalliances with the dark side. Readers of the Republic comics can tell you that no one has a more convoluted Clone Wars plot than Quin; dark side, light side, general, renegade, assassin, lover of tattooed women (okay, that part will probably stick), and on and on. What’s especially interesting about Quin’s case is that his story has been up in the air since all the way back in 2008 when TCW premiered and rejiggered the whole Clone Wars timeline; what that means is that, well, the exact Quin we know is already gone. Nothing Dark Disciple can do would recanonize his entire Clone Wars plot, but elements of it can certainly stay, as can basically all of his pre-Clone Wars material. Add to that author Christie Golden’s history with the EU, and I’m expecting a very familiar Quinlan Vos to show up. Not quite the same story, but the same character.

Which brings me back to my initial point—why is that so important?

Continuity doesn’t hinder storytelling, but it doesn’t necessarily help it, either. When most people speak fondly of continuity, they’re not really talking about which sector Ord Cestus is in or whether TIE fighters have life support, they’re talking about familiarity. They want to know that when they open a book about Luke Skywalker, it’s the same Luke Skywalker they’ve been reading about for umpteen years now, because that history with the character has weight, and can make even a bland story more compelling, or send a great story into the stratosphere. It’s why people keep tuning in to their favorite sitcoms seven or eight seasons in; you’re probably not going to learn anything new about George Costanza after 150 episodes of Seinfeld, but getting to spend more time with him is its own draw. That’s a valuable thing, and for Star Wars to throw any more of it away than they absolutely have to (and make no mistake, they’ll have to) would be a reckless waste.

The Depa Billaba of Shatterpoint was a fascinating figure; loyal to Jedi ideals, but smart enough to see that something was wrong and unafraid to seek out her own solution. Far more than the exact details of Shatterpoint itself, that character had value and deserved more than to be shot in bed by the 501st in a story that was never going to be written. I had become so used to the idea of the reboot that I hadn’t realized what a loss that was until we got her back.

4 thoughts to “Continuity, or Why Kanan #1 is a Big Deal”