The very starting phrase of Star Wars is the thing that starts the myth-making. “A long time ago in a galaxy far, far away” makes it clear that this is a different sort of story. It is set in space, but it isn’t just a science fiction story. There are mystical Knights with superpowers and swords coexisting with spaceships and sentient robots. The universe as a whole is so much less futuristic, and much more fantastic. This feeling surrounding Star Wars makes it seem less of a futuristic sci-fi tale, and more like something out of mythology. The clash of technology helps so much in this- the imagery of stormtroopers and Sith wearing a lot of armor evokes images of both robots and medieval knights, Jedi and Sith using lightsabers and disdaining blasters, and all of the lost and backwater planets. It’s not the setting of a future, even a dystopian one. It’s like a future civilization’s view of its past, with wildly disparate technologies and unusual powers. As soon as you head out of the highly technologically advanced galactic core, the backwater worlds, odd artifacts, reclusive species, and lost history add to the mythical feeling. It’s hard to have a good legend without a few undiscovered areas, and when there’s an entire chunk of the galaxy labeled as ‘Wild Space’ and another as the ‘Unknown Regions,’ that practically has a giant sign on it saying ‘please send adventurers here.’ What better setting could there be for a 20th-century legend?

The ramp-up to The Force Awakens is full of speculation and rumor-mongering. No one really knows what’s going on, even if some of the rumors we hear have had a decent amount of truth in them. Information suddenly turns up, and depending on who you ask, the plot of TFA could include anything at all. What stories will we tell about the wait for TFA? All of us who are in the Star Wars fandom will have a few good tales of how we found out about the cast, how we found out about the title, where we were when the teasers were released, and the wait for December 18th. This is a part of the myth of Star Wars; our experiences as fans are a part of the story. There are so many different stories we’ll tell about the months leading up to TFA, just as a lot of us have a story of what we were doing when news came out about the prequels. This isn’t just about in-universe storytelling; the fan experience and the culture of Star Wars fans is now a part of the story. 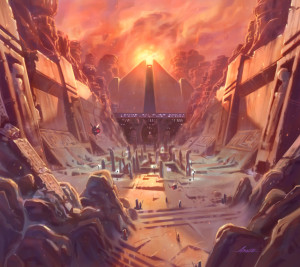 The vastness of the universe explains so much about the mythical feel. You can watch the movies, and never realize there’s anything further out there. And then you might stumble upon Jedi Search in your English teacher’s bookshelf in seventh grade. Or you find one of the novels in a library. Or you see one of the video games on the store shelf. There’s no way now to escape the ubiquity of Star Wars, and once you realize that there’s so much more out there than the movies, the universe multiplies in size. The growth rate and all of the tie-in materials are truly remarkable; other than WoW, how many other universes have this kind of extended universe? Not a lot, to be honest. There are constantly unexplored corners of the universe, new things to be found, and new possibilities for stories. Myths always do have new stories being told or discovered, especially if the story is slightly different each time.

Mythmaking doesn’t happen overnight. It’s taken nearly forty years, and now Star Wars is thoroughly enshrined in pop culture. From a small story whose influences included myth and legend and the hero’s journey to one of the most iconic pieces of American popular culture, Star Wars is everywhere. Its story has changed over the years, and with Legends being decanonized, suddenly the myth has been made all the more apparent. There are several ways the story could have gone, as already proven by the various things that have been canonized and decanonized over the years. There might be one consistent story, but between all the speculation and how many changes that have been made to canon, we never know what we’re going to get. We can indeed just enjoy how our favorite fandom has become something even greater- just look at the amount of academic papers written on Star Wars. Even I’ve written one.