Remember when the theatrical trailer for The Force Awakens came out, and JJ said there wouldn’t be any more? That was a little over a month ago now, and it seems like every other day since there’s either an international trailer (semantics!), a new TV spot, or even an actual clip of the movie coming out. As the new bits and pieces continue piling up, lots of people who started out content to see whatever the marketing people chose to show us have begun wondering if enough is enough.

Going solely by videos on the official Star Wars YouTube account, there are four distinct TV spots so far, but that’s ignoring several others—some which are pretty new and perhaps just haven’t been added to the account yet, and others which are especially short and/or not very distinct from the others. All told, it’s hard to be sure exactly how many different spots are out there.

But what I’ve been wondering is, what does all this material add up to, in terms of actual content from the movie? It feels like we’ve seen a lot—and indeed, too much according to many—but how much distinct footage have we seen already, with a little more than three weeks until the film’s release? I decided to find out.

While I named this site Eleven-ThirtyEight partly in honor of one of my inspirations, FiveThirtyEight, the fact is that we’re still just a fansite. We don’t have the resources to hire polling firms to find out which film is people’s favorite, and even when hard data is readily available, like say, box-office figures, I’m hardly a statistician, so my number-crunching abilities are those of a dedicated amateur at best. So as I’ve done in the past, I’m compelled first to present some caveats:

With that out of the way, here’s what I ended up with.

First off: these times are the total amount of actual footage—I removed all logos, credits, etc. For simplicity’s sake, I converted the running times into total number of frames; Teaser 1, for example, has 41 seconds and 18 frames of footage. 41 times 24 (frames per second) is 984, plus 18 is 1002 total frames. And so on. The next stage was the real work: combing through each video for every scrap of new material, sometimes as few as five frames at the beginning or end of an older shot, and adding it up. Obviously, the first two teasers were entirely new. Next came the fifteen-second Instagram teaser, which was all new except for a quick reuse of Kylo igniting his lightsaber from the original, which came out to 87.5% new footage. The theatrical trailer ticked back up a bit to 94.4%, but since then, the only release to be composed of more than 60% new material, unsurprisingly, is the fifteen-second clip from a couple days ago.

The TV spots are kind of a crapshoot, but I made a point of including one very recent one—#6 by my count—that I knew only had about two seconds’ worth of new footage, as a representative example of what I believe most of the things I excluded to be like. TV spots 1-4 are the four on the official YouTube account, and they all hover in the area of 50% new. As anyone who’s been paying attention could tell you, the fifteen-second clip, while nice, also happened to be a scene that we’d seen bits and pieces of many times before this week—thus, only about ten of those fifteen seconds were actually new. So we can conclude from the above that the proportion of new footage has trended down somewhat, but not remarkably so. On the other hand, here’s what those proportions mean in actual quantities: 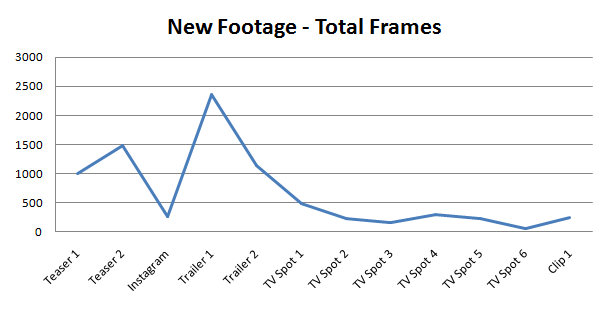 Now, this is a lot more interesting. The Instagram teaser, while almost entirely new, was so short that it still shows up as a huge dip in what is otherwise a very linear buildup to the crescendo of the theatrical trailer. The international variant comes along a few days later and while the spine of it is largely the same, it still adds about half as much new content as the first one. After that, though, the TV advertising, even counting the clip, are a relative trickle—on average, those last seven entries contribute about ten seconds each to the total.

So, have they maintained a steady stream of new footage over the last month? Technically. But the entire TV campaign put together is still way less than the big helping we got on October 19th, and I doubt that’ll have changed much by December 18th. At most, think of it as a third trailer, cut into ten pieces or so and dished out about ten seconds at a time. The rest of it is just showing us the same stuff over and over again (and by “us”, I mean of course not us, but your average TV-watcher whose ticket money is slightly less assured).

All together, the cumulative running time of these twelve videos (again, excluding titles) is eight minutes, two seconds, and eight frames. Out of those eight minutes and change, the total amount of unique footage adds up to five minutes, thirty-one seconds, and twenty-two frames. If you sat and watched them all back-to-back, you’d be seeing new footage about two-thirds of the time. And if the reported running time of two hours and sixteen minutes is correct, then the next time someone curses Disney for showing too much of The Force Awakens ahead of time, you can reassure them that we’ve only seen about 4% of it.

But wait, there’s more! Part of my process for this involved color-coding the shots by location so I could quickly scan for certain ones; I ended up dividing everything into six categories: Jakku; “Jakku Raid” (my name for the nighttime stuff with Kylo and the flametroopers); Takodana (which I classified as “everything in a temperate climate”, because I’m not totally certain the rebel base and Maz Kanata’s castle are on the same planet—though they totally are); Starkiller Base, “Lightsaber Forest” (the Kylo/Finn snow battle, which I imagine is also Starkiller because c’mon, two snow planets in one movie??); and Space/Unsure, which was mostly stuff on the Millennium Falcon or generic Imperial hallways that could be planet- or ship-based. Here’s the total (cumulative) amount of time we’ve spent at each location: 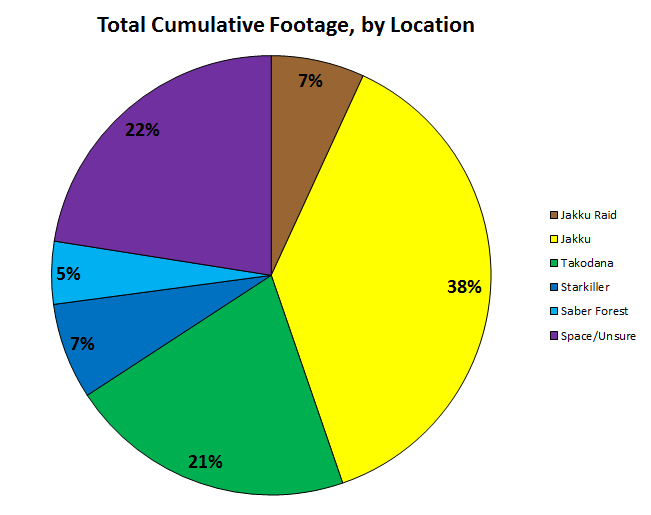 I don’t have any real conclusions to draw from this, I just thought it would be interesting—surprising no one, we’ve spent the most time on Jakku, and the least in the Lightsaber Forest, where some serious shit is likely to go down (though “Lightsaber Forest” would make a great location in the new Disney Star Wars park). Discounting the purple slice, which is effectively “miscellaneous”, this looks like the most logical sequence for the movie to follow—first act on Jakku, second act on Takodana, finale at Starkiller Base. It’s natural that the later in the movie a scene is set, the less likely they are to put it in a promo, but it’s cool to see that actually come through in the numbers.

In conclusion: I should point out that I actually kind of didn’t want to do this. Drilling down this hard into the footage meant piecing a few things together that I hadn’t already, which for someone who’s not especially anxious to know the precise structure of the movie was a little unfortunate. And just from an editing standpoint, I saw some of these shots so many times that when they finally pop up in the movie it’s bound to pull me out of it for a moment—the same way seeing a new take of “Chewie, we’re home” would for people who watched that teaser a million times—and suddenly I’ll be watching as an editor, not as an enraptured fan. But I thought this would be useful information now that Peak Star Wars is on the horizon, and the fact that the magic number ended up being as low as four percent bore that out: just because we’re seeing a lot of The Force Awakens these days, doesn’t mean we’re seeing a lot of it.

4 thoughts to “So, how much of The Force Awakens have we seen already?”