It’s been almost three hours, and the thought I keep coming back to is how little we still know.

I had a few rough ideas prior to this evening for angles from which I could explore The Force Awakens in the aftermath of my first viewing, all of which had some real weight to them, but at a certain point the brain is gonna do what it’s gonna do, and that’s the Big Takeaway for me right now: everyone has been talking, and will continue to talk, about the various ways this movie restages things from A New Hope, but the forlorn desert dweller, the droid with vital information, and the superweapon, honestly? They’re superficial. The thing that The Force Awakens reproduces most perfectly from ANH is the sense of being plopped down into a strange galaxy without your bearings, and being caught up in momentous events before you even come close to getting them back.

For the seventh part of a serialized story, it’s kind of amazing how much (and how effectively) this movie operates with basically zero context. Most of the things us continuity dorks have been fretting over aren’t any clearer now than they were last week. Where’d Starkiller Base come from? Doesn’t matter. How big is the First Order? Big enough. Is the New Republic still around? Yes, but its capital was just blown up? I guess?

This is a movie where I spent ten minutes or so, until someone said “Hosnian system”, basically convinced I had just seen Coruscant get destroyed. There was also that weird shot where people seemed to see it happen in the sky above Takodana, so honestly I’m not totally sure what happened there. I’m deliberately writing this before I read any other deep analyses of the movie, so maybe this is a lot more clear to other people—or at least is made clear in the novelization and the supplemental materials, which I guess went on sale about an hour ago—but I can’t help but respect how little expository fat there is in here, when what remains is so completely entertaining. I was shocked and confused by the firing of Starkiller Base, and I still am, but before I could even attempt to process it the movie had moved on to the next battle and taken me with it.

This is where the new cast were vital: if I didn’t really care about Rey, Finn and Poe, the canon minder in me would’ve spent the rest of the movie puzzling out the ramifications of what I’d just witnessed, but instead I was busy worrying for the newbies’ safety. I love each and every one of them, and I’m excited to learn more about them—because once again, we didn’t get anything the movie didn’t absolutely need to tell us. Kylo Ren is every bit the hot mess I had hoped he was, but how the hell did he turn to the dark side? And was this five years ago? Ten? Twenty? Finn having indeed been raised as a stormtrooper from birth, not even having a regular name, is going to open up some very interesting ideas for the sequel trilogy to explore (and expect to hear more on that from Jay next week), but his sudden change of heart is very interesting and mysterious itself.

Come to think of it, we don’t even really know what the titular “awakening” is, or what it means for anyone. Maybe Finn (and a bunch of other people?) woke up one day and was suddenly Force-sensitive, and that gave him a sudden rush of empathy that he’d never experienced before. Or maybe Rey is Luke’s child and a new Skywalker coming onto the board, galactically speaking, is what Snoke was sensing. Or maybe it’s something totally apart from all the characters and events the movie depicts, and we’ll only come to understand its significance as the trilogy continues to unfold.

And speaking of Rey, talk about a mystery. The fact of the matter is, us Expanded Universe fans have been spoiled for context for a long, long time, and while I still believe that gives us a valuable perspective on the sequels, I’m coming to respect the reboot’s effect as an equalizer—I can point out the shades of Agents of Chaos in Han’s recent past, and the fact that once upon a time “Ben” was Luke’s kid, not Han’s, but while I recognize aspects of this story, I can’t begin to guess how it pieces together. And Kylo is the character whose history the movie wants us to know about; we don’t learn a damn thing about who Rey is or how she ended up on Jakku. All we know is she’s as powerful as Kylo (or more?) and the Force Theme loves her. I can’t give you a shred of evidence that she’s a Skywalker, but she exudes Skywalker every moment she’s on the screen.

This degree of not knowing what the hell is going on is something that’s lost on the EU generation of Star Wars fans and those that have come since—unless you were watching the OT in theaters as it was coming out, Star Wars was to some extent a binge-watching experience (even I, of the Special Edition generation, saw them over the span of only two months), and it’s been that way for a very long time. The prequels came with their own three-year waits, of course, but we at least knew the broad strokes of where they were going, and things only got clearer as they went on. Compare that to TFA, where I honestly didn’t know if Coruscant itself had been destroyed—because hell, it could have been. A little later, I found myself actually thinking that Starkiller Base might destroy the Resistance headquarters and take Leia and the others out of the ballgame. I didn’t expect it, but it was possible.

Especially after that one guy they did kill. It reminds me, actually, of the end of Vector Prime. Then it was Chewbacca whose demise had allegedly ushered in an era where Anything Could Happen, and Han underlining that point for the audience:

“So many times, it seemed, one or more of them should have died.

And yet, in a strange way, that close flirting with death had only made Han think them all the more invulnerable. They could dodge any blaster, or piggy-back on the side of an asteroid, or climb out a garbage chute, or…

But not anymore. Not now. The bubble of security was gone.

To Han Solo, the galaxy suddenly seemed a more dangerous place by far.”

The EU never really followed through on that; the younger generation of characters went through a veritable meat grinder, but the Big Three remained untouchable. That’s done now. If The Force Awakens accomplishes one thing above all else, it’s collapsing every generation of fans into the experience of the original one—we no longer have any idea what Star Wars is going to do next. The Big Three are over. 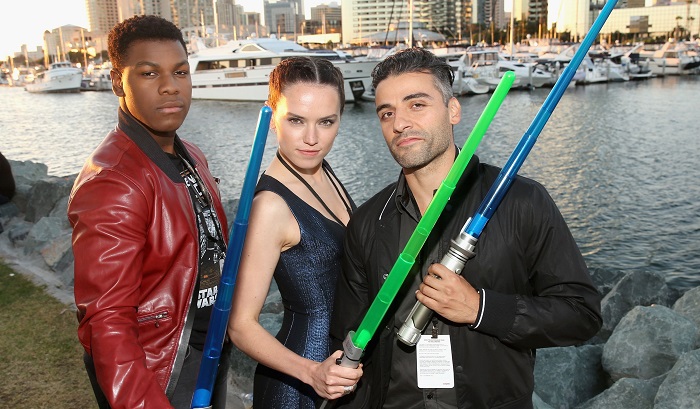