It’s December, and we are officially less than twenty days from the release of Star Wars: The Force Awakens. If you’re like me, you’re juggling work, the holidays, the inescapable excitement of the upcoming film, and some kind of re-watch of the first two trilogies (with perhaps some Clone Wars sprinkled in). And you’re doing it with friends – friends with questions about why and how the Republic fell, where exactly Darth Vader falls in the Imperial hierarchy, the relative autonomy and purpose of a protocol droid, and, naturally, where the new characters of The Force Awakens fit into the sprawling scheme that is the galaxy far, far away – and who they’re related to.

It’s not the easiest question to answer. You could recite the talking points given to the actors, or quote director JJ Abrams’ cryptic but brief epilogues for Rey, Finn, Poe Dameron, and Kylo Ren. You could also launch into an explanation of the plot, uncovered and expounded upon over the course of the year by the spoiler community, or instead pivot to fan theory and speculation about who’s related to whom, some strong but some still very silly (Finn is NOT Lando’s son, folks).

Or you can share what I’ve been saying recently: it doesn’t matter, because they are all some version of Luke Skywalker.

During the August rollout of Entertainment Weekly’s exclusive The Force Awakens coverage, JJ Abrams announced that he had been persuaded to direct the newest installation in the saga by a simple question, posed to him by Lucasfilm chief Kathleen Kennedy: “Who is Luke Skywalker?”

For readers of the Legends era of Star Wars, Luke Skywalker is a powerful Jedi Master, but also a brother, an uncle, a husband, and, eventually, a father. He has been rescued from the Dark Side and has rescued others, as well. He has known incredible loss, failure, and conflict, but also success and peace. And regardless of your opinion of how the Legends era wrapped up, Luke Skywalker became a wonderfully nuanced character with a rich history and legacy.

But for casual Star Wars fans, the original trilogy tells the story of Luke’s hero journey, and the hero’s journey has many paths. Luke was a Jedi, but he was also an orphan, a pilot, and a brother. When you begin to examine these parts of Luke’s character and the paths taken – and not taken – you immediately begin to see reflections in the new core of characters being presented to us in the run up to The Force Awakens.

“You don’t know a thing about me—what I’ve seen.”

Finn, The Force Awakens’ wayward stormtrooper turned reluctant hero, reflects the potential future as the ‘Imperial everyman’ for Luke Skywalker as well as the future he seemed to want for himself at the beginning of the trilogy. All fans remember Luke pleading to Uncle Owen for his chance to follow Biggs to the Academy, but that doesn’t mean Luke would have become the pilot he dreamed of. Not every Imperial institution is Carida or the Royal Imperial Academy. Instead, young Luke could have been shuffled off to a regional Imperial academy like Lothal’s and been exposed to inadequate instructors a long way from the Core, or worse, scooped up by an Inquisitor due to his innate talent and curious last name.

If Luke had made it to the Imperial fleet, as a TIE pilot, an officer, or even a stormtrooper, the cruelty of Imperial rule and governance may have driven him, like Biggs Darklighter, Thane Kyrell, and now Finn, to set off on a very different journey.

Rey is being presented to us as the heroine of The Force Awakens, and Luke’s analogue in the new trilogy. “I know all about waiting,” she says to BB-8 in the international trailer. Luke, too, was waiting when we first met him; waiting for another season to pass and a chance to put in his application to the Academy. Rey is dressed like Luke, on a barren desert planet with a job that seems economically unsustainable given
the circumstances, and, perhaps most importantly, she too finds a droid of destiny that helps send her on her journey.  They both represent the archetypal humble origins of the ‘hero.’

Without her own Uncle Owen and Aunt Beru to watch over her (or Ben Kenobi for that matter), it is easy to see Luke’s own uncertain future on Tatooine after the death of his family had he chosen to ignore the hero’s journey and stay behind.

No matter how you parse the canon, Luke is an exceptional pilot. He destroys the Death Star and by The Empire Strikes Back leads the Rebellion’s most elite fighter group. His growth as a starfighter pilot and commander is hard to gauge, as he is called away to pursue his Jedi training full-time. Wedge Antilles, who inherited Rogue Squadron from Luke, was also an exceptional pilot and a thoughtful and strong leader, but one who was ultimately conflicted between his obligation to his pilots and to the cause of the Rebellion (and later, New Republic), turning down promotion after promotion to serve how he thought best.

Luke, too, resigns his commission after the events of Matthew Stover’s Luke Skywalker and the Shadows of Mindor, and his knowledge of the role of the Jedi in the Clone Wars may have influenced his own relationship with the military. But Poe Dameron provides another glimpse of who Luke could have become, faithful to the leadership of Leia Organa and ready to fly to confront a new and grave threat.

“I will finish what you started.” 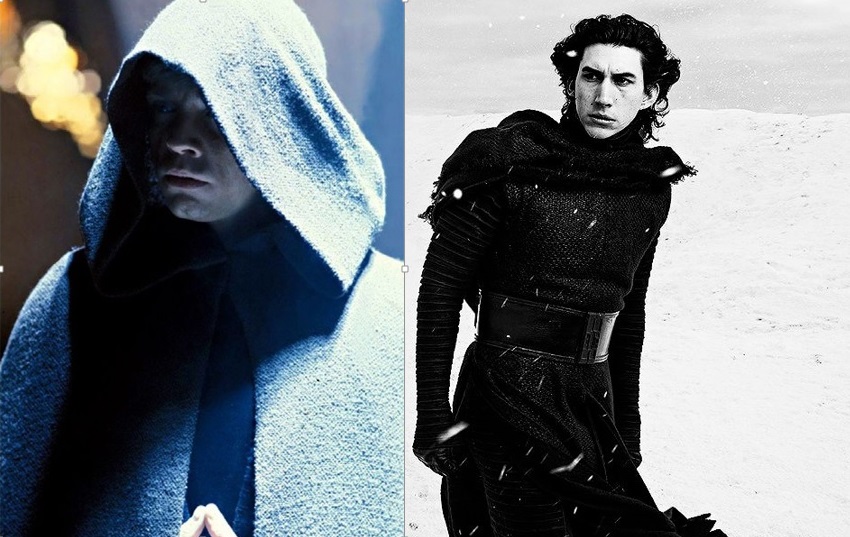 The first thing that Luke Skywalker learns about Darth Vader is that he was “seduced by the Dark Side of the Force.” ‘Falling’ to the Dark Side almost seems accidental, or unintentional at best. Vader was manipulated and seduced. Had he discovered his son at a young age, he would seduce a young, impressionable Luke Skywalker the same way that Palpatine seduced a young, impressionable Anakin Skywalker – by convincing him of his strength, his uniqueness, and his righteousness.

Righteousness is the key word in describing Kylo Ren. Adam Driver, the man behind the mask, “never thought of the character as an evil person” and has insinuated that Kylo Ren views his own actions as “morally justified.” While we don’t know Ren’s motivations, it is very easy to hear those words coming out of the mouth of The Clone Wars-era Anakin Skywalker, or Kieron Gillen’s Darth Vader – both characters with a distinctive ‘ends justify the means’ attitude.

Luke was misled and manipulated by Obi-Wan and Yoda, who hoped to turn him into a Jedi powerful enough to defeat the Sith. Will we see a similar trajectory for Kylo Ren, manipulated and misled to fight a war he was too young to remember, let alone participate? Regardless of whether Ren is the heir of a certain Force-strong family, his own journey in the sequel trilogy could eventually take him down the hero’s path, just like Luke.

Many fans will see The Force Awakens to see the continuing saga of the Skywalker family. That’s great; these are movies about families, and we share them with our own. If Rey or Kylo Ren are revealed to be the heirs of the Skywalker tradition, it opens up a world of possibilities and the chance for dynamic storytelling. But it almost isn’t necessary – all of the new characters are shades of Luke Skywalker, and reflect the character he has been (or could have been) as he made his hero’s journey. They are all, in their own way, inheriting the legacy of Luke Skywalker.

Enjoy the movie, everyone.