When my daughter Anne was born, I was a bit of a lapsed Star Wars fan. As a kid in Junior High and High School I dove into the new (and not just to me) Expanded Universe. I devoured the Zahn trilogy novels as they were released, bought the monthly issues of the early Dark Horse Comics as I found out about them (I started monthlies with Tales of the Jedi: Dark Lords of the Sith and Dark Empire II), and fully embraced the Shadows of the Empire multimedia project. I saw all the Special Editions in the theatre, slowly downloaded the Episode I teaser trailer, stood in line for Phantom Menace tickets, did midnight madness for action figures, went to the very first showing in my hometown, actually did enjoy the movie, and then I went off to college, where my interest in Star Wars media in general somewhat, well, went away.

Now, to be clear, Star Wars hadn’t done anything to offend me. I didn’t rage-quit the fandom. I didn’t hate George Lucas or accuse him of doing dark things to my childhood. My notice and interest just went firmly into the periphery. I didn’t hate Attack of the Clones or Revenge of the Sith at all, I didn’t feel like they did any sort of violence to childhood memories like some appeared to have believed, but, well, they were to me, just Movies That Happened, and movies that I saw, and enjoyed as I enjoyed many of the other movies I’d seen.

When The Clone Wars animated film came out, I noted its existence, but circumstances didn’t permit me to get to a theater to see it. I didn’t have cable at the time, and didn’t have the strong need to begin watching the series as it aired on Cartoon Network when it came on.

It was, again, a thing that existed, and that was cool in theory, but not a Priority.

So then there’s this kid. My kid. A daughter. Who grows, becomes fun, and learns to talk and communicate much faster than I anticipate. And a spark grows within me with a desire to get her to be aware of and to enjoy Star Wars.

And then, BAM. There it is. I’m counting down the years, months, days and hours, waiting for the right time to MAKE THE INTRODUCTION.

She’s a little kid. Tiny. By the time she’s two, I don’t think she’d seen any live action movies before – so I concoct a Brilliant Plan to develop interest and willingness for my kid to watch a live-action film – the key, I decided, would be through familiarity with something in it. And so, her gateway would be something I enjoyed as a kid – the Droids cartoon from the 80s. I found a DVD of some of the episodes, and saw other clips and selections on YouTube, and showed them to her. And you know what? She instantly fell in love with R2-D2 and C-3PO.

We’d find ourselves, a thirty-something and a kid born in 2010, singing the 80s Droids theme song together at random times.

The Plan was to introduce her to A New Hope when she was about three and a half. But I’m impatient, and her love for the droids (and our running out of Droids content) couldn’t wait. So nearly two weeks before her third birthday, I turn to my daughter and say, “Hey, I want to show you a movie that I love. One that has Artoo and Threepio in it. Wanna watch it with me?”

And so we had Star Wars night on February 6, 2013, where my daughter, still technically a two-year-old, met Star Wars.

Later, I asked her some questions to figure out how much she understood of the plot, and its characters. She had it surprisingly good—even if she referred to Darth Vader and his troops as Darth Vader and the Chips.

A couple weeks later, because I have no restraint, we watched The Empire Strikes Back. Anne’s review? “Fantastic.”

I then used the time to introduce her to the Ewoks through their cartoon and TV movies. This was the perfect lead-in for Return of the Jedi, which also thrilled her.

I must have been going at lightspeed, because in mid-March, I introduced her to The Phantom Menace. When it ended, this now officially three-year-old immediately wrapped her blanket around herself like a cloak, declared herself Darth Maul, and started doing lightsaber acrobatics.

Concerned as to what my wife’s response would be to this, I gently suggested she try and pretend to be a good guy. She switches to a Battle Droid (“Hey! Their batteries ran out!”). Eventually, she decided that Queen Amidala is also pretty cool, and started running around barking orders and pew pew pewing things. 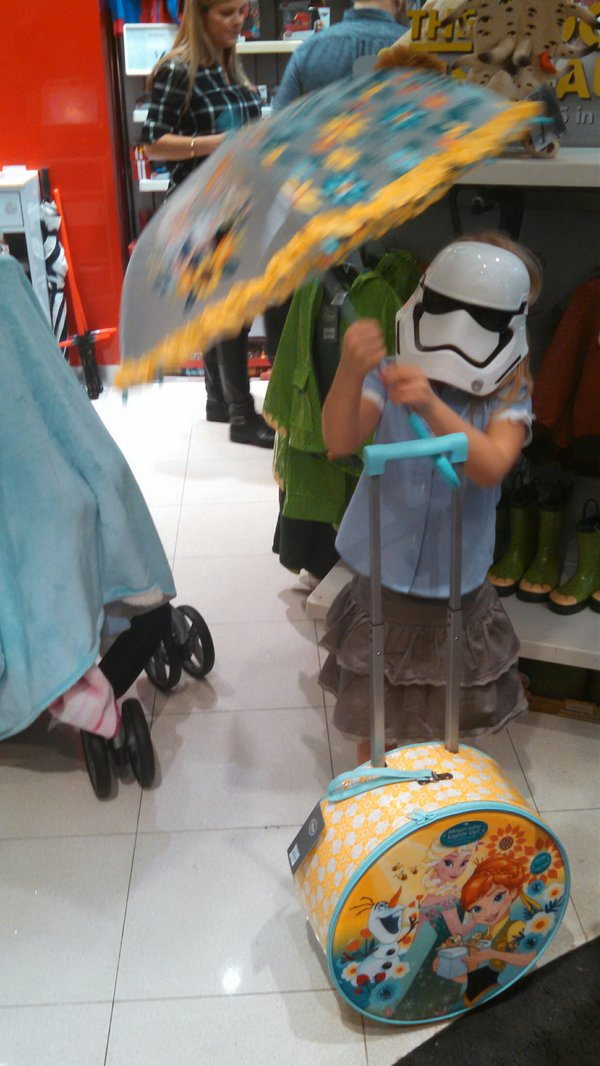 After Attack of the Clones, and wanting to delay a little bit longer the whole ‘killing of the younglings’ experience, I decided this would be the perfect opportunity for me and my daughter to experience the Clone Wars, in all their varieties. We began by watching together the first DVD volume of the Genndy Tartakovsky Clone Wars microseries – which I had seen before.

And then – something crazy was about to happen. A bit of a paradigm shift for me.

I decided that my daughter and I were going to experience, together, for the first time, Star Wars content that was Brand New To Me. We were going to watch The Clone Wars movie and series.

Turns out, we both did. A lot. More than enjoying the series itself, we used it to continue our tradition of getting up early in the morning and watching an episode together before the day got started. It was a blast. She grew up loving Ahsoka, and being enthralled by the Jedi, the clones (Rex! Fives!) and their battles. It would spark many surprisingly complex questions and conversations about why some people do bad things for what they believe are the right reasons, and how generally Good People can convince themselves that a Bad Thing is a Good Thing. And how some generally Bad People can actually do Good Things from time to time.

We finished up with The Clone Wars as season five had just come to its end, and before The Lost Missions had been released, so we moved on to the the second volume of the Genndy Clone Wars (still a favorite with her), and then on to Revenge of the Sith, which was deeply fascinating for her. We had several discussions about what would lead Anakin to do such horrible things, and to even (THE big concern for her) hurt his wife. His actions were never justified, but we again had discussions about making bad decisions that build up on other bad decisions, and the consequential web that can begin to form.

I think we watched the original trilogy again shortly after that, and she made many observations about connections she saw between the trilogies. Even some I had missed.

When I was in my Star Wars heyday, I’d bought many of the Power of the Force 2 and Phantom Menace action figures, and left them in their packages as collector’s items. I remembered that I still had them in a box in my garage. I actually remember the moment when I realized that my daughter would enjoy them, and that I would love playing with them with her.

So one-by-one (insert trigger warning for MOC collectors here), I pulled out my decade-old Star Wars toys, and presented them to my daughter, to be ripped open and, well, enjoyed.

I even picked up some additional Clone Wars-era figures that were currently out on the shelves to add characters she enjoyed and had discovered along with me. And enjoy them she did. In fact, she eventually started having Girl Only Star Wars action figure parties which were, sadly, and by necessity at the time, rather poorly attended.

And it was about that time when we learned about the purchase of Lucasfilm by Disney, and the announcement of both Star Wars Rebels  and Episode VII. I remember excitedly sharing with her the news that there would be a new Star Wars TV show, and brand new movies. Eventually, we’d be able to see a new Star Wars movie in the theater together!

Little girl about lost her mind with excitement. And so did I. Her excitement ignited mine. As new bits of material became available eventually revealing the crew of the Ghost, I’d share it with her, and she’d eat it up. We counted down the days until the premiere of Spark of Rebellion. We re-watched The Clone Wars.

She instantly fell in love with the Ghost crew, but especially Sabine and Hera. she pointed out everything awesome they did on the show, and how they were the best at everything. The Best Artist and Fighter. The Best Pilot. They rocked her world. She asked me for pictures of Hera that she could color and put up on her wall.

When The Force Awakens promotions began, and she learned about Rey and Phasma, she couldn’t contain her excitement. Phasma became her initial choice for coolest TFA character, because she was an awesome shiny girl stormtrooper. The Force Awakens’ release was incredibly exciting for us, even a year out.

One of my absolute favorite moments was when Celebration 2015 was going on. We gathered together to watch the Rebels season two trailer together. When the screen went black, and we heard the voice declare, “The name’s Rex. Captain.” – well, we both looked at each other, jaws dropped, and then we collectively lost our minds.

When they were doing the Force Awakens trailer reveal, she sat in to watch the cast and crew interviews. I had to run off to work, but she demanded I leave a tablet with the video on so she could keep watching the interviews, and see the trailer when it aired. She kept watching, and she saw the trailer (with ‘Chewie…we’re home!’) before I did.

After seeing The Force Awakens, she can’t wait to see what’s next. She loves everything about it.

But most of all, she adores Rey. She dances around the house singing Rey’s theme, and trying (not that successfully) to bang it out on the piano. Once when I asked her if I thought Luke Skywalker would train her as a Jedi, she replied, “Dad, she doesn’t need to learn from Luke. She’s already awesome.”

My daughter is a Bona Fide Star Wars fan. She doesn’t know anything about Mara Jade or Grand Admiral Thrawn, or Jaina and Jacen Solo, although she may someday. I do think it would be fun to introduce her to the Star Wars stories I enjoyed once she’s old enough to read them – but as of right now, though, The Clone Wars, Rebels and The Force Awakens are her Star Wars.

She loves them. She’s enjoying them immensely. [1]The other night, as I was tucking her in, she suddenly bolted upright. “Dad! We forgot to watch the new Rebels Recon on YouTube!” (she was right). And I’m incredibly grateful for them. My incredibly intelligent, fun, and fabulous little girl is excited about the unfolding Star Wars story. And her excitement has made me a fan again, too.

5 thoughts to “Not Her Father’s Star Wars: Raising a Daughter in the Disney Era”