“Originally, I was trying to have the story be told by somebody else; there was somebody watching this whole story and recording it, somebody probably wiser than the mortal players in the actual events (…) the stories were actually taken from the ‘Journal of the Whills’.”

The Journal of the Whills occupies a strange place in Star Wars lore. Initially part of George Lucas’s early drafts and referenced in the novelization of A New Hope, it then disappeared from Lucas’s work almost entirely (though he did return to his “Journal” notes during pre-production on The Phantom Menace, and considered referencing a “Shaman of the Whills” in Revenge of the Sith). The idea has seen a resurgence of a kind recently, though, with its reference in the novelization of The Force Awakens and with Baze and Chirrut, the mysterious “Guardians of the Whills”, in Rogue One.

Though Lucas did not make the Whills an explicit part of the story, instead developing the idea into the Force, the concept of the story being recorded in an ancient Journal, from which he is retelling it, is something he never quite let go of. In 2005’s The Making of Revenge of the Sith, Lucas revealed that the story was told to the Keeper of the Whills by R2-D2, 100 years after Return of the Jedi. The ongoing use of the introduction “a long time ago in a galaxy far, far away” – a modern “once upon a time” – reminds us that Star Wars is a fairy tale, a myth that is being retold to us, and that this is how we should look at it.

The idea of a story told through the ages, chronicled and then discovered and retold again for our modern ears, is not original to Lucas. The myths he drew upon when creating Star Wars came from an ancient oral tradition, before the written word was widespread, where stories would be told and re-told verbally. With each retelling, the story would change – characters would be added or taken away, the performer would inject their own personality into it, and some would use musical or visual aids. The result was that there was no single “canonical” version of a story, but many variations depending on the teller, and so the “written” versions we read today are never the result of just one author.

Even the idea of an author discovering a fictional ancient journal and retelling it to a modern audience is not new. The stories JRR Tolkien told about Middle-earth, through The Hobbit and The Lord of the Rings, are being brought to us from the Red Book of Westmarch – a chronicle written by Bilbo and Frodo Baggins, telling of their adventures and recounting the stories they have heard of ancient elves and men. This journal has been “discovered” by Tolkien, and he is retelling the stories for our modern ears.

The result is that many of the “inconsistencies” that arise between The Hobbit and The Lord of the Rings – often due to the “fairy tale” feel of the former, for example the comedic talking trolls – are in fact a result of Bilbo telling his story as a fairy tale, and Tolkien then rewriting it for modern children.  It is not a “factual” account of the fictional events that happened; it is a story someone is telling about those events, with a specific voice (or voices), aimed at a specific audience.

The Journal of the Whills

The Journal of the Whills was intended to play a similar role, as we can see in the prologue of the ANH novelization, which summarizes the events of the prequel trilogy as recorded in the Journal. Looking at Star Wars with this in mind gives us a different way of looking at these stories, and a new insight into what this modern era of “coordinated canon” actually means.

Take the tonal and even visual differences between the live-action films and the animated series. Stormtroopers look slightly different in Rebels than they do in the original trilogy films, but they are not intended to be different “types” of stormtroopers. They’re the same things. The difference is merely that someone else is telling us a story about these things called stormtroopers that existed, Once Upon a Time in an ancient galaxy, using a different medium and aimed at a different audience.

Similarly, there has been anxiety about the “canon” status of the original film novelizations, since they often deviate from the events as told through the films. This, I would argue, is missing the point. Both film and novelization are telling a story about an event long ago in a faraway galaxy, using their own voice and in different media. Neither is a “factual account” or historical record of what happened, and in all ways that matter, neither has more “truth” than the other. If you like, George Lucas and Matthew Stover both read accounts of the fall of the Empire in an ancient journal discovered by Lucas, and both retold the story in their own way as Revenge of the Sith.

If the Star Wars films are not an accurate “historical” account of the galaxy’s events, the idea of “canon” becomes a more ephemeral thing. Minor continuity issues, such as the whereabouts of Lost Stars’ Thane and Ciena during Rogue One, or the apparent lack of slavery on Kashyyyk in Marvel’s Chewbacca, are inevitable, and I would challenge anyone to find such a sprawling saga that does not have them. If you still feel the need to rationalize them, remember that we can never know the “truth” anyway – different people are telling us a story, with different voices, from a Journal whose accuracy we cannot be sure of in the first place given R2-D2 was not present for every event (did the Keeper seek out other people’s memoirs when compiling the Journal?). As I wrote following Celebration 2016, the purpose of the Story Group, contrary to many assumptions, is not to make sure every little continuity detail lines up. It is the development of stories.

This is why I am a fan of the recent “in-universe” reference works, the Galactic Atlas and Propaganda. They inform us about the world, but they are also stories being told by a character. They tell us something about their author, and also allow for the possibility that what they are telling us may be unique to the author’s point of view and not an objective “fact.”

A Certain Point of View

Our instinct as fans is to want things clearly defined, put into a database, and for all the minutiae of a fictional world to be detailed, consistent and unchanging. I am as guilty of this as anyone, and it is still crucial that a story obeys its own internal logic, and that characters and their journeys are broadly consistent (remembering too that human beings are often inscrutable and contradictory things). At the same time, the idea of the Journal of the Whills reminds us that Star Wars is, first and foremost, a fairy tale.

The benefit of looking at Star Wars from this angle is that it reminds us that for many elements, there is no single “right” interpretation. As with any story, we bring our own experiences, philosophies and politics to it, and will all come away with our own response. We may want an answer to what the “balance of the Force” means, and Rian Johnson, Dave Filoni and even George Lucas may tell us what they think it means, but the fun of these thematic ideas is that they are open to interpretation. There is no objective truth, and even the characters are only speaking from their own point of view.

The same applies to character backstories. If you ask Pablo Hidalgo on Twitter what happened to Barriss Offee after the Clone Wars, he’ll tell you he doesn’t know, because that story hasn’t been told yet. Why nail something down as a fact in a databank or encyclopaedia, when the fun of this universe, the entire reason for its fictional existence, lies in the telling of stories about it? Why box future storytellers into a corner for no reason? And those stories will often be as surprising to the author as they are to the reader.

In On Writing, Stephen King compares storytelling to “excavation”. The story is buried somewhere in his subconscious, and his job is to try to uncover as much of it as he can. King does not begin with a plan – he starts writing and follows where the story takes him. Whatever George Lucas may say, the evidence indicates that he did not know when making ANH that Darth Vader was Luke’s father, and he did not know when making The Empire Strikes Back that Leia was Luke’s sister. These were “discoveries” he made in the telling, and you will often hear authors talk of characters surprising them. Lawrence Kasdan says that only one element in Episode IX was planned from the beginning, in order to give Rian Johnson and Colin Trevorrow maximum creative freedom, and even that might change. He knows that a story that developed in the telling is no less valid than a story that was planned from the beginning and never changed. There are chapters of the Journal that are still being discovered. 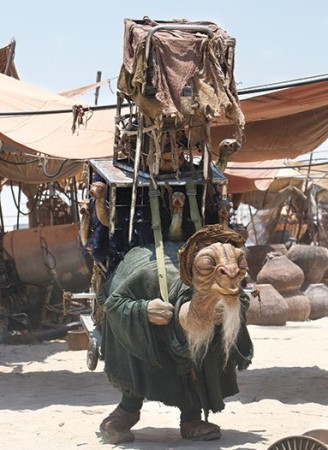 We are shown the power of stories when C-3PO inspires the Ewoks with tales of Empire and Rebellion, and in the way Rey finds hope in the myths of Luke Skywalker and the Jedi Knights. But I will leave the final word to Bobbajo, the wandering storyteller of the Jakku deserts. In Landry Q. Walker’s “All Creatures Great and Small,” Bobbajo tells the tale of the destruction of the Death Star, but from a very different point of view, with different heroes. We know, having seen ANH, that he’s wrong, that Luke Skywalker blew up the Death Star, that it’s just a story … isn’t it?

Bobbajo smiled. “Of course … it was,” he said. “But stories … they are powerful things. Never … discount their … strength.”

One thought to “Tales from the Journal – On Storytelling and “Canon””