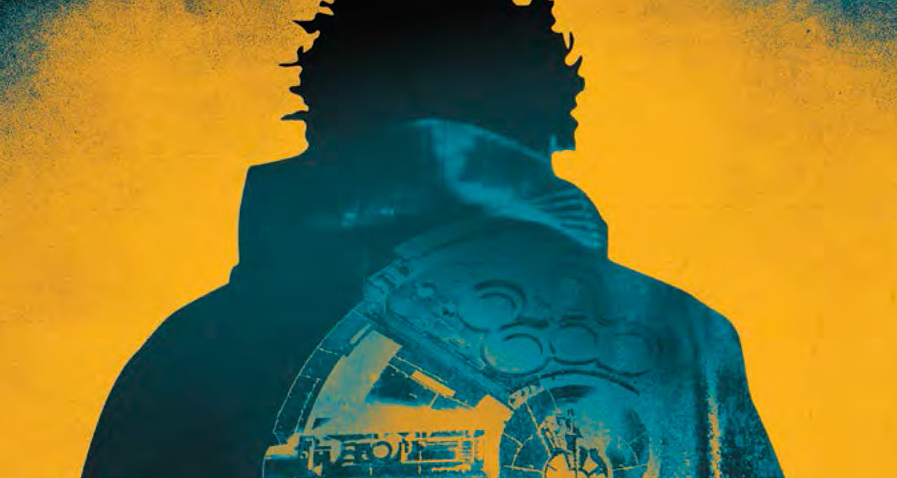 So what is it about this guy that’s driven me to latch onto him? Well, for one thing, I think Lando’s actually a pretty widely misunderstood character. The flirting and the gambling most people know him for, to pick a random metaphor off the top of my head, are like capes: ornamental details calculated to cultivate a certain impression while also concealing what’s really going on underneath.

Having become a Star Wars fan in my early teens, I think part of what appealed to me about Lando was that he seemed like the only main character in the original trilogy with an actual life as opposed to an archetype, with stuff going on outside the Epic Saga and no Grand Destiny to lure him away. Han played something like that role in A New Hope, but at the end of the day “scoundrel with a heart of gold” is just as much of an archetype as “heroic farm boy” and “noble princess”, and I was a little too old to completely buy in to them as people—Lando, on the other hand, had desires and responsibilities of his own until the events of The Empire Strikes Back thoughtlessly intruded upon them. When faced with the choice of surrendering his city to the Empire or helping capture “somebody called Skywalker”, he really could have gone either way; Han had only himself in mind when he abandoned the Rebels on Yavin, but with thousands of lives depending on him, can you really blame Lando for at least trying to play ball? It’s easy to take his heroism for granted almost forty years later so I’m grateful to the character of DJ in The Last Jedi for reminding us that these things can’t always work out in our heroes’ favor—and thereby emphasizing Lando’s ultimate choice to do the right thing.

Despite those responsibilities, though, Lando also strikes me as the closest we’ve come to seeing what a “normal” citizen of the Empire looks like. He may be successful when we first meet him, but unless Solo happens to turn him into a child of wealth whose roguish lifestyle amounts to slumming, all of Lando’s success is earned—doubly so for happening under the thumb of the Empire. From the cape on his back all the way to Cloud City, Lando built his success from the ground up, with no “Calrissian Luck” to keep him from falling on his face. [1]If I had my way, even the Calrissian name would be something he created for himself. Han should have died a hundred times living the way he does, and his grand destiny is revealed in the fact that he always walks away—but the Force doesn’t seem to have an opinion on Lando; he lives and prospers within Imperial society because he’s just that good. [2]While Lando’s race is, rightly I think, treated as totally irrelevant in-universe, there’s some interesting privilege-related subtext in this distinction between Han and Lando—but … Continue reading

This is the primary misconception people have about Lando: he may be a card player, but under no circumstances is he a gambler. His genius is that he comes off as casually breezing through life when he’s actually the most meticulous motherfucker in the room. 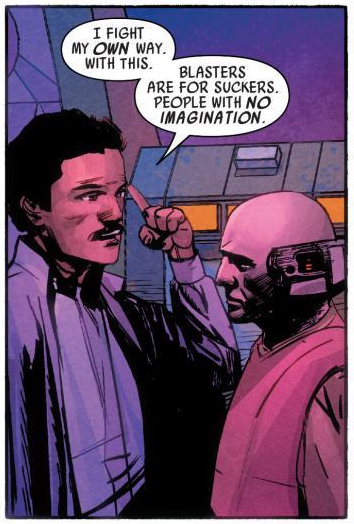 For my money, this is something Daniel José Older illustrates perfectly in Last Shot. Here Lando is introduced to a new game called Vazaveer, sort of a cross between dice and tarot cards. The first time he plays, the stakes are low and he loses half his money—after which his first move is to attempt to purchase the set of fichas, the playing pieces. When the dealer won’t sell, Han creates a distraction and he steals them. Dick move? Sure. But later in the story they’re forced to play again, with the stakes quite literally life and limb. This time, Lando’s got rigged fichas on him, and he uses them to win and save the day. Would Han have had foresight like that, or would he have just shot somebody and run off?

Oh, and for what it’s worth, Lando returns the fichas once their mission is over. It’s just business, you know.

Vazaveer is an extreme example and I don’t mean to suggest Lando cheats habitually (he does lose the Millennium Falcon after all), but it’s a great illustration of a character reputed to be a risk-taker carefully and methodically making his own luck. In the average card game that could be as simple as reading the room, the context, or the other players.

Which brings me to charisma, Lando’s other secret weapon. Is he just naturally charming? That’s a fair assumption; you can’t fake everything. But just like gambling, that gets oversimplified as hedonism when in reality the people in Lando’s life are a resource. Their esteem is a resource. L3-37 understands that beneath his attitude he really does care about her, and respect her principles, and near the end of Last Shot that too saves his life. In his final words to Lando as a conscious being, Lobot takes this even further:

“You have a power, Lando. People follow you. They willingly become chips in your game. Cards in your deck. That’s an amazing thing. It’s how you do…the things you do. We’re your luck.”

Instead of using this charisma to keep skating along from score to score, Lobot implores him to put it to good use, to “find something to believe in.” The Baron Administrator position, then, is not just Lando’s con of the month but the answer to Lobot’s question. Lando has chosen responsibility, to fix his position and build upward instead of horizontally. By framing his role in Empire this way, Charles Soule’s Lando miniseries underlines the magnitude of his choices in that film, both good and bad. Cloud City represents not Lando’s selling out, but his ascent to a higher plateau, the fulfillment of his potential. Until the Rebels show up, it’s his apotheosis.

This, I think, is where Last Shot does Lando a disservice. After atoning for his (brief) betrayal of Han by joining the Rebels and helping bring down the Emperor, Lando returns to Cloud City, kicks the Empire out, and then, with everything back to normal…starts a droid business? At its best, “Calrissian Enterprises” felt like the kind of thing Lando got up to in the Expanded Universe, just one errant venture after another with no attendant character evolution. At worst, it feels like a backslide after his time as Baron Administrator, a position he’s said to retain formally but not functionally. Furthermore, given his history with L3, Droid Justice Warrior (and that subject’s prominence in the novel), there’s something unsettling about him going into business hocking sentient coffee makers. I thought maybe that was on purpose and he would learn some kind of lesson from his encounters with Fyzen Gor, but the book’s ending doesn’t have much to say on the matter and focuses instead on his rekindled relationship with Kaasha Bateen. [3]For the record, I did really like their subplot because it demonstrated much the same kind of growth as Cloud City—Lando choosing to plant his feet rather than bounce from conquest to conquest.

I’m excited to reconnect with Lando this Thursday when I see Solo, but the next time I see him in a post-Last Shot context, I hope he’s either back to Baron-Administrating full time or, dare I say it, has moved on to galactic-scale politics. It’s funny to root for my favorite character to join a governing body I knew will get blown up in a couple decades, but if Cloud City isn’t really his apotheosis that’s the only direction I see as both viable and positive for him. “Responsible leader” is the key phrase here, and “Space Elon Musk” won’t cut it.

So why do I like Lando, a character with whom I have so little in common? I may not aspire to his superficial aspects, the ones everybody associates with him, but I do admire and aspire to the core that lies beneath the cape—a man people like and respect even when they don’t really know him, a man who’s made himself everything that he is and learned not to settle, who does well for himself but always knows deep down he could do more.