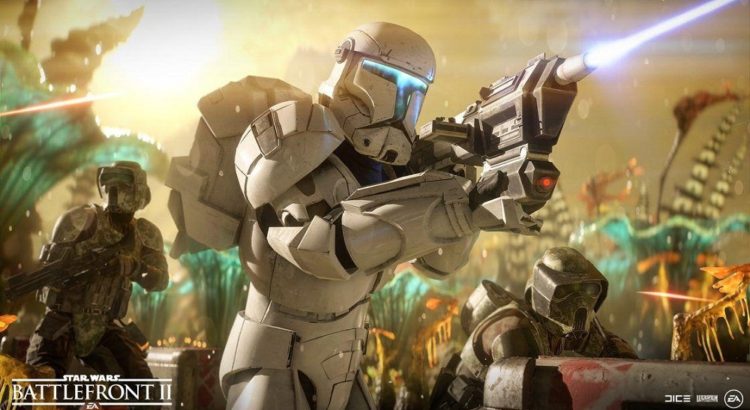 Is it possible to overhaul a video game so radically that it becomes almost an entirely new, better product? I think so, and I think Battlefront II proves it. After well over two years in release, Battlefront II has been revitalized with new game modes, playable characters, and skins. The wealth of new content is a shot in the arm that’s resulted in a completely changed game.

I don’t really play a lot of online shooters. I’ve dabbled in Battlefield and Call of Duty as much as any other gamer, but I’ve never really been able to get into them. Getting good at these games requires a lot of effort and playtime. So, it was to my great relief that I discovered the new modes in Battlefront II don’t require that.

The most striking new addition is a Co-Op mode. Allowing four players to team up against waves of AI troopers, Co-Op was what attracted me to buy the game. Each Co-Op mission contains a little mini narrative, where you and your friends fight to complete a series of objectives.

What I really love about Co-Op mode, and what I think will appeal to people who were turned off by the original game, is how it allows everyone to play as a hero. In the original game’s big battle modes, only the top players earn enough points to take a turn as Rey, Maul, or Han Solo. In Co-Op, there are almost always enough heroes to go around, and an endless sea of targets for one to swing at. The mode can be challenging for sure, but there is considerably less pressure when you’re playing casually with your friends.

However, if your response is “I don’t have any friends” or “none of my friends have the same console as me,” then I introduce you to Instant Action mode. Instant Action is a new offline mode where you can play the game however you want to. You can pick your planet, faction, AI difficulty, the numbers of allies, enemies and heroes. If all you want from Battlefront II is to run around and zap some stormtroopers as Finn, this is the game mode for you. If you’re allergic to the phrase “online shooter”, this is the game mode for you. It’s as laid back or intense as you want it to be.

One real problem at launch was the rather bare roster of heroes; DICE has happily rectified this by adding ten new heroes. Finally, Obi-Wan and Anakin are playable along with Finn, Grievous, Tallie Lintra, BB-8, and many others. This has filled a huge hole, because having the Clone Wars era without a playable Anakin and Obi-Wan was honestly ridiculous. The detail on these characters is terrific too, with a bunch of fun and cool skins.

Even more exciting to me than the hero additions, though, is the bulking up of the elite troopers known as reinforcements. DICE has sought to raise their ranks by drawing on the wealth of Star Wars animated content. With the additions of clone commandos, ARC troopers, ISB agents, and commando droids, Battlefront has fully embraced the animated TV shows. This is one of the best parts of the game, because not only do these elites look neat, they also add depth to the gameplay. These new elite units effectively add a full tier of playable characters between heroes and troopers. If you’re a TV fan, you’re going to appreciate how lovingly DICE has rendered these characters. And even if you don’t care about those series, DICE has drawn from films new and old for reinforcements: Battlefront II has also seen the addition of Ewoks, flame troopers, rocket troopers, and my favorite, Sith troopers.

DICE’s artists have even introduced new detailed skins for their existing heroes, elites, and troopers. From the throwback costume of farmboy Luke to fan-favorites such as the ARC trooper Umbara armor, there are myriad new and iconic designs to choose from, and nearly all can be acquired through gameplay.  The new skins fully replicate the rich texture of the Star Wars universe.

With all this post-launch content, DICE has not just appealed to hardcore fans; they have made a deliberate attempt to broaden their audience. If the limited game modes didn’t appeal on launch, give Co-Op or Instant Action a shot. If you didn’t see the characters you loved originally, look again, they’ve added so many more. There is a wealth of flashy and fun new content in Battlefront II that makes it worth a second look. I never expected to love Battlefront II, but it’s become one of my favorite Star Wars games. Boot it up, and I’ll see you on Jakku.

One thought to “I Swear It’s Good Now: Why You Should Return to Battlefront II”