Star Wars is no stranger to “genre” storytelling, and John Jackson Miller’s Kenobi, coming out on August 27, is just the latest example. Originally conceived as a graphic novel, and borne from a friendly challenge to Miller to write an honest-to-goodness Star Wars western, Kenobi tells of Obi-Wan’s earliest days in exile on Tatooine, and crucially, his first interactions with the locals despite his best efforts to remain, well, safely anonymous.

While most familiar to Star Wars fans for his long-running Knights of the Old Republic comic series, Kenobi is only Miller’s second prose novel (third if you count Overdraft: The Orion Offensive, which was serialized at Amazon.com over the summer and is now available as a collection in both print and eBook formats). Recently he was gracious enough to answer a few of our questions on both Kenobi and his earlier exploits.

Eleven-ThirtyEight: Let’s start at the beginning: your first Star Wars work was a one-shot Darth Vader story in the comic series Star Wars: Empire. While I was vaguely aware that your previous work was a run on Iron Man, I’m ashamed to admit I had never put it together before now that yours was the old “Defense Secretary Tony Stark” story. Can you talk a little about the creative through line from Iron Man to Star Wars? You took some time off from comics between the two; what then prompted you to pursue Star Wars in particular? Any interesting pitches that didn’t make the cut?

John Jackson Miller: Iron Man had come about because of my work on the Crimson Dynamo series for Marvel’s Epic line in 2003, and it really was a marathon — we were biweekly for the last seven issues of the run to bring things to the point where “Avengers Disassembled” began, and it was a test of endurance. And rather than taking time off, I spent the months immediately following that redesigning Comics Buyer’s Guide from a weekly newspaper into a monthly magazine, and that was time-consuming. It was really after San Diego in 2004 that I began pitching again, which led to work on the Simpsons line and the Empire gig.

I was pleased to move to Star Wars because Iron Man had been such an intensive research project — they were marketing me as sort of a Tom-Clancy-for-comics figure, and all the military hardware and governmental rules I touched on were real. I even did my own time dilation calculations for one story, just to make sure everything was feasible. Moving to space opera was a welcome change of pace.

As for pitches that didn’t make the cut — I remember spending some time in that stretch on a Warbird series proposal (who’s more recently been known again as Ms. Marvel). That was sort of a half-step between the hard science-fiction of Iron Man and a more cosmic story; I remember I guest-starred her character in the final Iron Man issue I did, in part to get a feel for writing her. I don’t believe I ever sent that in, though — once Star Wars entered the picture, that became where my energy went.

ETE: With your having been a mainstay of Star Wars comics for a while there, I’m interested in how the level (and manner) of attention differs once one makes the jump to novels. How do Dark Horse and Del Rey compare in terms of editorial scrutiny? Knight Errant and Lost Tribe, also, were relatively low-profile stories; have you perceived a jump in fan…let’s say, engagement in the build-up to Kenobi? Or does it all blur together after this many years?

JJM: I don’t know that there’s any difference in editorial scrutiny — everyone has the same job, to make a good story that represents well for the license. Certainly the process is different, but not that much different: getting the chance to change dialogue once I see art pages is not that much different from the multiple proofreading passes we get in prose.

And they both require the same amount of work up front — though when you write a novel, a lot more of the background material that you develop anyway has a better chance to make it onto the page. People may not always see it in comics, but that work is done — and sometimes, the chance comes along to draw on it. Some of that extra KOTOR background made it into places 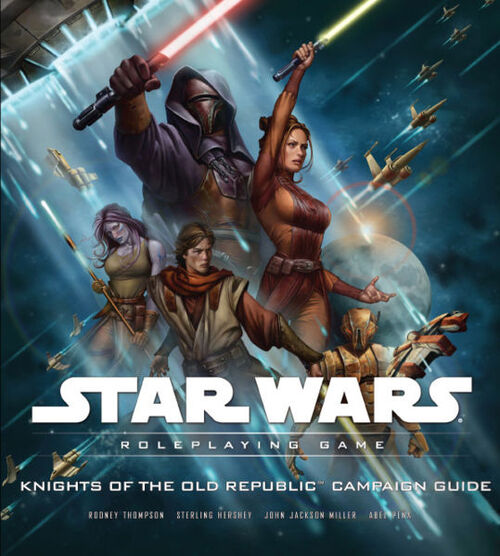 like the Campaign Guide for the role-playing game and the letter-column dispatches we ran one year in the comics.

As to the fan response, well, certainly, working with an iconic character in a self-explanatory setting and part of the timeline gives this title some broader appeal. It is a little challenging on some levels, because the average person reading, say, Lost Tribe, has likely read other Star Wars books, too — whereas Kenobi has a strong chance of being the first Star Wars novel for some people. So I had to take care with what I assumed about the audience’s knowledge. We have a “crawl” up front that reminds folks of what happened in Episode III, for example.

ETE: Moving on to Kenobi itself, the thing that most stood out to me about the book is the difference in scale compared to the average Luke/Han/Leia story—or even compared to Knight Errant. The closest analogues in recent memory, I think, are Shadow Games and Death Troopers, which like Kenobi are both distinctly “genre” stories—noir and horror, respectively. Have you perceived an increase in editorial comfort with smaller-scale stories in your time with the franchise? Do you think Star Wars publishing can survive a stronger focus on the Kenobi model, or does there need to be a mix of genre and “event” stories for the line to thrive?

JJM: I know that Kenobi — which is mostly told through the eyes of people whose lives are impacted by Obi-Wan — is a very different kind of novel for the line, but I also think it’s kind of a natural choice, because his situation and mission preclude so many other kinds of stories. He is living on the frontier. He is limited in his mobility, or at least he feels he is. He is isolated from some of the bigger events elsewhere, to a great degree. And so this kind of story really was a perfect fit, and I think the editors agreed.

As to the line itself, that’s really beyond my pay grade. But the whole point of licensed fiction is to make use of the characters, settings, and situations to tell good stories, and I don’t think that locks a publisher into a single approach to storytelling. I think there’s a market for a story about how Obi-Wan Kenobi learns to live with loss and with his new limitations, just as there’s a market for telling about rival Sith battling for power.

ETE: Given that Obi-Wan’s circumstances are so limited at this point in time—completely ignoring sales considerations, if it was up to you, would you rather write a follow-up novel sticking with Obi-Wan, or one that followed (trying to phrase this delicately) the other main characters on their own continuing adventures? Each seems like it would come with an interesting set of limitations.

JJM: Following the other main characters of this novel? I can certainly see ways where it could be done, but it would all need to connect back to Obi-Wan, since he’s the change agent that helps to put everyone on their new paths. I’d be interested in revisiting the world and these characters for certain.

ETE: Lastly, this will either be the easiest question or the hardest. Usually when I’m reading about a character whose appearance is vaguely-defined, they don’t really cohere in my mind visually–so I was surprised to find myself subconsciously casting Kenobi as if it were a movie. If word came down to you that Disney were adapting the book into a film, I’m curious who you might see playing Orrin and Annileen. I’ll keep my own opinions to myself.

JJM: Heh! Well, the first choice was pretty obvious — I was always seeing Ewan McGregor’s version in my mind’s eye — knowing that Alec Guiness needed to be in there somewhere.

As to the others, well, this isn’t so much a casting so much as who they remind me of — but for Orrin I’d imagine sort of Sam Neill in his late 40s, circa Jurassic Park: he portrays a lot of characters who have a smiling, friendly demeanor, but who are always calculating. As to Annileen, there wasn’t one specific

person I imagined — I see bits here and there, but that’s about it. I remember it wasn’t long after I created Annileen years earlier that I saw Cast Away, where Tom Hanks briefly meets a woman played by the country music singer/actress Lari White; she projected kind of the same image in that film. There are some others. Annileen works hard for a living and isn’t glamorous, but she has a matter-of-fact appeal and a lot of personal magnetism that shines through. I’ve heard a lot of suggestions lately — Ashley Judd’s getting some votes, but there are others.

And for the all-important role of Wyle Ulbreck, sadly character actor Roberts Blossom — who most remember as the cantankerous old guy in Home Alone — has passed on. But he could have done it very well!

John Jackson Miller can be found through his website Faraway Press, and he is also an active and thoughtful social media user—if you don’t have him on a friends list somewhere, you’re missing out. Thanks to him for taking the time to talk to us, and if you’re interested in more of my own thoughts on Kenobi, be sure to stop back here next Tuesday for my full review.

Oh, and just for the record—Gerald McRaney and Catherine Keener. And I love that he mentioned Jurassic Park, because my Kallie Calwell was totally Lex.

4 thoughts to “John Jackson Miller on Iron Man, Kenobi, and Matters of Scale”