Some stories make such a strongly positive impression that you wish to own them but not necessarily rush to re-read them! Classic Star Wars by Archie Goodwin and Al Williamson is one such story. As part of my general upgrade to trades over comics, I secured copies of them some years back but had not read them. I read the issues but that was 20 years ago and I’m certainly not who I was then so how does it look to me now?

Originally published as a newspaper strip from 1982 to 1984, this 3-year tale focused on the then largely vacant gap between A New Hope and The Empire Strikes Back (ESB). In this way it set the tone, perhaps unknowingly, for all subsequent bridging stories, at least up until the Clone Wars material – they wrote it knowing what they were bridging to! Dark Horse Comics decided to re-publish the strip but they wanted to publish it as a monthly comic, in colour. An extensive period of re-formatting and careful colouring followed, as colour could easily obscure the graceful linework by Williamson if done carelessly. The 20-issue series ran from 1992 to 1994, with it being collected into 3 trades in 1996.

Two decades on and I’d estimate that I’ve read around a couple of hundred Star Wars comics in that time, how can a 20-issue series, of material written in the 1980s compare to these? The answer is quite easily because quality is timeless and the one thing no would ever accuse either Goodwin or Williamson of lacking is superb creative skills! It also avoids a couple of pitfalls that older material, at least where the superheroes of Marvel and DC are concerned, regularly fall into.

First is archaic style – Chris Claremont might pull off a wordy, verbose style that jumps the decades to a degree, but that tends to be the exception. What was great decades – or even just 10 years ago – can look very different to our eyes now. This where the origins of the story work in its favour – Goodwin had perhaps 3-6 panels to tell each episode! That is a micro-narrative by any description, thus he doesn’t have any space for anything other than the story. He has to parse it down ruthlessly and he has to do this from day to day. The result is one very lean, swift-moving tale that jumps the decades with ease.

Second is the art. Al Williamson was a superb linesman, you look at his work and can so easily be lulled into thinking it is so simple. It’s just a line here or a line there isn’t it? Try imitating it and you’ll find it’s nothing of the kind – Williamson only made the difficult look easy – his Executor is one of the best you’ll ever see and that starship is murder to draw! Oh the bulk of it’s easy, but the central detail? The underside engines?

Those are obscenely detailed in the films and a comic artist has to capture all that and he does so. Even more impressive is the realism he brings to the characters while matching to the cast’s images. This perhaps doesn’t sound all that hard but Williamson’s art deftly sidesteps one of the biggest problems for a story like this, that in the desire to tell a heroic story the art slips into super-heroic mode and delivers imagery where all the characters are that bit too good-looking.

What also leaps out at me on this re-read is the sheer pace and the way it transitions from story to story. In this it is evoking the films in a very strong fashion as you have the story zipping along, flipping between characters and locations – it’s all very reminiscent of the source material it’s working with. But it goes further still. As a newspaper strip reformatted into monthly form, it is not going to fit into neat 22-page blocks which means the reader is kept off-balance the whole time! But Goodwin goes further and sometimes sets the seed of the next story within the conclusion of the current one or just throws a simple spanner in the works of characters supposed to meet at point X but don’t, so where are they are? Ah, well about that….

This would be impressive enough, but they’re working in the Star Wars universe, so what does that mean for the story? They knew they were starting at A and had to get to B and knew B equaled ESB, so what were the key questions the audience would ask after having seen that film? What they came up with was the following:

And then added in little extras like telling the story of the bounty hunter of Ord Mantell, which is a throwaway line in ESB. Plus, while this is ostensibly a tale set between the first two films, it doesn’t stop them going wider so the story also weaves Jabba’s bounty on Han, which in turn brings in Boba Fett and Dengar, Bib Fortuna gets a cameo, as does fat bastard Jabba. Finally, in a very careful move, at the finale, they even have the Emperor make a couple of very limited appearances. Goodwin’s smart enough to know a little Emperor goes a long way! It is, in every respect, a masterclass in how to use continuity to greatly enhance a story.

And they add to the mythos too with ideas like the shield-disrupting power gems, a Force-wielding mind-witch. New characters added to name but a handful are Skorr and Gribbit, who are the villains for the Ord Mantrell arc, and Admiral Griff, who makes for a smart additional adversary for the rebels. Then there’s Raskar, a pirate Solo tangles with in a bid to get the power gem he has. They are all colourful, lively creations that fit seamlessly into the bigger story. 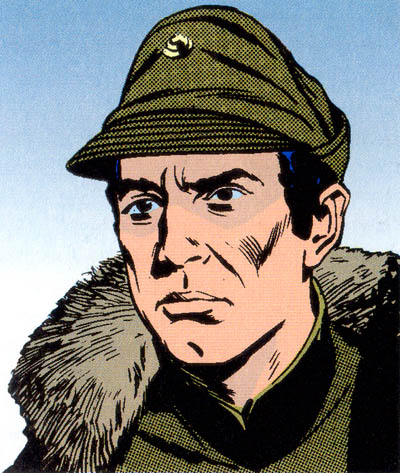 It is a very well-balanced story – everyone has a clear role, everyone is accurately chracterised – Vader’s choking Imperial fools left, right and centre, Han’s cocky, Leia’s in her quite arch ANH persona, Luke’s endearing optimistic, heroic and cares about his friends. There’s some tension on both sides, with Leia being in both Luke and Han’s sights, which in turn triggers some reckless action by Luke in volunteering for a most hazardous mission. Meanwhile on the Imperial side Vader has Admiral Griff to contend with in a very well-depicted rivalry.

I have read many more comics over the last two decades and what is best about this story is that it jumps the years effortlessly, it is every bit as good as I remember. In fact, given the direction Star Wars has taken over the last decade, it is even better than before. Perhaps more impressive is it stands up very well when compared to any other comics work within this genre or even within the medium. This should perhaps be no surprise, as it is the work of two of the best artists in the industry, who when they took this story on, had already accrued decades of experience.

It is nothing short of criminal that this story does not have the audience or the appreciation it deserves. The collections have been out of print for years and are pricey to obtain. However, digital is now an option and Dark Horse have a digital store that offers the entire series at a very competitive price, you would be looking at just under $40 for the 20 issues. This is a superb piece of work that you need in your SW collection, so go get it.