Star Wars has a strange relationship with the Dark Side of the Force. It flits from being full-on satanic influence to distilled psychopathy depending on the story, but there is one common factor – the idea that the dark side lulls the wielder in, that however constructed, it’s always a Faustian bargain at best.

Does this render the dark side power wielding nutcase that invariably results free from any kind of responsibility? Short of outright possession – which has happened – the answer has to be no. What is of interest here is that those few dark side wielding maniacs that have kicked the habit have never played the “dark side made me do it” card that fandom is fond of invoking.

I propose to look at four case studies in how the dark side operates and how the individual responded to it: Quinlan Vos, Anakin Skywalker, Kyp Durron and Cade Skywalker. Each represents a different dark side opening as it were.

Quinlan Vos’ struggle with the dark side is perhaps the most sophisticated one. For Vos the dark side operates on both an intellectual and emotional level. He had been rendered vulnerable to the dark side by amnesia but had fought off that attack. In the aftermath of the Battle of Geonosis where he saw 200 of his fellow Jedi die, Vos swore to track down the second Sith by any means necessary. If the dark side has a modus operandi it could be said to be the blank cheque. Whatever you want the dark side supplies it whenever you need it; the bill? Don’t worry about that for now. 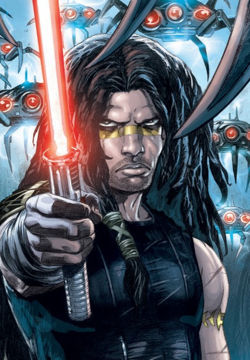 As Vos finds out, the bill for taking the any-means road is that of destroyed relationships left, right and centre. Ah but if he found the second Sith that would make it all better wouldn’t it? That would function as a perfect retroactive justification wouldn’t it? Except it wouldn’t and Vos comes to realize this, after falling for Dooku’s sophisticated ploys. Ostrander’s take on the dark side is one that tends to focus on the psychological, but recognizes there are dark places such as Korriban.

Kyp Durron is a teenager whose traumatic upbringing and experience in the spice mines of Kessel renders him easy prey for the dark side. Worse luck for him, he runs into Exar Kun, one of the dark side’s foremost advocates and practitioners! Durron is the case of outright possession, but even here the encouragement for him to step foot on the road is that of power and any means being permitted. In Durron’s case he wants to stop Admiral Daala, if that means turning against his teacher, stealing a star-killer and blowing up stars by the score so be it!

Where the line is drawn between Kun’s coerced-puppet actions and Durron’s own remains a much-debated one. Anderson’s take, one he has in common with Veitch, is no matter how inviting it may be at the start, the dark side is primarily coercive. This is based on Vader’s line in Return of the Jedi: “I must obey my master!” and could perhaps also draw from James Kahn’s notion of the Emperor driving the Imperial Forces. Just as he had that mass control over the military, so too would the Emperor have a hold on Vader, after all, that freedom of will tends to be such a messy business, better to be done with it!

If any character was going to be able to play the ‘dark side made me do it’ card, it would be Durron. Yet the short story Simple Tricks did not take him down that route, instead having the character be far more repentant. To demand perfect responsibility for people would be to require they also possess perfect knowledge of their actions’ consequences which is impossible. Therefore there does need to be some scope for mitigation, in the case of Durron, he also destroyed the technology he stole and took out a Death Star prototype, but didn’t act as if that neatly balanced the scales.

Where the spectre of mighty vengeance upon his adversaries snared Durron well and good, that trap was never going to work on Cade Skywalker. By the nature of his own experiences, Cade should have been easy prey for the dark side yet it proved not to be so. A large part of Cade’s armour against the dark side lies in his rejection of power for power’s sake or any other. Vengeance? No. Fixing the galaxy?  Hell no! To protect those close to him that others would hurt or kill? That would do it. What sets Cade apart from a good many Star Wars characters is the knowledge that he’s walking the razor’s edge, the danger for him is he could convince himself that he only deserves the dark side. 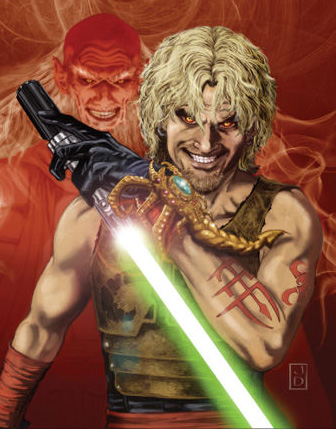 Cade’s problem is, at root, a lack of self-worth masked by bravado and a desire to owe no one.

So we come to Anakin Skywalker, who might be said to be the perfect dark side takeaway! He’s perfect! Ticks all the boxes – thinks he’s worthless, huge anger management problems, wants power to sort everything out because only violence will get the job done! And then, just to add to this highly volatile cocktail, the Jedi add a massive dose of repression! It is very important that Yoda counsels Luke on Dagobah that he must learn control, as in Luke Yoda can well see Anakin and he knows, from bitter experience, repression is not control! Unfortunately, for Anakin, neither is letting everything have free reign!

It doesn’t happen so much with Vos, though he has his moments, but for both Anakin and Durron, they go full psychopath very quickly, it’s as if once you cross into the dark side, you go from 0 to 60 on the Evil Scale in less than a second! Even allowing for broken personalities and various forms of trauma, this is more than a little odd, unless we look to another source. Unless we conclude the nature of the dark side, when all the seduction is stripped away, is that it just wants to watch the galaxy burn! It’s the kind of outlook that says: “Ok, now you’ve stolen the Ferrari, max speed! Yes, I want to watch you crash a car and seriously fuck yourself up! Now off you go!” And they do so, with gusto!

Yet does this mean they should always get a pass? Nope, that is the option of whatever trial is held, there can be mitigating circumstances like or loathe them, but even when there are, they can’t form a get-out-of-jail-free card. It would be fair to say that Drive Angry is one of those films you’ll watch when casually channel-surfing, but in its favour it does have a great supporting character in the form of The Accountant, whose speech is as good a way to bring this to a close as any (my emphasis):

Since the birth of time, humanity has endeavored to restrain evil men in prisons. But since Cain fled the murder of his brother, evil men have fled the walls of punishment. So, it doesn’t matter if you’re a bad-ass motherfucker on the run, because you think you’re better than everyone else, and somehow entitled to do what you gotta do. No. Because you see bad-ass motherfuckers are never fast enough. In the end, they will all be accounted for.

2 thoughts to ““You Don’t Know the Power of the Dark Side!” How does it work?”