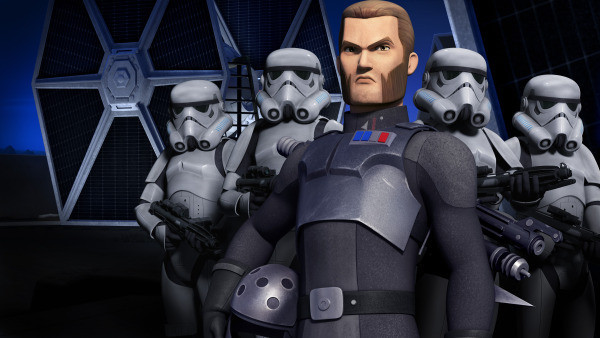 I have a copy of A New Dawn on the to-read pile and it’s giving me the evil eye: I did buy it to read it, didn’t I, so what’s taking so long? Some things should be properly appreciated, so no, I’m not going to casually barrel through it at speed. One thing I’m quite confident of is I’m going to like how the Empire is portrayed due to a couple of things: First, John Jackson Miller has an excellent track record and second, the Emperor has an efficiency adviser? That’s genius. Efficiency gurus are a modern-day Bogeyman who are more terrifying due to existing – you can’t bargain or reason them, they feel nothing, they only think in maths equations – in short, a perfect villain.

Despite this there is much trepidation around the show Rebels, particularly where the portrayal of the Empire is concerned. I was never going to be inclined to like the Clone Wars cartoon. The offense was simple but enduring: It steamrollered the 2002-2005 work done in the same era with casual contempt. Rebels, however, is not doing that. No, it has its own time period, it is not setting fire to somebody’s else’s lawn, so what’s the problem? The fear is that the Empire will be rendered as too easily defeated, too incompetent, that it will be a joke. I don’t think that needs to be feared as much as may be thought.

First, let’s look at the films – technically, across 4 years, the Empire was unable to apprehend and kill 4 rebels – 2 men, 1 woman, 1 “thing”, droids cannot be killed. This is despite one of those Rebels killing Grand Moff Tarkin by blowing up the Death Star. Yet, at the same time, after their miracle victory at Yavin, those same Rebels could do little to the Empire. Indeed the Empire found and annihilated their base, pursued them across the galaxy and built a bigger, badder Death Star. Doesn’t exactly look like a losing adversary, does it? Had those rebels been so good they would have stopped the Death Star before it blew up Alderaan too!

So let’s apply this to Rebels – whatever victories the “pitiful band” pull off, the Empire is going nowhere and the asymmetrical power relationship is not going to change either. Nor is the Empire going to run out of stormtroopers, nor is there a shortage of Star Destroyers. If the Empire really decided to give a toss and really go after this lot, they could do so by glassing every world visited! Extreme? Certainly, but remember they’re the villains and villains get to do that! (See Tarkin and Alderaan too.)

But…. Only in special circumstances. Legitimacy of authority can flow as much from restraint of power as its application. The message being: The Empire could glass worlds to get the rebel scum but that would say the Empire assigns them far more importance than they merit and the Empire is not willing to do that.

At the same time the Empire’s chief agent, the Inquisitor, cannot be too successful or the show ends. Indeed, the bulk of the heroes’ effort in Rebels will be aimed at avoiding and evading. It will likely be the Inquisitor that influences their actions, not the other way around. There may be episodes where he is not present, but he certainly will not be forgotten, instead being a brooding background menace that preys on their minds.

“But they look like idiots by having this lot escape time and again!” To whom? Who in the galaxy knows of their exploits? They have no access to media facilities, they have no PR and if they did? It would be blocked very quickly, thus no, the Empire will not look like idiots because no one will know of the escape. Witnesses you say? Dear me, you can be naïve, can’t you? Oh, you meant the viewers, well then: All that they can inflict are easily replaceable minor material losses. Nothing they do can really threaten the Empire, not even the Death Star’s destruction did that and that’s years away.

“The Inquisitor looks a fool!” Again, only if known about. And before you go any further, do you really think Darth Vader conducts performance reviews and engages in micro-management? I don’t think so, Vader has a simple management method: “This is the task, I trust you to do it by whatever means you see fit, do not fail me.” Regular reports, updates – none of this concerns Vader, he’s a success or failure man, get the one and all’s fine, get the other and you’re done. Besides which, if the Inquisitor ever really does corner them properly – they’re dead, I’m reasonably certain no one wants that.

Finally, in combination with a macro, big picture approach, there’s this: In Star Wars, characters are insanely fortuitous. Crazy million-to-one plans always work, probe droids send in thousands of reports from across the galaxy but Vader just happens to be around to hear the one from Hoth, fat bastard crime lord gets strangled and his corpse exploded. In short, it isn’t meant to be all that realistic. Which also means, in the world of Rebels, who’s going to believe all those crazy rumours about some rebels successfully escaping stormtroopers? Everyone knows that doesn’t happen. But there was TIE fighter attack used! Training flight, no one escapes both stormtroopers and TIE fighters, next you’ll tell me they got away from a Star Destroyer too!

2 thoughts to “The Empire and Rebels: Causes for Optimism”