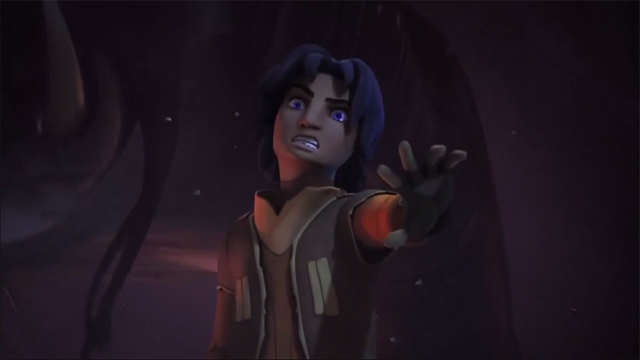 With “Gathering Forces” ended, we are at the halfway point in the season for Rebels and will be taking a break from our regular articles for the next few weeks as the show takes a holiday hiatus. In the meantime, let’s look back at what the show has done in its short time on the air to this point, what worked well and what can be improved.

Rebels has done a number of things well in its first half, but the one that stands out is characterization and character development. Ezra began the show as a loner, only out for himself, and has turned into an enthusiastic and altruistic Jedi apprentice, albeit one with secrets still coming to light, just taking his first steps into a larger world and dealing with the temptations of the dark side and the ramifications of his own bitterness and anger. Kanan started as much more “cowboy” and little “Jedi”, a practical and cynical man focused on damaging the Empire however possible, and through teaching Ezra has begun to rediscover a more mature, spiritual side buried in the years he spent living on the run. Sabine’s surface persona as a bubbly, art-obsessed teenager hides a deeper intelligence and pain, a multilingual Imperial Academy student who left the Empire to live as a rebel for reasons we have yet to see. Zeb is gruff and unfriendly, driven by his peoples’ deaths at the hands of the Empire, but also warms to his comrades and treats Ezra like a little brother or nephew. Hera is the one holding the group together, but even she has things she does not tell everyone, including the identity of their supplier and contact Fulcrum. And these examples only cover the main cast.

Where Rebels‘ biggest failing comes from so far is its portrayal of the Empire. Aside from flashes of competency, the faceless soldiers by and large have been defeated, punked and humiliated at every turn by our motley gang of heroes. Only Agent Kallus and the Inquisitor have had any measure of success, cornering and confronting the crew on several different occasions, but to this point have done no lasting damage against them, the Ghost escaping each time. The seeds have been planted for greater escalation of conflict in the future, with the Inquisitor being able to sense Kanan and Ezra’s presence even across great distances, but overall the competence of the villains has not been all that much better than the Separatists in The Clone Wars, though admittedly not used for as many jokes. While having the rank-and-file stormtroopers gun down Ezra and Zeb in the street is probably too much to ask, more displays of ability similar to the speeder bike driver who knocked Ezra out and bested Kanan in a fistfight would be welcome. Seeing Kallus or the Inquisitor from their perspective, away from the heroes, is another solution, letting them have their time in the spotlight where their opponents are not protected by narrative necessity.

Another great strength of the show is in the balance between stand-alone events and a united narrative. Of the eight episodes thus far (nine if the pilot movie counts as two), only the two at the beginning and two most recent have been directly connected, all of the others stood by themselves. But they stood as part of a larger story as well, with events being referenced and brought back often enough to make the stories feel connected without having to be directly tied together. “Gathering Forces” brought back elements and the location from “Out of Darkness”, as well furthering the conflict between Kanan and the Inquisitor first seen in “Rise of the Old Masters”. Kallus and Zeb have a mutual animosity brought on by Kallus’ role in the devastation of Zeb’s homeworld introduced in “Droids in Distress” and referenced again in “Empire Day”. The more events that are brought back up and referenced, the tighter and more controlled the show feels over its entire run, especially if it makes “filler” episodes more important.

Something to be improved on, though not necessarily a flaw, is the show’s reliance on its default character models for most episodes. The extra costs involved in creating separate character models for individual episodes is understood, and from a narrative standpoint expecting all Imperial soldiers to immediately recognize the crew on sight is not practical, but it begins to stretch suspension of disbelief when Ezra and Kanan are able to walk around downtown Capital City on Lothal, where they are known dissidents, in the same clothes they always wear without anyone recognizing until the explosives go off. A haircut, a change of clothing, even a simple disguise like a hat would make this sequence more credible. If the only ones to recognize Ezra or Kanan or any of the others in the crew are Kallus and the Inquisitor, it comes at the expense of every other soldier in the Empire, who we have already seen lacking in competence for their poor marksmanship and survival instincts. Not to mention, a more visually diverse band of heroes lends to a more visually arresting show as a whole.

Overall, Rebels’ first season, at its halfway point, is a qualified success. While the show is more mature and intelligent than most people gave it credit for before the debut, and its character work thus far is both effective and intriguing, there are still narrative flaws that necessitate a good deal of suspension of disbelief to take seriously. Much like its predecessor TCW and thematically similar shows like Avatar: The Last Airbender, Rebels needs time to set up its narrative and give recurring characters an opprotunity to return. It will definitely be a better show looking back or seen all at once rather than waiting from episode to episode, as many shows are nowadays. The first half of the season introduced the characters, showed us the setting, and gave us the stakes. The foundations have been laid, now is the time for more ambitious building to begin.