While the essay is very convincing, one can debate just how much of this detail was completely intentional on Lucas’s part—but what can’t be debated is that viewing the films through this lens as opposed to a strictly chronological one doesn’t really lend itself to the whole “expanded universe” thing. To a ring theorist, Star Wars is not unlike a clock; removing a piece would harm the entire structure, and adding extraneous bits and bobs would, too. What was Obi-Wan doing on Tatooine for nineteen years? How did Leia get her bounty hunter disguise? What happened in that nest of gundarks? None of that is relevant, and constructing explanations for them is superfluous at best, because that information isn’t in service to the clock.

And now, here we are at Episode VII: The Force Awakens. If my friend is any indication, those previous reservations about the post-Endor era no longer apply for most people, or at least can be waived if it means getting a bonafide New Movie. But there was a fair point in there—viewed as an objective fictional universe, of course other stuff could happen to Luke, Han, and Leia that would be interesting to see. But viewed as what it really is—a story—what would the new movies be about? What’s the message?

Well, for starters, we must deduce the message of the existing movies. One of the great things about Star Wars is the range of themes it speaks to, but using the ring as our guide, I believe the central point can be boiled down to one word: compassion. On a macro level, this can be seen in the explicit efforts of both the Jedi and the Sith to achieve immortality, which start with Qui-Gon in Menace and culminate in Vader’s sacrifice in Jedi. Anakin doesn’t come back as a ghost just to give the saga one extra happy ending; what the story is saying here is that we live forever only through our love for others, while those who live only for themselves will never escape their own mortality. In a way, the whole saga is like an elaborate retelling of A Christmas Carol, with Anakin as Ebenezer Scrooge; a good man is hardened by the world around him, turns inward for a time, and thanks to outside interference is ultimately reconnected with his younger, better self.

That story is indeed over. But the catalyst for Anakin’s rebirth is still around—and in all likelihood will be a major fulcrum of Awakens‘ story. When Luke Skywalker throws his lightsaber aside and refuses to kill his father, that’s not just Luke’s crowning moment—that’s the point. Only this expression of ultimate compassion has the power to bring Anakin back to himself, and the fact that the apotheosis of a series with “Wars” in the title is the two main characters throwing their own lives away out of love for each other cannot be overstated.

Star Wars isn’t about war, it’s about selflessness in a selfish universe. I bought into the Expanded Universe as much as anybody, but its mentality of “yeah, then what happened?” often lost sight of this, and I don’t think it’s a coincidence that the incessant need to keep restaging these sort of “ultimate showdown” moments eventually whittled the Galaxy Far, Far Away into a hard, bleak place with a government and a Jedi Order barely holding themselves together. 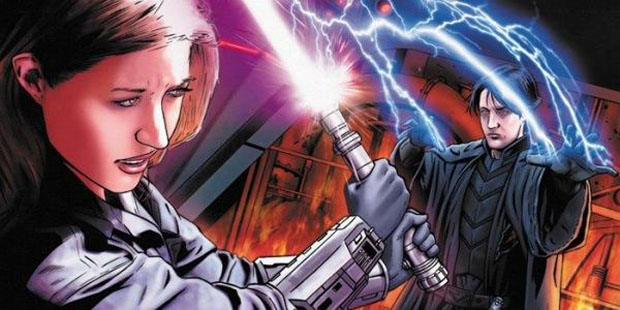 There was a way for the “Big Three” EU to tell stories in a more measured form that didn’t retroactively impinge upon the films’ message, but the desire to stay relevant in a dwindling marketplace, amid scores of other novels, eventually led to roughly a decade of one-upmanship in the form of the New Jedi Order, Legacy of the Force, and Fate of the Jedi series (at the same time that much of the best EU ever was coming out in the form of standalone one-to-three-book stories). Each of these series had its merits and shortcomings, but all three of them coming in rapid succession was a lot for the GFFA, and readers, to take, and that the hits have finally stopped coming is perhaps the biggest saving grace of the continuity reboot.

But if the novels of the Big Three’s successor generation were overcome by pressure to live up to the films’ importance, the sequel trilogy will undoubtedly feel all that and more. I have no doubt that Finn, Rey, and Poe are in for a hell of a time, and that like Obi-Wan and Anakin before them, not all of the Big Three will survive to the end of this trilogy. That’s fine, but if the sequels are to truly be of a piece with Episodes I-VI, they can’t settle for “then what happened?” They need to carry forward Luke’s lesson of compassion and love in the face of annihilation, because igniting a lightsaber is not Star Wars to me. Throwing it away is.

2 thoughts to “Everything Disney Needs to Know, It Can Learn from Luke Skywalker”