One of the defining things about old Star Wars content is the sheer number of places we go, the environments, the unique planets. The Legends-verse gives us a variety of excellent inspirations for Episode VII-and-beyond settings, and we’ve seen a possibly familiar place already in the teaser. The story of Star Wars might be set in space, but it very much has more elements of fantasy and space-opera rather than a straight science fiction tale. Abandoned temples, jungles, deserts, crime lords’ palaces, and bustling cities all bring life to an expansive universe, making it feel lived-in. A space-based world that keeps in mind the places that aren’t space makes the story come more to life. These settings are just as important as the characters and plot, and we can’t really imagine the world of Star Wars without the settings around us.

The galaxy is a huge place. We don’t know what the map of the galaxy looks like any longer, but when we did, it always had new corners to explore. Even heavily-populated areas like the Deep Core still held secrets, and an entire region called the “Unknown Regions” speaks volumes about just how little we know about the galaxy. The Republic, and then the Empire, and then the New Republic and its various successors, may have controlled much of the galaxy, but remembering how extensive the galaxy is reinforces just how much control they don’t have. Yes, it’s odd that the Empire keeps finding new places to hide in throughout the galaxy; yes, it’s strange that Sith temples and lost Jedi and new alien species turn up. But it works. In a setting as large as a galaxy, the infinite possibilities are what keep it moving.

For all that the unusual places of the GFFA are wonderful, we need the mundane locations. What would a galaxy be without a diner, a crummy shuttle traveling across the galaxy, a cantina? The world isn’t just about the extraordinary, and making every part of it special is a challenge. We don’t think often about the places we go to in our daily lives- the coffee shop, gas station, grocery store- but they’re such an important part of the worldbuilding. These little details become the flavor text for Star Wars eventually; we can’t imagine a city planet like Coruscant without the little shops, restaurants, theaters and other places that aren’t the government buildings. Star Wars might be a tale of Jedi and Sith and the great powers that shape the galaxy, but we can’t forget the little people, too. There are so many ordinary people out there, and they are an important part of the world. It will be important for the sequel trilogy to remember those who aren’t the heroes. What are the ordinary people doing? Who else is out there, especially those who aid our heroes? Where are they from? Mos Espa is just as important to Anakin Skywalker’s story as is the Jedi Temple. 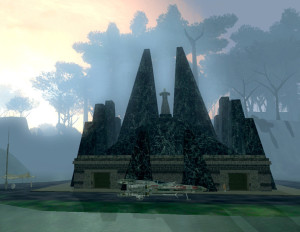 The various Sith settings are among the most interesting manifestations of evil. They are all dark and ominous places, scattered among hidden planets. Many of these places have appeared again and again, their evil pasts brought back to life with each new curious potential Sith disciple. The Sith worlds are often wild and savage, full of monsters and dangerous animals. Sith alchemy makes the local wildlife all the more unusual, and the temples we see are dark and foreboding. Best of all, the Sith habit of leaving a debris trail across the galaxy leaves us endless opportunities to accidentally find more Sith artifacts and temples. Their aesthetic is more standardized in later Legends, and perhaps some of that will find its way into future works. We can’t pass up a good villain, especially not a good villain who can come with a very fitting environment.

In contrast, Jedi settings emphasize control and life, things missing from Sith philosophy and architecture. The Jedi Temple on Coruscant is altogether precisely constructed, using so many sharp lines and carefully-thought-out designs. The adjunct temple we see on Lothal grows out of the ground, and can only be fully lifted from the ground with the Force. On the inside, it is full of organic passages and stonework that looks more like something formed naturally than anything shaped by Jedi. The academy on Yavin IV fully embraces its intertwinement with the jungle and the presence of the life around it, and has made full use of the long-abandoned Massassi temples. For that matter, turning such a Sith place into a Jedi place is a powerful statement of their differing views on the universe itself. The temples, though constructed to be ominous and overbearing over a jungle that just keeps living, have now been made to exist smoothly with the world around them. Yavin IV going from Sith territory to Rebellion- and 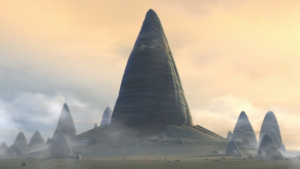 later Jedi-held territory comes with the temples becoming more a part of the landscape, blending into the world around them and collaborating with it in a way the Sith could not have imagined. Will our new Jedi have returned to the look of the old Jedi order? Or will they have embraced a new style?

The center of the galaxy itself goes through several incarnations. Coruscant, or Imperial Center, gets a new name and identity from Empire and New Republic, and again with the arrival of the Yuuzhan Vong. As the capital world of the galaxy, there is a great psychological prominence in attacking Coruscant itself in the many wars we see. The Separatist armies that attack Coruscant and kidnap Palpatine are described as striking fear into the hearts of many citizens- specifically because Coruscant isn’t just the capital of the galaxy. It is a refuge of sorts; though it is far from the safest or most tranquil planet, it is the world that represents law and order and government above and beyond all others. For any regime to legitimize their rule, they must capture Coruscant. Every time it changes hands, it goes through a transformation. Maybe now, we’ll get to see on-screen another view of Coruscant under a new ruler, and reinforce the psychological value of the galaxy’s capital as well as its endless variety of places.

One of the unusual things about the planets we encounter is the uniformity of the environments. Coruscant, Dagobah, Lothal, Hoth- are all big enough planets that it’s a surprise that they don’t have more than one climate (or at least, not more than one climate that we see). While I was watching the Force Awakens trailer, I wondered “what if all the environments we see are on the same planet. Or what if that desert planet isn’t Tatooine. Or what if that snowy forest is Hoth.” Embracing the wide variety of planets will make for all the more interesting places for future Star Wars works to explore.

It’s been a clear trend in new Star Wars material that the Legends-verse is a goldmine of ideas, and we can fully expect that a good deal of the planets we know will show up again. Regardless of which planet we are on, there are a variety of places to explore on that world. We see richly populated places, more species than we can name, places that perfectly fit where in the galaxy we are. We are surrounded by so many species in the galaxy, so many different aesthetics, and yet we only see a few of them represented. Let’s enjoy the vast array of scenery in Star Wars, and hope for even more new environments in the future.