The ideas of parallelism and the end of a story referring back to a way it began are, of course, hardly new or innovative concepts. Many great books, films and other forms of media close much the way they open, be it visually, thematically or even straight-up repeating themselves. A few weeks ago, I was make aware of a superb (and lengthy) article/essay that speculated on the circular storytelling model that united the Star Wars film saga into one united narrative. Whether you agree that such a pattern was George Lucas’s intention or not, the idea of parallelism is riddled through the Star Wars universe, a franchise where references to past material is expected far more than a wholly original concept.

When Kanan was captured, it meant that the Ghost crew had a decision to make: leave Kanan in the hands of the Empire, laying low somewhere until the pressure brought on by Grand Moff Tarkin blows over; or come up with some way to track him to where they are holding him and stage a daring Death Star-style rescue. It was a test of loyalty for the entire crew—loyalty to Kanan measured against loyalty to their mission; loyalty to their crew measured against loyalty to the greater good of Lothal, the sector, even the galaxy as a whole.

Of course, our merry band of dissidents by and large fail the test of mind in favor of the test of heart. They want to help Kanan, their comrade, teacher and friend, and will do so through whatever obstacles are put in their path. Even Chopper doggedly plugs away at a dead connection to the Imperial network in a vain attempt to do something, anything, to help bring him back. But the one to lead the charge and defy orders, going to extreme lengths to find where he was taken, is not Hera, as one might assume. Despite their shared years of experience, she knows that the mission is bigger than one man. She knows that what they have put together cannot be risked to try and save a man who already gave himself up for lost. 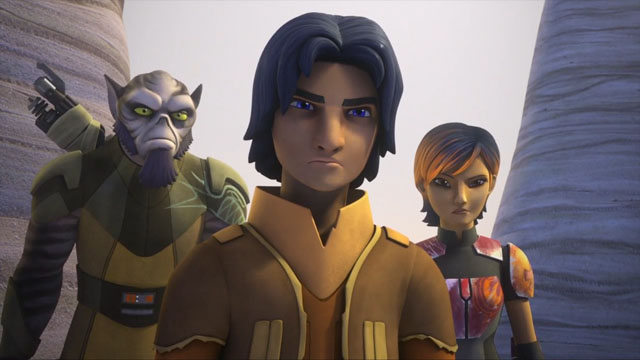 Ezra, on the other hand, remembers the first time he met the crew of the Ghost. He remembers the insane lengths they went to in order to rescue him from Kallus’s clutches, up to and including a direct assault on an Imperial Star Destroyer. He remembers his own certainty that he would be left behind to rot, and the joyous surprise when they not only rescued him but brought him back aboard as a member of the crew. And he remembers how Kanan, perhaps the one least willing to bring him aboard, took him under his wing and opened his eyes to a much larger world than Ezra had ever imagined.

It’s no wonder then that Ezra is the one so determined to rescue his mentor. After all, they have done the impossible before, fortune favors the bold. Sabine and Zeb are there with him, despite Hera’s misgivings, and even she is turned to their cause when the first glimmer of hope at a successful rescue comes back to her. Whether the cost for that rescue is too steep, or worth what was paid at all, will be an interested thread to follow in the next season. But few among the crew themselves are thinking long-term. They are only thinking of how to get to Mustafar, and how to save Kanan.

Rebel‘s first season opened with a daring rescue to snatch someone from the iron grip of the Empire, and it will end in much the same way. (At least it will if Ezra has anything to say about it.) The rescue attempts may not play out the same way. One succeeded marvelously, the other may fail spectacularly. They certainly are not played up as being similar circumstances within the show’s internal narrative, at least not yet. But the parallelism is undeniable. And to the credit of the show’s writing staff, it is also subtle enough that only a lengthy sidelong glance may bring it up. Whether success or failure, a Pyrrhic victory or a success in defeat, we all wait with baited breath to see what the outcome will be, next week.