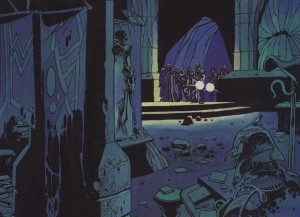 What do we accept as canon, how do we perceive canon, why does it matter? It matters because there are things we aren’t willing to give up. Those don’t have to be large elements; it may be something small, concepts, ideas, whatever it is that really makes Star Wars what it is. Our relationship as fans with the Star Wars canon has varied over the years, and now that we definitely know what is and isn’t canon, that doesn’t necessarily make it easier for us to feel at peace with it. It feels like we’re living in a blended universe nowadays, where there is a possibility of many things becoming canon even if little is set in stone.

One of the best terms I’ve heard lately is “shadow canon.” There are plenty of ideas in Star Wars that haven’t been formally canonized, plenty of events not mentioned, but the references to them are plain. Clearly, there are some things that may have survived the great Legends announcement mostly intact, but may never be mentioned as such. Simply put, there are enough good ideas from Legends that it’s worth it to allow some things to make their way into canon, even if a bit indirectly. It brings a sense of unity and allows for the selection of the best elements of older canon. You can’t do a complete reboot without maintaining some of the original features of the story, and the small things being brought into new canon help Star Wars feel less empty.

So much of canon, to me, has to do with the tone and feel of a story. There are some books- for example, much of the Fate of the Jedi series- that just don’t seem to mesh as well with the rest of the Star Wars universe. One of the things that convinced me that the new reboot wasn’t a bad thing was the very feel of A New Dawn, how much it reminded me of the old Thrawn trilogy in just its tone and style. Keeping a story feeling like Star Wars has a lot to do with making it fit into the larger continuity. For books and series that just don’t feel as right, or don’t seem to work well with everything else, it’s just hard to see them as actual canon. How many of us took a break from Star Wars publishing due to just one book that didn’t quite work? And then a book comes out whose tone meshes perfectly with what is often considered the best of Star Wars publishing. It brought me back and gave me hope for the future books, which has been reasonably well-placed. Canon isn’t just about the little pieces, but also about the bigger picture.

I mentioned earlier feeling at peace with canon, or the lack thereof. It’s hard to accept some things being canon when they just don’t seem to work, or don’t seem to fit the universe. Furthermore, we as fans have wildly different ideas about what does and doesn’t fit in the canon. Part of the problem I’m having now with what is and isn’t canon is the focus on one small section of the universe, on characters who seem to have the potential for too much influence over future events. This smacks of something that could turn into retconning or otherwise modifying storylines set in the OT. Why couldn’t we have gotten new canon in another era, such as the Old Republic era that had had such great storytelling recently? The gaps in canon are often a difficult thing for those of us who are used to having so much of the timeline filled in. 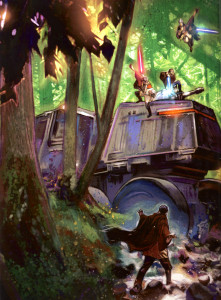 New canon is going to have the same situation that old canon had: varying quality. This is not necessarily a problem; not everything will be to everyone’s taste. One of the great things about the Star Wars universe is simply how vast it is and how possible it is to have varying quality of material and it not be a bad thing. There is a nostalgia lens we have to account for; many of us who were introduced to the EU through books now widely negatively regarded still have a fondness for those books. Plenty of Star Wars fans I talk to abhor the Jedi Academy trilogy; being that my first experience with the EU was Jedi Search, that trilogy will always have a soft spot in my heart. How will we see the newest canon in a year, five years, ten years? Will we be dismissing much of it as the TV Trope Early Installment Weirdness, or will it hold up to time? All of the little references to older EU are an important bridge, bringing us into new canon and helping us believe that we’re still in the same universe.

The selection of what ended up canon was both completely unsurprising and more difficult to accept than I expected. Trying to explain forty years of in-universe history was an ongoing challenge every time I tried to tell someone about what I was reading. By the time of the Great Reboot, I was already participating somewhat in selective canon in my own reading; though some of the stories were interesting and fun, I just had a hard time seeing them in the context of the larger Star Wars universe. This probably isn’t uncommon; within every large fandom, there are corners for everyone and not everything necessarily has to work.

The case for selective canon is simple. We all have different tastes and different favorite eras. Many of the gaps in the timeline will be filled in, while some of the new content will likely end up more infamous than renowned. Learning to pick and choose as to what we as fans like the most is an important skill; though completionism is something many of us are prone to, it’s not necessary. We can choose to only follow the plot threads we are most interested in, something that I came to love about the old EU. As fans, choosing what we want to follow is going to keep us invested in the fandom, and I for one am eagerly awaiting Aftermath and the return of post-ROTJ publishing. We’ll bring more fans back into Star Wars, the more wide-ranging it gets, and we will all continue to choose what we want to accept as canon. Hopefully things will be clear and unified enough that we won’t feel the need to pick and choose as much.

5 thoughts to “Pick and Choose: Not Always Liking Canon”