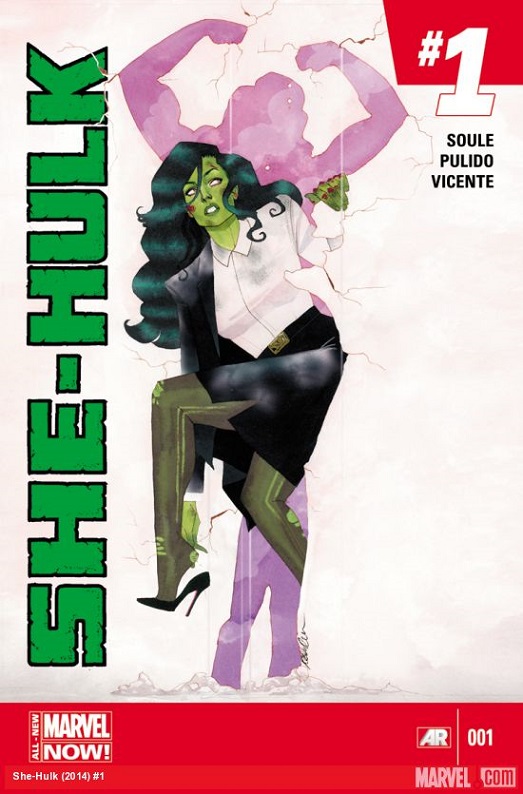 In David Schwarz’s series Meet the Marvels, he’s been spotlighting the previous work of Marvel’s current slate of Star Wars writers, including Star Wars‘s Jason Aaron, Darth Vader‘s Kieron Gillen, and most recently, Princess Leia‘s Mark Waid (since he hadn’t written comics previously, Greg Weisman was skipped—but if you’d like to read more about his work pre-Kanan and Star Wars Rebels, Ben Wahrman has you covered). That brings us up to Charles Soule, who was announced around Celebration Anaheim as writing a Lando miniseries to follow Waid’s Leia. Though he’s certainly made a name for himself in recent years with prominent work like The Death of Wolverine, Soule’s bibliography isn’t quite as extensive as a Gillen or an Aaron, so David was gracious enough to hand this one off to me—so that I might extol the virtues of Soule’s awesome relaunch of She-Hulk last year.

She-Hulk is an interesting character; on the one hand, she’s the absolute embodiment of the ancient comics trope of taking a popular male hero and sloppily stapling on a uterus rather than creating a totally original female character (and not only was she unoriginal, but She-Hulk was also a staple of the sleazy “Swimsuit Special” era of comics). On the other hand, Jennifer Walters (as it says on her birth certificate) has proven remarkably adept at representing all sorts of progressive, empowering messages. She’s funny: even at their tackiest, She-Hulk comics have always had a wry just-this-side-of-Deadpool element of metahumor to them that gives the character a certain snarky agency lost to more “serious” characters. She’s also pretty much always in control of her abilities: She-Hulk is Jennifer Walters, there’s no Jekyll/Hyde melodrama in her life whatsoever, and Soule’s series in particular depicted her in Hulk form literally all the time. She’s not stunted by or ashamed of her powers, they’re simply who she is—which puts her miles ahead of Bruce Banner. And lastly, did I mention she’s a goddamn lawyer? 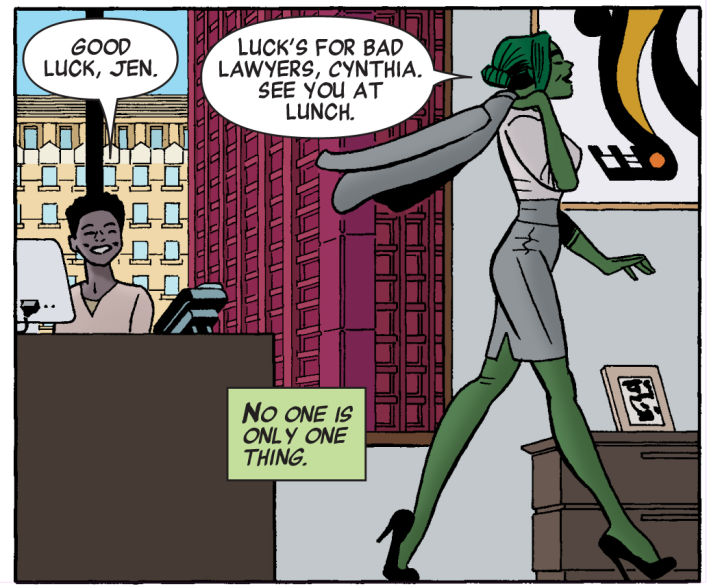 That last part is likely a big reason Soule, a practicing attorney himself, was given the job of relaunching She-Hulk—and it shows. The series begins with Shulkie leaving her firm and going into business for herself, and the assorted plots and subplots of the twelve-issue run (which I’m gonna go ahead and blame on Secret Wars) are always driven by her caseload in a way that, for me at least, feels plausibly lawyer-y. While always finding room for action, Soule utilizes real legal scenarios, like Dr. Doom’s heir apparent Kristoff applying for asylum in the United States, or the legality of a deathbed confession against Captain America in a wrongful death suit (I can’t pretend to follow it completely, but real attorneys seem to dig it).

Another great thing about the run is the secondary cast—Soule picks out lots of third-string Marvel characters for roles, but gives the biggest part to rebel-without-a-cause Patsy Walker, known as Hellcat, who comes on board as She-Hulk’s field investigator. In Soule’s words, “I thought Jen needed a foil, and Jen has primarily been portrayed as a party gal (…) And the current version of Patsy Walker is kind of screwed up. She’s going through some stuff. So it puts Jen in a role that she’s not totally comfortable with, which is sort of a mentor role.” In addition to Walker, She-Hulk’s secretary and paralegal is a new character named Angie Huang—as a gruff, stunningly competent older woman of color, Angie isn’t the kind of character you see in mainstream comics a lot, but who I can say from experience is a very realistic legal functionary. And as you learn more about her, it becomes clear that she’s got her own shades of Marvel-style fantasy as well.

So what does all this have to do with a comic about Lando? Well, superficially, not a hell of a lot. Lando is a scoundrel, after all, and if She-Hulk is about using the law to your advantage, Lando is just the opposite. What he and Jennifer do have in common, though, is their play-by-your-own-rules attitude. A cunning, well-researched legal strategy and a heist aren’t all that different at the end of the day, and Soule has more than proven his ability to craft the former in a way that’s grounded in believability while utilizing the best parts of a fantastical setting.

He’s also demonstrated an ability to go out of his way to create a well-rounded cast of women entirely of his own volition—a character as idiosyncratic as Angie Huang isn’t exactly brought to life by market forces. And while Hellcat may not quite be a role model, Soule found a role for her in his story that made sense and made a positive impression on both her and Jennifer. Lando’s secondary characters, meanwhile, have often been limited to the “femme fatale” trope, but if there’s anyone who can think outside the box there, it’s Soule. If She-Hulk was in need of a foil, Lando Calrissian is absolutely in need of one, and I’m excited to see what kind of hell Charles Soule cooks up for him.

One thought to “Meet the Marvels: Charles Soule”