A momentous decision has been made. At long last, the Jedi Council Forums allow same-sex pairings in fanfiction. Yes, you may say, that was mostly allowed for a while. It just had to be original characters only, and the most permitted was vague references. And now, we’re allowed to write same-sex pairings, and canon characters are included. Basically, the most controversial rule of the JC Forums has been repealed, and let’s just say Twitter went wild with the news. The responses have been overwhelmingly positive, and I for one am quite excited.

One of the most prominent places on the internet for Star Wars fandom was honestly not very friendly to LGBT fans. A rule that explicitly says that “the relationships you want to have are not ‘family-friendly’ enough for our site” is inherently discriminatory. However, it was the rule. We were told “it was handed down from the powers that be on this site.” There really was no way to get around it or discuss it. The old fanfic guidelines had examples of the maximum amount of sex and violence allowable, and honestly? If you’re going to allow that level of violence, two same-sex people holding hands is definitely nowhere near as scandalous. But apparently it was. It felt hypocritical and exclusionary.

I signed up on TheForce.Net in 2005 and quickly ended up on the Fanfic boards. Yes, it was nice and all, but when I read the rules, I discovered something interesting. This site, which seemed to be the largest place on the internet for Star Wars fic, didn’t allow same-sex pairings. The rest of the rules made sense, but from my experience of fandom, it seemed odd. And as I got older, I realized that what this meant was that I wasn’t going to see characters from my favorite fandom in the sort of relationships that I wanted to have. It frankly wasn’t a very welcoming environment at that time. Especially after reading Sacrifice, and being overjoyed and a bit shocked to see the phrase “his husband,” I knew there was something not quite right about that rule. It wasn’t just that there was a discriminatory rule in place. It was also that no one really stirred up that much trouble over it, and every time rule revisions were brought up, we never really got to discuss same-sex pairings. It just 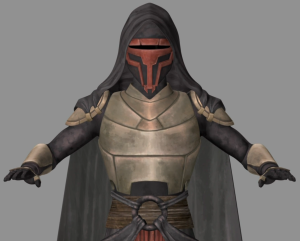 wasn’t really up for debate. Canonically queer characters made it all the more controversial; realizing that this rule meant that we couldn’t really write about Beviin and Vasur in the relationship they were canonically in was confusing, and how many of us had a female Revan who ultimately ended up interested in Juhani? Contradictory, indeed.

I walked away from Star Wars fandom for a while. Part of it was other fandoms taking over, and a big part was feeling like I had no place in my favorite fandom. I ran into other former TF.N fanfic writers, many of whom told me that they’d also left because they felt unwelcome, or that in all good conscience, they couldn’t be on a site that didn’t want to see same-sex pairings. There’s a basic lesson: discriminatory rules do push people away. There are other sites now- AO3 and tumblr both get a lot of fanfic, but it wasn’t the same community. I dropped out of fanfic and Star Wars for a while, and when I came back, it was with a stronger eye on diversity.

It’s 2015. Think for a minute. It’s kriffing 2015. And at last, we can write what we want. Please remember that it took until 2015 to get there. That, in and of itself, is ridiculous. The no-slash rule was controversial when I first signed up in 2005, discussed and debated many times, and every time I heard rumors it might be revised, I just laughed. I hate to be cynical, but we all know that progress is often slow. However, as the cultural attitudes about same-sex relationships shifted, the push was on. We see slash in pretty much every fandom. It’s not unusual or horrifying or anything like that; it’s perfectly normal, and indeed a great many fanficcers read and/or write slash. For better or worse, slash is what many of us think of when we first think about fanfic, and just based on society’s attitudes, same-sex pairings in media are… normal. Cultural attitudes about same-sex relationships have dramatically changed, and it only makes sense that our media has changed to accommodate that. Therefore, waiting for a prominent site in a prominent fandom to change their rules was quite a long wait.

It ties firmly into the larger diversity discussion: representation matters. All of us deserve to see ourselves in fiction, and for many of us, fanfic was the way we handled canon that didn’t always live up to our expectations. Writing same-sex pairings into fanfic was important to me as a way to see different types of relationships represented. Diversity for its own sake is important- the world isn’t just straight white men, and that should also be true for our fiction. One of the questions that came from Disney’s takeover of Star Wars was whether they’d be able to bring more diversity to the franchise, and so far, they are. They’ve even included a canonically gay character and been open about it. Just based on this clear endorsement of diversity, it wouldn’t make sense for the largest Star Wars fansite to continue to not really allow same-sex relationships.

Right now, I’m willing to return to fanfic and TF.N; the response across the internet has been overwhelmingly positive, even if it was bit skeptical at first. It almost feels like a welcome home for all of us who wanted to be more involved with the still-largest and most prominent Star Wars fansite, but felt pushed away. I might just be ready to start writing fanfic again myself. Thank you, TheForce.Net, for finally doing the right thing and including all Star Wars fans. We’ve been hearing from the creators that Star Wars is for everyone. Thank you for following along with that.