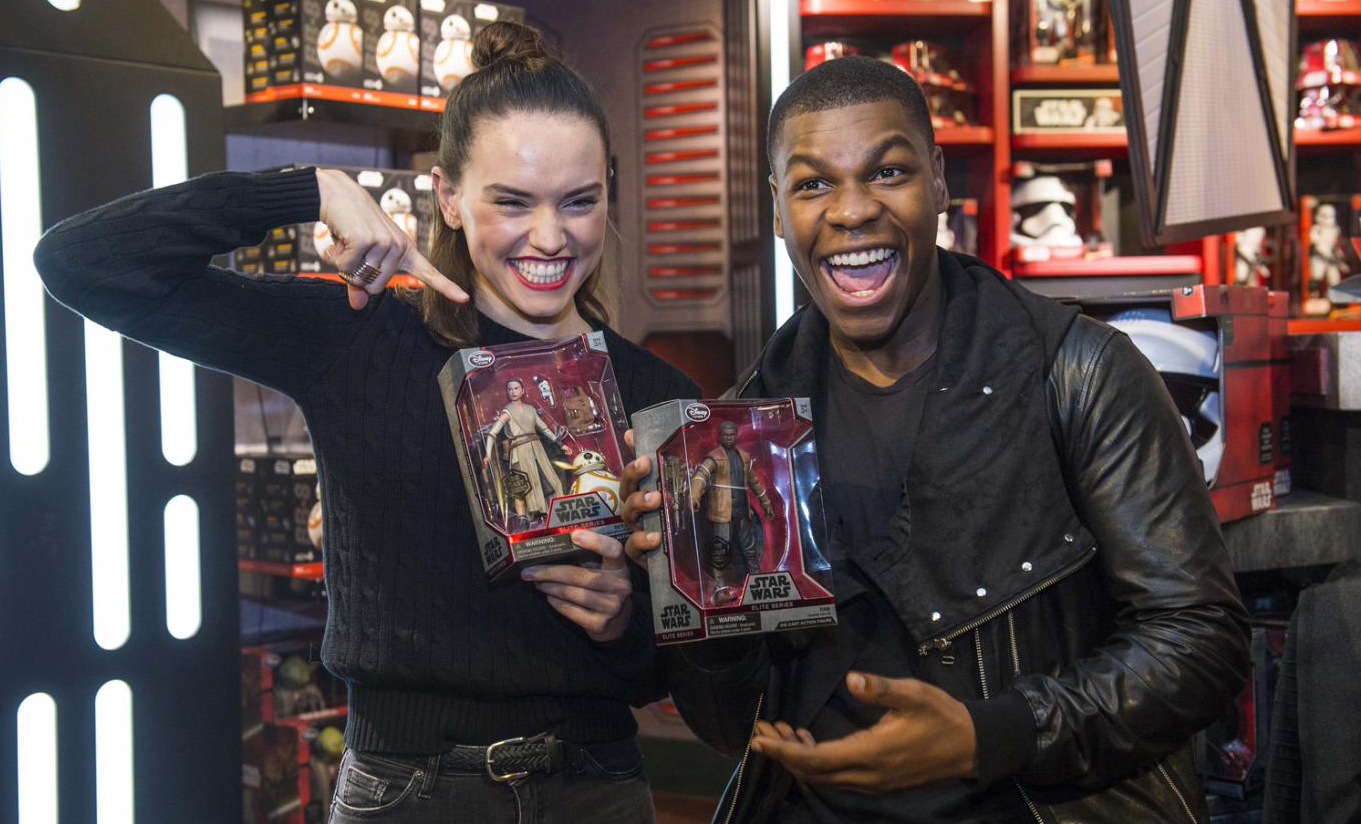 Compounding this is the fact that Star Wars has not exactly had the best track record regarding gender representation in toys. The initial wave of 3.75” figures for Star Wars Rebels managed to leave out Sabine and Hera, the two main female characters. In fact, Hera appears on barely any merchandise, thus sparking the Twitter hashtag #WheresHera to bring attention to the gender imbalance. And earlier this year, at the New York Toy Fair, a Hasbro representative made what many fans considered to be a very flippant comment about the lack of female figures, which led to another round of fan outrage.

All in all, many fans were cynical about the toy marketing plan for The Force Awakens. Many were dismally predicting another round of Avengers nonsense where Rey would be shunted to the side in favor of her male co-leads and we’d be hard pressed to find items featuring her. We’d probably get a bit luckier with Phasma, since she wears a helmet and isn’t easily distinguishable as a girl, but she’d not get nearly as much exposure as the other (male) villains. Finally, the majority of the non-toy items would be targeted towards men and boys, with maybe a shirt or two for the girls if we were lucky.

The more optimistic fans among us often point out that Kathleen Kennedy and Lucasfilm have been making big pushes when it came to diversifying the Star Wars franchise. In fact, all things considered, Star Wars has been doing pretty great on the diversity front (in multiple areas, not just with regards to gender) and many hoped this would carry over to the merchandise for The Force Awakens. However, at the end of the day licensing is a business decision and has little to do with creative decisions. It’s difficult to know just how much control the top brass at Lucasfilm has over merchandising decisions like this. It’s difficult to know who exactly is making these business calls and marginalizing (intentionally or not) female characters and female fans.

And then…Force Friday hit. And it turns out that all our doomsday predictions were (fortunately) for naught.

Leaked pictures of toys had been slowly appearing on the internet in the days leading up to Force Friday, so most fans had a fairly good idea of what sort of items they would be able to find on September 4th. And it was overwhelmingly positive. Rey and Phasma were just as represented on toys as their male co-leads. Rey on her speeder was everywhere. In fact, both women were often placed front and center in group shots. Even Leia rarely, if ever, gets that distinction.

Most importantly, the figures are selling. I made trips to all my local stores (three Targets, two Disney Stores, a Toys ‘R’ Us and a Walmart), kept tabs on their respective sites, and crowdsourced info from Twitter. Though all the figures are popular, you might still be able to find a Poe, Finn, or the occasional Kylo. Rey, however, is scarce and Phasma is nigh impossible to find. A common argument against female figures and toys is that “they’re for boys and boys don’t want to play with girl figures.” Leaving aside the fact that roughly half of Star Wars fans are girls, it’s clear that these characters are popular and can’t stay on the shelf. If a character is cool enough (and Phasma’s chrome armor definitely qualifies as cool), kids will want it.

I was one of the many fans at Target at midnight to get first dibs on The Force Awakens merchandise, because I’m an obsessive fan who clearly doesn’t value things like sleep. One of the first things I noticed was that the store had several items of TFA-related clothing – for all genders and all ages. For the longest time, licensed geek apparel for women and girls had been relegated to specialty retailers like Her Universe. You might occasionally find something in the women’s section of a place like Target or Walmart but never anything for little girls; the vast majority of apparel was targeted towards men and boys. But even that seems to be changing. As mentioned, Target has begun adding more Star Wars apparel for women and girls, but even large department stores like Macy’s, JCPenney, and Kohl’s are getting in on it. 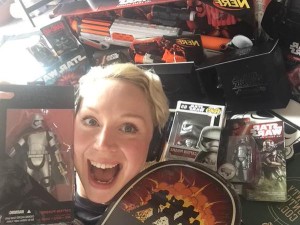 In fact, it seems that practically overnight many mass retailers have quietly started doing away with gendered marketing. In early August, Target began doing away with gender-based signs in many of its kids sections. The Disney Store is choosing to list its Halloween costumes as being “for kids” and not “for girls” or “for boys.” Walmart released a series of commercials promoting their Star Wars line that range from quietly normalizing the idea that “girls like Star Wars too” to outright shouting it in your face. Most strikingly, Hasbro Star Wars design director Steve Evans has specifically commented on the changing market and the push to embrace girls into the brand more.

It’s hard to believe that this is the same franchise that only a short while ago didn’t see the need for more female figures or Leia products and who had fans assuming the worst when a potential Leia figure was delayed due to production issues. It’s almost a complete 180 and it finally feels like Hasbro et al. have heard the outcry from fans and are taking serious steps to address those concerns. Will this last? It’s hard to know right now, since this is just the first wave of merchandise for The Force Awakens. And things certainly aren’t perfect; poor Hera is still missing from the lineup of Star Wars Rebels Disney Infinity figures, and rereleases of prequel and original trilogy figures are scarce on Leia and Padmé. And Star Wars is only one license after all. Only time will tell whether this shift in marketing will extend to other media properties.

But it’s a start. It’s a first step into a larger world and hopefully a serious move towards inclusion of ALL fans.

3 thoughts to “Force Friday Flashback: A New Kind of Marketing”