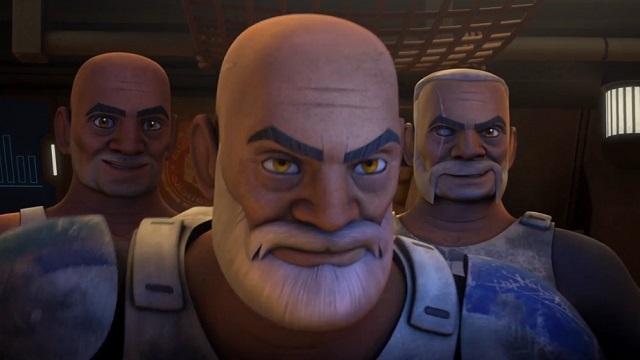 How often does a franchise allow its characters to grow old, to mature, or even to have their characters legitimately become damaged, irreparably changed? Character development isn’t always a positive thing, necessarily. Sometimes, something develops that isn’t positive at all, and that takes a certain level of determination and daring to do. The characters that the audience loves might suddenly become the ones that they hate, or pity.

When Star Wars Rebels started ramping up promotions for the beginning of the second season, they let us know that there would be returning characters from The Clone Wars appearing, namely, three of the clones themselves. Before any footage came out, it was easy to assume that the years had been relatively kind to the trio. Wolffe, Gregor and Rex looked older, grayer, a bit heftier, but not too much worse for wear for coming through as much conflict as they did.

Of course, once footage came out and once the episodes themselves had aired, appearances turned out to be deceiving.

Gregor, who suffered from amnesia in his initial appearance, had apparently suffered some degree of brain damage either in the explosion that had seemingly killed him, or some time thereafter. He still has his inbred ability and the skills driven into him by his training, but his rational mind is a babbling, bubbly mess. The implication that such a mentally disturbed man had, at some point, returned to service under the Empire is almost as disturbing as the idea that he is conscious of his condition and doesn’t really care.

Wolffe on the other hand seems to have been more damaged by the intervening time between the end of the war and the present as we see him in “Relics of the Old Republic”. He’s been reduced to an instinctual being barely capable of higher thought functions, snarling at intruders to his home and defending it from any potential threats he perceives. Then, once he’s rebuked, he backs down, metaphorical ears flat and tail between his legs. The howls he lets loose as they ride into battle once again are, like Gregor’s enthusiastic cackling, evidence of deep psychological disturbance. 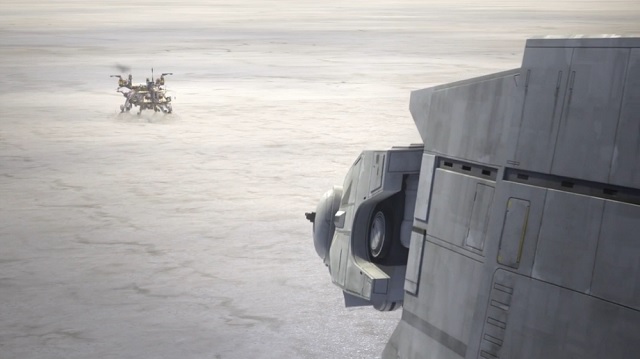 Out of the three, Rex is the one who has remained intact, likely because he has rooted himself on taking care of his brothers. He is weary, though, and is willing to march himself and his brothers to their deaths “as a clone should”: in battle. The reunion he has with Ahsoka is a melancholy one; while she is very happy to see him, Rex’s reluctance to rejoin his commander and return to the fighting in earnest is something that can be read into.

How exciting is it that the flagship Star Wars TV show, one ostensibly meant for kids, is entirely willing to makes these sorts of character developments happen? As with the two-part “Siege of Lothal” special that showed the heroes running scared and utterly helpless before the power of Darth Vader, “The Lost Commanders” and “Relics of the Old Republic” together paint a far more grim picture than one might expect from a show this colorful.

Rebels is a part of a united universe, and the realities of that universe do not change when they transfer from the pages of a novel or a movie screen. Darth Vader is still Darth Vader, the rebellion is still a cluster of disorganized cells, and what happened to the clones after the end of the war still isn’t pretty. PTSD, regrets, the rigors of accelerated aging and being phased out in favor of legions of conscripts have left the few survivors bitter shells, stripped of all but their devotion to duty.

It remains to be seen just what sort of a role Rex, Gregor and Wolffe will play in future episodes of Rebels, but the distinctness of their characters and extra dimensions brought by their imperfections makes them even more interesting characters than they were previously. There hasn’t been any white-washing of who the clones are now, or what they did before, so whatever happens with them or to them might not be pretty. But by now we should all expect that it will be worth watching.