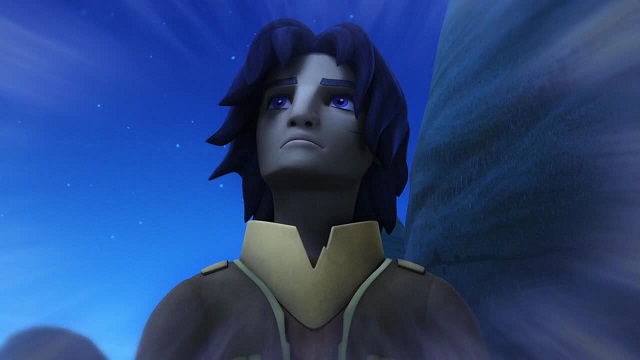 We’ve covered the way Rebels doles out its plots and themes quite a lot since the first season, how just as often as episodes wrap themselves up in a nice, neat little package, they leave tidbits and other things to drift with the possibility of being snagged later on. Some of them were obvious hooks, like Sabine referencing her time at the Imperial Academy, while others were rather more subtle. And as the show has now advanced into its second season, some of those plots both obvious and not have begun paying off.

Back in the first season, we learned about Ezra’s mixed feelings on his parents’ disappearance, how he wanted to find them but also didn’t want to be told that they had met an untimely fate. His encounters with those who had knowledge of their fate, most notably the scatterbrained Rodian Tseebo, provided a look into a boy’s complex psyche, where all of his years spent living on his own have insulated him against hope, but at the same time, something inside of him longs for his family to be alive and well somewhere.

Where we are now, at the midpoint to the second season, is a great place to look back at the series as a whole and how plots like Ezra’s search for his parents have shaped the show. Ezra’s choices in “Legacy” are different from the ones he made in the first season because Ezra himself is a different character now. The plot of the series has evolved as the characters (in this case Ezra) have grown. And the showrunners were patient enough (and had enough faith in their audience) to give the plot plenty of time to simmer before finally taking the cover off.

Very, very few shows meant aiming at a kid’s demographic will garden the plots they sow as effectively as Rebels has. Other DisneyXD shows like Avengers Assembled and the ever-popular Phineas and Ferb are far more iterative, where each episode has its own self-contained plot and there is little continuity between them. Rebels has its own single-episode plots, to be sure, but plots like Ezra’s parents don’t even pay off within the same season; Hera gathering whatever Tseebo knew about them happened back at the midpoint of the first season. 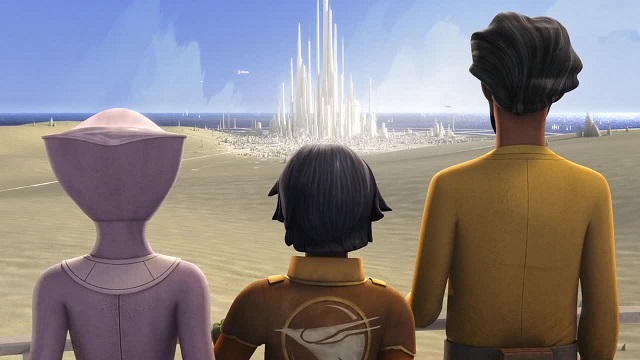 It takes quite a bit of faith in your audience to be willing to wait that long to finally bring back something from early in the story. They assume that not only did we pick up on the fact that Hera was gathering the information, but also that we remember that it happened after so much else has gone on since then. This isn’t a show that defaults to the lowest common denominator, it’s a show that acknowledges its audience’s intelligence and is willing to count on it in order to develop itself over the long term.

We discussed a lot of these very things in the past, of course, since the signs have been there from the beginning that this show has been serialized. But again, since we’re halfway through the second season, we’re seeing some very long-term plot threads finally being picked up again. We’ve gone from “here’s what might happen” to “here’s what happened”, and now we can discuss more of how it will continue to affect the show as things move forward.

Of course, the whole plot of the search for Ezra’s parents likely won’t be going any further forward after “Legacy”. But there are plenty of other plots that can run for just as long if not longer. Things like Agent Kallus’ role in the destruction of Lasan, or Kanan having a Jedi Holocron, or Lando running a small smuggling operation around Lothal, the list is almost infinite. What might be an important plot that recurs at a later time, and what might just be a little tidbit of character that gives the world a bit of extra flavor? We really won’t know until the show is finished.

While we certainly expected to see Ezra’s parents again, I don’t think anyone expected everything to pay off the way that it did, this far out from when it was originally established. Or perhaps, it paid off much sooner than anticipated, because the mystery of a missing family is the sort of plot that Star Wars likes to play out for all it’s worth. Rebels managed to not only play to its own strength of long-term storytelling but also to subvert expectations with how it did so.