Let’s face it: at least among adult Star Wars fans, there aren’t a whole lot of people who unreservedly love the Starkiller plot thread in The Force Awakens. To those, like myself, who do love the movie overall, it’s seen as a necessary evil or at worst an isolated misfire, while those who dislike the movie see it as perhaps the worst of a long list of haphazard original-trilogy knockoffs.

In the months leading up to the film’s release, as the existence of a superweapon became apparent, I made my feelings clear that I’d have been happier without it, or at least with a different spin on the idea—it being a bluff for propaganda purposes, for example, rather than a functioning weapon. Nevertheless, the film came out and boy, was it ever functional.

While I’d still say that it’s the weakest element in an otherwise very strong movie, the more I’ve thought about it, and the more I’ve learned about the First Order, the more I’ve come to terms with the Starkiller—what it represents out-of-universe, and what it suggests about the sequel-era GFFA in-universe.

Here in the real world, the Starkiller’s function is obvious: this is an old-fashioned Star Wars movie, and the old movies had superweapons in them. While A New Hope is the comparison people typically make, the Starkiller battle has much more in common with the Battle of Endor in Return of the Jedi, in that both air and ground forces are working to bring it down, and it’s thus a team effort rather than all falling on the shoulders of one person firing one torpedo. While this reduces the tension of the moment a good deal—just like it does when comparing Jedi itself to ANH—it underlines another aspect of the Battle of Endor: the superweapon as backdrop. The Death Star gave Leia, Han, and Lando something to busy themselves with, but we’d seen this story before and we knew, even in 1983, what was coming. The real story was Luke and Vader and the Emperor, and that’s where the real tension came from, not the larger battle going on around them. The same applies to Rey, Finn, Han and Kylo on Starkiller Base’s surface.

So, does it feel as scary as the original Death Star did at Yavin? No, nor is it supposed to. Beyond that, as I was saying recently, TFA is a sort of throat-clearing for the Star Wars film saga; some people have derisively called it a remix of the OT, but well, that’s kind of exactly what it is. More charitably, you could call it an overture for the post-George Lucas era—a synopsis and reintroduction of the themes of the story. In that light, to not include some kind of rephrasing of the Death Stars would seem almost disingenuous.

All that said, my real concerns a couple months back were less about TFA as a film than about the plausibility of an apparent rogue state like the First Order having the resources to build something that dwarfed the Death Stars in terms of both size and power. I went so far as to speculate that if it was real, perhaps it was ancient Centerpoint-esque technology that they stumbled upon in the Unknown Regions and simply got working.

While it remains possible that there’s at least a modicum of truth to that, General Hux states quite plainly in the film that the Order “built” the weapon. If we apply Occam’s Razor and disregard the chance that he’s arrogantly overstating things, that means they A) developed the technology, B) engineered a planet-sized implementation of it, and C) actually carved out a substantial portion of said planet to do so.

A is easy to wrap one’s head around, I think—prior to ANH, planet-killing technology appears to have been nigh-unthinkable, but so was an iPad forty years ago. Once you prove the concept, refining it and cheapening it tends to follow pretty naturally. We saw that process even within the OT itself, as the second Death Star was built far more quickly and sported a superlaser capable of targeting individual ships. Extrapolate another thirty years out, and the spectacle of the Starkiller firing sequence doesn’t seem totally absurd. The novelization actually does a lot of legwork on this, talking extensively (as the novelization is wont to do) about the borderline-theoretical physics at work—quintessence, phantom energy, pocket novas, and so on.

Jumping ahead to C for a moment, this was the thing that seemed most crazy to me at first—disregarding the science entirely, just carving out that much mass from the planet (where did it go?) seemed like an absurd undertaking. While there are all sorts of factors to consider here, not least a thirty-year timeline and the potential existence of advanced droid excavation technology and so forth, most useful is the possibility that the planet isn’t actually all that big. Taking the visuals in a Star Wars film too literally is a fool’s errand, so trying to make any kind of precise measurements based on the holograms in the briefing scene isn’t a good idea, but what we do know is that the Death Stars (depending on which one the film shows) were in the ballpark of 100-200 kilometers wide, and Starkiller Base is in the ballpark of ten times that size. Even a drastically liberal estimation puts it at two thousand kilometers in diameter—or in other words, a bit over half the size of the moon. Not quite as much digging after all, is it? 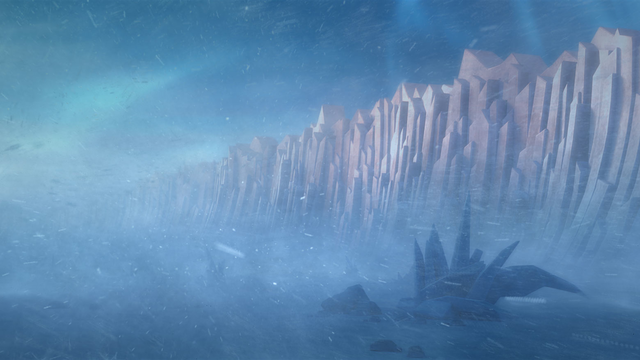 But it’s still got an atmosphere and standard-ish gravity, right? How does that work? That brings me back to B—engineering. The popular fan theory right now, and I see no reason to think this’ll be either confirmed or denied anytime soon, is that Starkiller Base is in fact Ilum, the lightsaber crystal planet that first appeared in the Expanded Universe and was eventually canonized by The Clone Wars. Their observed terrain is similar if not identical (see above), and Starkiller’s location in the TFA Visual Dictionary appears to correspond to Ilum’s location in the Legends Essential Atlas, but most importantly, Ilum is host to an unusual concentration of lightsaber crystals. Where historically there were a variety of said crystals with a variety of properties, in the new canon they’ve all been lumped together as “kyber” crystals, a name dating all the way back to the early drafts of Star Wars. Further, there’s been some interesting evidence in Star Wars Rebels that kyber crystals may be a component, or even the power source, of the Death Star’s superlaser. Last but not least, the TFA Incredible Cross-Sections mentions that some First Order weaponry also utilizes kyber crystals. Almost as if they had a bunch just lying around, huh?

Point being, “kyber” is basically the new canon shorthand for “handwavey magic power source”. If they turn out to be the secret ingredient in everything from lightsabers to the Death Stars, who’s to say what properties a whole planet full of them might have? Who’s to say that they wouldn’t make a tiny planet abnormally dense, and thus endow it with higher gravity?

My final point, though, is just the personal feeling I get from Starkiller—it’s Kylo Ren’s lightsaber writ large. For all its destructive power, and for all the cutting-edge science behind it, it feels…sloppy. The Death Stars were precision machines, packing both a mobile military base and a planet-scale sniper rifle into a fraction of the Starkiller’s volume. The Starkiller is more akin to a fire hose, sucking in raw energy from a nearby star and containing it just long enough to aim and fire—it’s unstable by definition, as if the Rebels has destroyed the second Death Star merely by turning the shield off. In an age when the Empire’s remnants don’t even have to pretend to care about governance or discretion, Starkiller is a perfect representation of its savage whims freed of all restraint and finesse. It makes the First Order scary not because of how awesome it is, but because of how easy it was for this bunch of mooks to put together, totally in secret. It’s superweapon as suitcase nuke.