Stories have power—and the narratives our societies choose to focus on will, for better or worse, begin to define our reality. The concept of Manifest Destiny helped usher in an age of colonization and imperialism that resulted in millions of deaths and the enslavement of millions more. The narrative of the “American Dream” fostered economic growth and productivity on a scale never seen before, though often at the cost of work-life balances and to the exclusion of those denied equal access to economic institutions. The 1980s conception of the “Welfare Queen” embedded itself into American consciousness and to this day inhibits anti-poverty efforts while encouraging racial animus.

Stories have power—and because of that, we must make sure we are not focusing on a narrative that may ultimately cause harm to others.  With that thought in mind, I worry: Does Star Wars promote the myth of redemptive violence (defined simply as “the belief that violence saves, that war brings peace, and that might makes right”)?

Recently Roy Scranton, an American veteran of the second Iraq war, argued in the New York Times that in Star Wars, “the violence of war has a power that unifies and enlightens…It’s a story about how violence makes us good.” In essence, Scranton argued that Star Wars is simply another piece of America’s cultural myth of redemptive violence. This myth, he argues, is emblematic of the US addiction to war and ultimately helps prop up the same powers that even now wreak violence around the globe.

If his critique is true, then every fan of Star Wars is part and parcel of systemic evil that the myth of redemptive violence has brought upon the world. As a fan, the possibility that this critique might be true frightens me. But is it?

To be sure, Star Wars contains plenty of violence that seems redemptive. Luke’s destruction of the first Death Star is portrayed as wholly righteous—it saves the rebel base, just in the nick of time! The Empire wasn’t defeated through diplomacy; it was overthrown by force of arms. It’s human nature to be drawn in to the huge explosions and epic battle sequences. 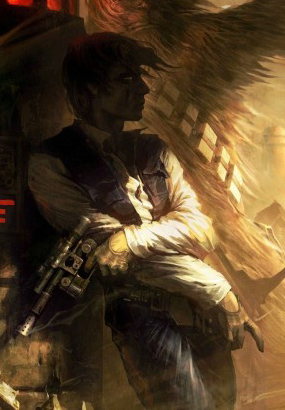 Or how about this example—the extrajudicial execution of Greedo. Han Solo, a stereotypical western gunslinger, temporarily dodges this debt collector with a single pull of the trigger (bringing out his weapon in what’s supposed to be a weapons-free zone). After killing a living being, he coolly stands up, tosses a coin to the barkeep, and strides away. Not only is violence redemptive here, it clearly is the only thing that saves Han’s skin. (Perhaps Lucas’ much-maligned change, where Greedo shoots first, reflects a discomfort with this cold-blooded killing).

Obviously one could find many examples in Star Wars where violence seems to save the day, where our noble heroes would otherwise be long gone without the quick violence of a warrior. Potentially even more problematic are occasions when the act of violence is portrayed as not merely justified, but even humorous (see: Ewoks pummeling stormtroopers in Return of the Jedi, the character Mr. Bones in Chuck Wendig’s Aftermath, the destruction of hapless battle droids in The Clone Wars, etc.).

Personally, I hope Rogue One will give us a more thoughtful wrestling with the horrors of war. Evidence and rumors suggest that this film will have a darker, less triumphant feel—perhaps we see the Rebels’ violence portrayed more negatively, rather than as purely redemptive. It’s even possible that we will we see Saw Gerrera’s Partisans engage in some controversial acts of terrorism, as hinted at in Claudia Gray’s Bloodline. If Rogue One is indeed darker, one might hope it shows the harsh results of violence from both sides—not just double down on how wicked the Empire is.

But even if Rogue One does delve into the savagery of war, that does not necessarily address the critique. After all, there are plenty of dark movies that expose the evils of violence while still ultimately centering on violence as the solution to evil (see: Hunger Games, Kill Bill, Saving Private Ryan, etc.). So let’s return to the initial question: does the story of Star Wars promote the myth of redemptive violence?

I believe that the answer is no, and that in actuality Star Wars goes beyond most films in critiquing that very ideology. Take Yoda—he in particular is the prophetic voice who tries to hold the Jedi to a higher moral standard than many of them might prefer. Yoda’s sadness at the start of the Clone Wars is telling—“Victory you say? Not victory. The shroud of the dark side has fallen.” In The Empire Strikes Back, a battle-weary, reflective Yoda teaches Luke the values of a Jedi. “Anger, fear, aggression; the dark side of the Force are they…A Jedi uses the Force for knowledge and defense, never for attack.”

But it’s not just Yoda. Luke, motivated by love for his father, takes this lesson to heart and refuses to kill Darth Vader in the climax of Return of the Jedi. Indeed the very title of Episode VI is apt, for in casting aside his sword, Luke is inaugurating a return of the true Jedi, those who refuse the easy seduction of violence. Contrast the ending of this film with the ending of The Avengers, where the villain’s defeat comes only when the larger, mightier Hulk throws Loki around like a rag doll.

I’m hopeful that the sequel trilogy will continue the anti-militaristic mindset established by Lucas in the first six films. In The Force Awakens, we see even the gunslinger Han Solo turn away from violence, daring to sacrifice himself out of hope for his son’s redemption. To see non-Jedi like Han (and even more minor characters like Lor San Tekka or Poe Dameron) exhibit compassion for those whom they would be expected to treat as their enemies helps confirm that the mercy Luke shows Vader in Return of the Jedi is part of a broader theme.

Much like our own world, violence is endemic in the Galaxy Far, Far Away. On a superficial level, Star Wars reflects that. But the moral arc of Star Wars takes a hard tack against violence as a solution. In fact, these acts of true redemption mentioned above are all the more striking because they seem so risky and unlikely given the context of the films. While its very name suggests that Star Wars is all about war, fans and critics who look deeper should see that the saga ultimately helps build a counternarrative to the myth of redemptive violence.

10 thoughts to “Star Wars and the Myth of Redemptive Violence”