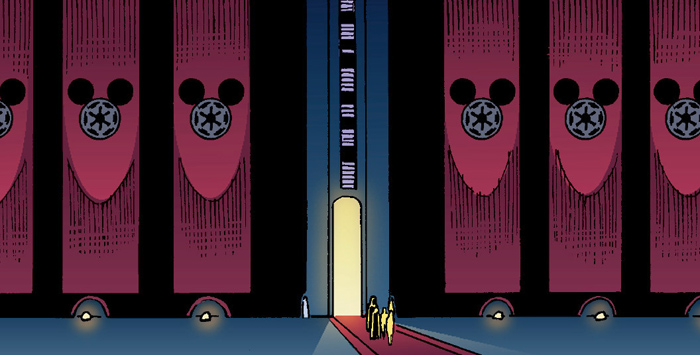 Stories like Star Wars exist to take us away from the mundane reality of life, to transport us to a more wondrous place.  Recent weeks have been, in real life, very sobering for those in the UK in the wake of the result of the referendum to stay or leave the European Union. So, in the style of bleak, gallows humour, what might the world of Star Wars really be like? Cue snapshots of an alternative history of the galaxy, far, far, fucking far, away….

Luke Skywalker crashed his landspeeder after being sold illicit moonshine by Wuher, who was subsequently shot by a customer who thought he was being poisoned. Investigation of Wuher’s bar showed that that accusation was not without merit. Fortunately for the galaxy, Skywalker recovered and Wuher was more attentive to merely covertly poisoning his customers from then on.

When told the Death Star was the ultimate in asteroid clearance technology – the galaxy believed it because the Coruscant Star was never wrong. The Emperor had closed meetings with the owner to discuss how to really run the galaxy. Said owner also assured the Emperor, in great detail, that the magazine’s journalists would never, ever slice Imperial communications in pursuit of a story. In similar vein, the documentary A Death Star Is Born was buried for being too accurate a representation of Imperial policy-making. 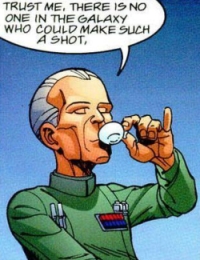 A little known fact was that the Death Star could have exited hyperspace in firing view of Yavin, so what went wrong? A comedy of errors, someone transposed a hyperspace number while another department forgot to refuel the engines before they left. The result was the wrong position, with not enough fuel to do a hyperspace jump but, just fine for engines so giving the Rebellion time enough to give the Death Star a double proton torpedo enema.

The Emperor finally lost all patience with his second-in-command and Vader was sent, nay, ordered on anger management training because Imperial Resources were fed up with the recruitment budget for the year being drained within a month by him. That and the success rate of recruitment campaigns had gone way down due to Vader’s reputation preceding him. Just the prospect of potentially working for, followed by termination by, Lord Vader was sufficient to deter applicants.

The mysterious Fleet Admiral, who came to be the main player in the shadows of the war post-Endor, demonstrated a warped sense of humour in assignments. Admirals who had dumped their ships’ rubbish on planets ended up in charge of Environmental Protection, while those known for favouring planetary bombardment were assigned Urban Redevelopment and Regeneration. Some muttered very quietly that the only reason the Fleet Admiral was even in power was due to everyone else legging it and leaving the mess for someone else to clean up. This was always carefully uttered, for the Fleet Admiral’s view of termination was reputed to be very final.

In the wake of the final victory against the Empire at the Battle of Jakku, humans start to complain that the aliens are taking ‘their’ jobs as pilots, that they’re taking space on worlds humans settled – no, they cannot share. Humans fought the Empire more, those aliens should be grateful for their liberation. That the humans neatly forgot that it was their predecessors who were the main backers of the Empire went entirely unnoticed.

The family of Admiral Ozzel added to the Imperial Remnant’s financial woes by bringing a class action lawsuit built around Ozzel’s wrongful and quite literal termination by Vader. Arguing successfully that responsibility for compensation fell to the successor body, the family lawyer cleaned out the Remnant.

The real reason Han Solo was always short of cash was speeding tickets, in twelve star systems no less, all with variable penalties levied for non-payment. Hooking up with Leia required Han to go legit so they all had to be paid – it took a while. Had that initial Kessel Run counted, Han could have made a killing and paid them easily, as it was – much, much longer.

Twenty years after the death of the Emperor, all manner of revelations were found relating to perverted sexual desire and abuse. It was reported that Darth Sidious was carefully referred to in high-level Imperial circles as Sid’ll Fix It. No one, of course, was so foolish as to say such things openly. The Coruscant Star managed to spin itself out of a host of accusations ranging from merely cover-up to being an Imperial propaganda mouthpiece by playing the card that it had been terrified of the Emperor and Vader all along. This was deemed plausible by the New Republic, for both figures still inspired terror even after being dead for years.

Young Ben Solo was a conscientious student, he attended school, he did his homework, he was well-liked. The media of the galaxy, however, along with the older generation did not see him or his generation in so positive a light.  Soft, coddled and pampered, the new generation had been cosseted by peace, clearly a war was required to make them really grow up so why not supply one? The Emperor would have approved, as the Clone Wars worked out so well for him, were it not for the matter of an insignificant rebellion… There was no way history could repeat itself, surely?

They also ensured a steady well of resentment between the generations by writing off their successors every chance they got. Exams failed? Clearly, the kids are lazy little bastards. Exams passed? Pah, they had it easy just being able to take an exam when it used to be at sixteen you were fighting in the Galactic Civil War. In contrast, Ben’s parents were supportive, but there was only so much that could be done against such corrosive poison. Little did they know the galaxy would reap a whirlwind.

The First Order had told itself for years that it was preparing to fight a war with a deadly intelligent and well-resourced adversary. What it failed to consider was a number of factors. That the Republic had allowed its skilled officers to retire and their replacements were nowhere near their equal in military skill but were excellent in office politics. That the same generals then procured weaponry and armour on the cheap, from galactic conglomerates that made up for the lack of quality in their products with stunning procurement ability. They may not have known how to do a good job but they knew how to make an excellent bid. Combined with Mothma’s demilitarization programme and the division between the generations, the Republic was wide open for conquest. Had the First Order known this they would not have needed to spend all their time building the Starkiller – they could have just steam-rollered the Republic.

So, there you go. A few quick snapshots of what might be if Star Wars really took its inspiration from reality. As it is, it instead goes for that magical combination of being just real enough to be plausible while all manner of fantastical aspects. And it is those aspects that take us away from the kind of insanity sketched out here. So, no matter how dark a story may claim to be, it’s unlikely to really be that bad…