With the release of its December 2016 solicitations, Marvel ignited a firestorm of speculation. Among its usual Star Wars titles was Star Wars: Classified, a new ongoing series. Given its December launch and the secrecy surrounding the project, fans guessed it could be one of two things: a Rogue One tie-in or a series featuring Darth Vader’s Doctor Aphra.

Now that Darth Vader has concluded, the speculation has been laid to rest.  Doctor Aphra, penned by Darth Vader scribe Kieron Gillen, will focus on the not-so-good doctor’s exploits after escaping death at the hands of her former boss.

The news that Aphra will be headlining her own series marks a number of firsts, both for Marvel’s line of Star Wars comics and for the Star Wars franchise as a whole. It’s also a welcome addition to Marvel and Star Wars’ growing number of stories centering on women and people of color.

Aphra’s status as the leading woman of her own series is an exciting prospect, not just for her fans, but also for fans of a growing new expanded universe. Doctor Aphra will be the first ongoing comic series since the reboot to focus on a homegrown comics hero (one not first appearing in the films or TV shows). For fans who cut their teeth on Dark Horse’s stable of original characters, her new series is the first sign that Marvel is willing to step away from the on-screen playground. 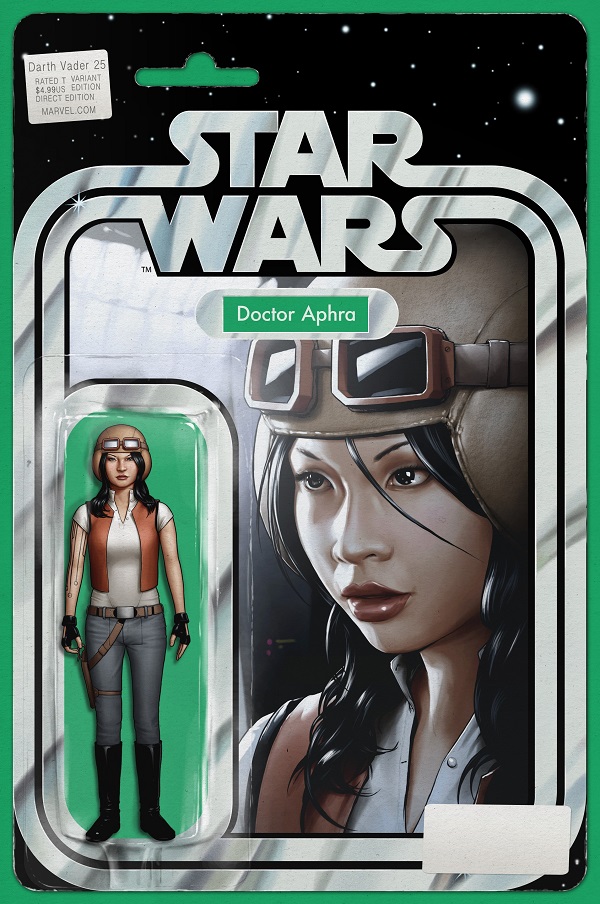 The choice of Aphra as the first original character to helm her own series speaks to her popularity. Marvel has built up a decent roster of characters they could have chosen, and there are a handful of characters from novels who might have been able to carry a comic series as well. Yet, of all those options, Marvel chose Aphra. They might have a hundred reasons for that selection, but if she wasn’t popular or interesting to fans, she’d never have made the cut. Aphra has enough Star Wars and Marvel fans eager to see her next adventures that Marvel promoted her to series lead.

Marvel is past due for another woman lead, especially in an ongoing series. Since the publication of Star Wars #1 in January 2015, only three storylines have positioned a woman front-and-center: the Princess Leia miniseries, the Shattered Empire miniseries, and the “Rebel Jail” arc of the Star Wars series. For comparison, Marvel has published six miniseries altogether and its four ongoing series have netted twelve story arcs between them.

Leia stars in two of those three stories. While Leia is wonderful for many old and newfound reasons, she is familiar, just one woman in an entire galaxy, and has received a fair bit of attention in other quarters. Shara Bey, the main character of Shattered Empire, is an engaging character in her own right, but the series lasts only four issues and gives almost as much attention to movie characters as it does to Shara Bey herself. Aphra’s series, in contrast, will be ongoing and centered solely on her.

Marvel has been more willing to share time in the limelight with its characters of color. Shara Bey’s son, Poe Dameron, has his own ongoing series, as did Kanan Jarrus (his series ended earlier this year). Lando Calrissian also starred in a miniseries. Still, until Aphra, Shara Bey stood alone as the only woman of color to helm a Marvel series. In fact, Aphra and Shara Bey are the only women of color in the starring role in any Star Wars media. Only Ciena Ree of Lost Stars comes close, and she shares top billing with her love interest, Thane Kyrell.

Not only is Aphra a woman and a person of color, she’s also queer. This is where Doctor Aphra truly breaks ground—its focus on a queer woman’s story told in her own series. There has never been, in the history of the Star Wars franchise, a book or comic or video game to make a queer character its main character. The pre-reboot EU only had three queer characters, all of whom were supporting characters. Since 2014, Del Rey has introduced Sinjir Rath Velus, a gay man and one of the Aftermath trilogy’s ensemble cast, as well as a handful of queer supporting and background characters.

While Sinjir Rath Velus is a main character, he is not the main character. That honor is shared with the rest of Aftermath’s motley crew. This new ongoing is a vehicle for Aphra’s story alone; hers is the name splashed across its first cover. 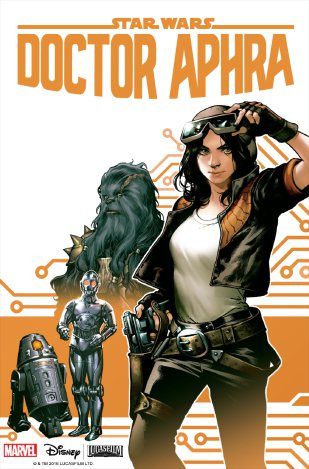 For Marvel to choose Aphra as their first original series lead suggests that they have faith that she can carry a series. At the very least, she’s a strong enough candidate that they’re willing to make her their first experiment. [1]Interesting, but not relevant to Star Wars: I believe, though I’m not certain, that Aphra will be the first queer character to helm any ongoing Marvel series, not just Star Wars. She just edges out … Continue reading Of all their new characters, they believe a queer woman of color has the best chance to separate fans from their hard-earned cash.

From a cynical perspective, this move could be taken as a bone thrown to women, people of color, and queer people who would otherwise be uninterested. But that view ignores that there are already people with a variety of identities in fandom. Moreover, the majority of people talking about Aphra’s sexuality and her status as first queer Star Wars lead are already fans, and started the conversation about Aphra’s identity of their own volition.

More likely is that fans genuinely like Aphra; they find her engaging, like her humor, and enjoy her dark-Indiana Jones vibe. That she happens to be a woman, or a person of color, or queer, is probably incidental for many folks. Some of them are excited specifically because of those facets of her identity, and some take it as just part of a character they happen to like.

Aphra’s new series means something for people who want to see Star Wars expand far, far beyond films and television. It means something for fans who love Star Wars and are finally getting to see stories about people like them. With Doctor Aphra, Marvel and Star Wars are saying that they are ready to step outside the safe haven of on-screen characters. More importantly, they are saying that diversity in Star Wars is here, and fans are ready for it.

4 thoughts to “Doctor Aphra Goes Solo: Marvel Changes it Up and Why it Matters”