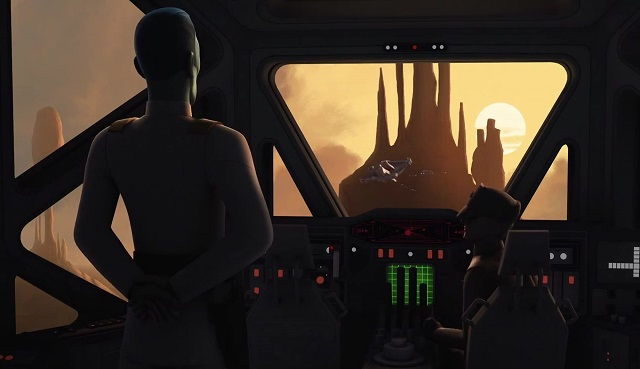 The pendulum of Rebels has moved back and forth between the Force-centric and the martial-centric quite a bit this season so far. It’s been a gradually growing shift of emphasis from episodes based around Ezra and Kanan trying to pick up the pieces of what happened after “Twilight of the Apprentice” to the theme of unity beginning to grow among the rebel cells that we saw through the first two seasons. As the timeline moves closer to Rogue One and A New Hope, the Rebel Alliance that we know and love is in its infant stages, with groups working in closer and closer harmony. This is not done in a vacuum, though, since greater rebel activity has naturally drawn more and more attention to the various “fulcrums” of that same unity across the galaxy.

More than anything, this week’s episode demonstrated the escalation between the two major factions we’ve seen throughout Rebels. The Rebellion is beginning to take shape, with the Ryloth cell working hand in hand with Hera to coordinate activities and evacuations of key people like Cham Syndulla after being put on the run by Imperial forces. At the same time, however, Grand Admiral Thrawn has made his way to Ryloth due either to orders from on high or by his own volition, backing up Captain Slavin and turning the tide against Cham and his forces by promoting swift, decisive assaults against key positions, like Cham’s home province.

The larger Rebellion is forming, and Thrawn knows it. He preys on the connection between Hera and her father by blockading Ryloth and forcing Cham to go on the run, knowing that she and her crew would be along shortly to try and run the blockade and save the day. But the destruction of Hera’s group and their cell is not the goal he has set for himself; he values information more than the piddling victory that would come from the death or capture of the Syndulla family or even the subjugation of Ryloth.

Thrawn knows (and we know) that the Rebellion will continue to grow. References to people like General Dodonna and Saw Gerrera are more that just name-dropping people who are fighting the same fight elsewhere. They are foreshadowing. The introduction of Wedge Antilles and Derek ‘Hobbie’ Klivian last week was a view of the new generation of rebels coming up, of those who have heard about the fight that is already going on and jumping at the opportunity to join in. Cham and Hera represent the older generation, the ones who fought Separatist occupation during the Clone Wars and refuse to surrender the freedom their comrades died for then. 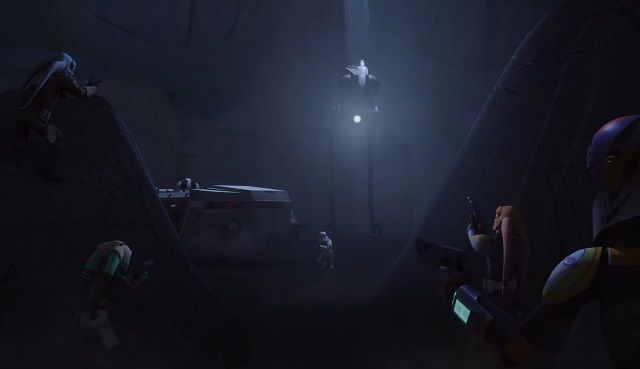 The bridging of those generations is what makes Rebels the show that it is. By using characters from its predecessor show, and by referencing that era and showing the parallels and pain wrought in the characters by years of war, Rebels is going beyond what any other story was able to do in this era. Back when the EU was young, the rise of the Empire and formation of the Rebellion happened off-screen in relative obscurity, shown in novels and RPG sourcebooks. The events of the Clone Wars were at first entirely unknown (and off-limits), and once they started to become known it was too late to go back and change a lot of the things that had happened. That left two distinct eras, the original trilogy era and the prequel trilogy era, the Galactic Civil War and the Clone Wars, with a gulf between them.

Now, the two exist on the same plane. Those events in the novels and RPG books didn’t happen, or if they did they happened differently than we were told before. People like Saw Gerrera, Ahsoka Tano and Cham Syndulla are important to the formation of the Rebellion in a way that makes the era they inhabit matter more, not just within their own stories, but beyond. People who fought for the galaxy’s freedom once would not lie back and watch as it was threatened again. The ties that bind the galaxy together from a narrative standpoint are that much stronger now that so much more of the recent past has been shown and told. The rebel cells that fought the Empire before the Alliance did not spring from nowhere.

While Thrawn’s plan for the utter destruction of the Rebel fleet won’t come to pass, his theory on its existence or pending formation is entirely accurate. We know that he won’t entirely succeed because some people have to survive and fight another day, once the Death Star is unveiled for the first time above Alderaan. What Rebels will show us is the Empire doing whatever it can to keep that threat from forming before it becomes a true, real threat. We know that doesn’t happen, but why let that ruin the fun?

One thought to “Rebels Revisited: Escalation”