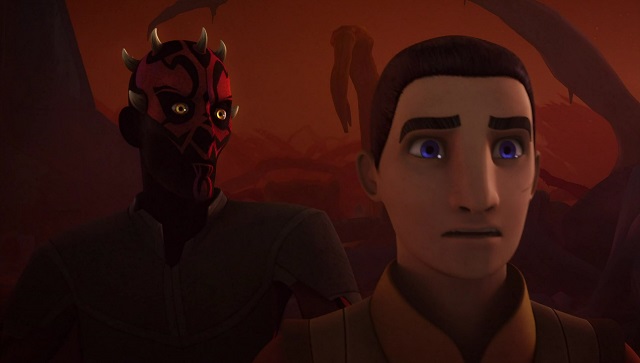 Star Wars Rebels is now at its annual mid-season break, which we usually take as an opportunity to review the first half of the season and speculate some into what might be to come in the latter half. “Visions and Voices” throws some of that out of the window by packing quite a lot of foreshadowing into a single episode that sets up many events of the next part of the show.

This season has been busy building two plots at once: a new foe that the Rebels are going up against just as the disparate cells are beginning to unite, and following up on the events of season two’s conclusion. While most of the season to this point has been concerned with the game of chess that Thrawn is playing and looking forward to his plan to destroy the Rebellion, there has been a lot of follow-up on the events at the end of season two, both in terms of the character dynamics and in terms of the plot itself changing.

Kanan is blind, and withdrew himself from the others so he could find peace with his condition and with the Force. Ezra has grown, but has entrenched himself even more deeply in his obsession with destroying the Sith. We saw some of these effects at the beginning of the season as Bendu was introduced, the Sith holocron came into play, and then Maul was brought back onto the scene.

We mentioned it in a previous column, but Ezra and Maul play off of each other very well, not because Ezra is naïve enough to wholeheartedly believe Maul, but because Maul is able to manipulate him regardless by playing off of the boy’s emotional vulnerability. “Visions and Voices” gives their relationship another overhaul, as previous events have left Maul rather manic and erratic, and we got to see what effect that has had on Ezra as well, with the same sort of aggressiveness and swings of mood that Maul has exhibited in the past.

But it was the conclusion to the episode that really gave us something to dig our teeth into. Maul and Ezra finally started to make sense of the vision the holocrons had shown them earlier in the season, and they realized (or Maul realized and only told Ezra later) that they were being show the same thing: a planet with twin suns, the hideaway of one of the only Jedi Masters left alive by the Empire: Obi-Wan Kenobi.

This is a dramatic paradigm shift for Rebels to undergo at this point. Very few movie-based characters have been more than walk-on cameos to this point, aside from Tarkin and possibly Vader. Now, in a mirror to the search for Luke Skywalker in The Force Awakens, Ezra and Maul are now hunting for Obi-Wan for two entirely separate reasons. Maul, as ever, is driven by hatred and a primal need for vengeance, still a slave to the same emotion that has kept him alive in the dark side. Ezra sees Obi-Wan as the solution to the same MacGuffin problem that he has been trying to solve since the beginning of season two: the destruction of the Sith. Exactly what he hopes Obi-Wan will be able to do is another matter; Ezra has a tendency to chase the objects and people he sees in his visions without really thinking about the consequences or ramifications.

Here is the other ramification of what the search may bring: we know only one character of all of them who must survive past the events of the show: Obi-Wan himself. If it comes to a confrontation, a fight, an ambush, only one character is guaranteed to walk away from the ensuing scrum. And if Ezra and Kanan do meet Obi-Wan, what then? He will never leave Tatooine, he has a sacred charge while he is there and leaving that charge to fight a battle he has already lost once, long ago, is not something I can see him doing. 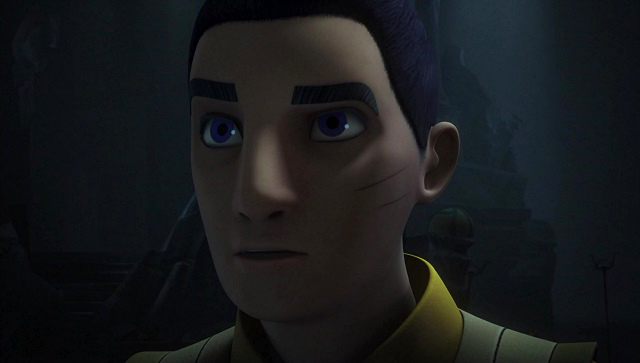 Ezra’s search is, to use the TV Tropes term, a Shaggy Dog Story: “a high level of build-up and complicating action, only to be resolved with an anti-climax or ironic reversal, usually one that makes the entire story meaningless.” Even if he searches, and hunts, and finds, and no matter what he sacrifices to find Tatooine, to find Obi-Wan, we as the audience know that his search will end without bearing any meaningful fruit. Not the fruit that Ezra expects, anyway. Obi-Wan might hold the secret that will destroy the Sith, from a certain point of view, but it is not something for Ezra to commandeer for his own fight. It is not as simple as recruiting someone to join in their fight as it was with people like Wedge and Hobbie, or even Ahsoka. Obi-Wan is an old man now, what little he might contribute to the Rebellion would not be in martial action.

How else might this end? With Obi-Wan telling them that he cannot help them? Will he turn them away, insist that his days of fighting are over and that, if they know what is good for them, they should find a place to hide as far from the Sith as possible? And what about Maul? He already knows what planet Obi-Wan is hiding on, an advantage that might lead him to discovering his old nemesis before Kanan and Ezra even know he is there. He is apparently searching for Kenobi in order to kill him, but just as we know that Ezra’s search won’t end how he expects, we know that Maul’s crusade will likewise end in failure. It ends, as Maul said, where it began.

There are a whole realm of possibilities and endings opened up for this season now. It could end with a tremendous battle in the Dune Sea. Or it could happen off-screen, with Ezra arriving at Old Ben’s home only to be told that Obi-Wan Kenobi died long ago. Kanan could die. Maul could die. There are tremendous possibilities here that go far above and beyond what might be the expected resolution of events. And that’s one of the show’s greatest narrative strengths this season: Ezra is on a quest for something that he will not get.

You might think, in a show meant for a younger age demographic, that everything that the hero searches for and tries to get is something that he should have, and the message will be one about chasing your dreams, or persevering through adversity. Not this time. Ezra will not find what he is looking for, and while the resolution might not be as obviously ominous as the massive fight on Malachor last season, it will still be an inevitable downer. Ezra will never find what he is looking for. It is also a valid concern whether he is even looking for the right thing.

Ezra still thinks more like a street-rat than a Jedi. He sees the key to his future, to protecting his friends and saving them from the fate he believes befell Ahsoka on Malachor, is to fight and defeat the Sith. At the same time, Kanan has been learning that violence and confrontation are not the Jedi way, and he has been encouraged, by his own blindness and by teachers like Yoda, the apparition of the Inquisitor, and Bendu, to seek another path. Unfortunately, it seems he is not passing that lesson on to Ezra yet, meaning he still flails away at a hopeless goal that, despite his good intentions, will only lead to more heartbreak. That is not us being philosophical, either, it’s narrative: Ezra versus Vader round two will only end one way no matter what the Sith holocron told him or what he learns from Obi-Wan.

There is a lot more to unpack about this episode as well, such as the implications of all of Maul’s collection in the Dathomiri cave, the influence of the Nightsister spirits on Ezra’s actions and the discussion of their magic versus the Force, and of course Sabine retaining the Darksaber just as the curtain was drawn. The focus of this article, though, is on what the show’s focus has been: Ezra and his story. Rebels is giving us a main character who mirrors characters like Luke, Anakin and even Rey to some degree, but still maintains his own uniqueness by virtue of walking a unique path: angry and determined, but surrounded by helpful friends in a unique time for a Force-sensitive youth to live. What happens to him, what fruits his search for a weapon to defeat the Sith will bear, is what the focus has been on right from the beginning, and the conclusion of what happens to him is still very much up in the air. Throwing a search for Obi-Wan into the mix is a fascinating step to take toward that, and one that will lead in some fascinating and unexpected directions no matter what happens.

One thought to “Rebels Revisited: Revenge and Hope”