Yet, for those of us who watched the trailers, it is also a strange finished product. On the one hand the macro elements are all present – the ground battles, the worlds, the characters, but the changes in the micro aspects indicate the substantive reshoots. There are entire lines present in the earlier trailers that never appear in the film, there are shots that never turn up. It makes for a somewhat disconcerting viewing. What might have been the road not taken? Given the portraits of the Rebellion and Jyn in the trailers, I suspect it may have been a harsher picture. A more cynical and colder Jyn, a more battle-hardened Rebellion, which likely gave rise to the fear, not unwarranted, that viewers may not back both.

A while back, myself and David Schwarz did a couple of articles on our hopes for the film based on the trailers available. How does it fare in these respects? Of the first set: New characters and aesthetics, a statement of continuity cohesion and emphasis on the “Death” in Death Star. It’s an unequivocal hat-trick. It manages to give us those at the bottom of the Rebellion, those who don’t get to boss everyone around, and it looks and feels different. It is like no other SW movie, yet it is very much a SW movie. In terms of being a statement of what Disney and Lucasfilm have been up to since April 2014, it is a very strong one.

Of the second set: the death of Imperial cool, boosting A New Hope (ANH) and redeeming the prequel concept.  The latter two I see as no contest, after exiting the cinema I had a real inclination to re-watch the film that started it all. As a prequel to ANH, the film is superb, giving us the big, bold story of how they got the Death Star plans. Will it kill the idea of the Empire’s ‘cool’? Far harder to say, as the sequences with the Empire do indeed emphasize the size and scale of it all: The shield ring at Scarif, its guardian Star Destroyers and the Death Star that dwarfs them all. (One of the film’s strongest points is it always constructs its images to give the viewer a sense of scale.) 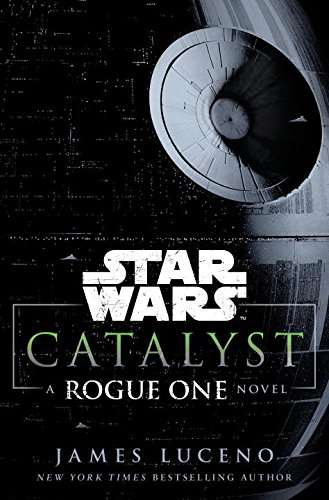 The Catalyst tie-in has a strange, strange effect on the film. In some respects it heightens and increases the impact of scenes greatly, while in character terms Krennic suffers quite badly as a villain. The reason for the latter is what can be termed the Bigger Bastard effect. When he is on his own, Krennic is an an excellent villain, with Tarkin showing up only briefly in the story, principally to show Krennic how outclassed he actually is at the top levels of Imperial politics. In the film Krennic gets overshadowed by first Tarkin and then Vader, the only way to really complete his humiliation is if the Emperor dropped by, Krennic goes for an introduction and gets met with a “who the hell are you?”

Where Catalyst really improves the film is in the opening and end scenes. In both, it gives those scenes far more power as you know far more of the respective players. Who they are, what they did and how they came to be where they are. It also gives a far better sense of the importance of the Death Star to the Imperial regime. It is far more than simply a vanity project. The film also continues strands from it like the Empire stripping out kyber crystals wherever they find them, like in Jedi temples. The sense is that the entire galaxy and all those in it are being irrevocably sucked into a vortex of corruption. Only in ANH does the destruction of the Death Star blast the first gaping hole in Darth Sidious’s grand design.

There is a designation for the Star Wars fan who is interested in how a space battle can be conducted and the ships involved. The term is ‘Fleet Junkie’. For a Fleet Junkie the final battle of Rogue One is a dream given form. Just as a martial artist will see a fight in their discipline very differently to the casual watcher, so it is with a space battle for a Fleet Junkie. It is not simply that the VFX show spaceships blasting the crap out of each other brilliantly, but how they are doing so. A good example is Y-wings. In ANH, the viewer sees them as cannon fodder for Vader and the TIEs. This is unfair, for the Y-wing is not a fighter, it is a bomber. In Rogue One, the Y-wings finally get to emerge out of the shadow of the X- and A-wings and show what they’re really good at. That happens to be bombing the shit out of a Star Destroyer! That it happens with a massive launch of ion torpedoes is icing on the cake. The sequence looks stunning, but until now was never done in film, only in books and comics or games.

It doesn’t stop there either. Rogue One’s final battle has a great sense of strategy and tactics which hasn’t been done in film before. Before, most battles have been reactive, the Rebellion responding to the Empire. Though the Empire is ascendant with the Death Star, it isn’t at Scarif when it all kicks off. Thus, for the first time, we see the Rebellion taking the war to the Empire and the Empire having to respond when caught on the hop. It’s a very refreshing reversal and I haven’t even mentioned the use of a Hammerhead cruiser – and I’m not going to because it’s one of the coolest and most epic sequences in the entire film. (Even if I did write a summary of it, it still wouldn’t get anywhere near how great it is, you just have to see it.)

Yes, it’s not perfect – the death troopers were a disappointment, and did they have to be quite so tidy as to kill everyone – but everything else worked very well for me, including the soundtrack. Doing a SW soundtrack when your name isn’t John Williams isn’t easy, but what gets overlooked is The Imperial March only turns up later, it’s not in ANH. The Imperial theme that is in ANH has some quite neat nods paid to it by Giacchino in the soundtrack. There are also some other variations on Williams’s themes in it too. Finally, David and I had discussed what this film might mean for the future anthology films and there is now one clear answer: They’ve a lot to live up to!

One thought to “Rogue One: Trailers, Tie-Ins and Fleet Junkies – Oh My!”