Mike: While last week’s two-parter obviously had a much more overt link to the larger narrative of the Rebellion in the form of Saw Gerrera, this episode struck me as having much more to say about the war itself, via the Empire’s differing approach to finding rebel bases here compared to the opening of The Empire Strikes Back. At first I wasn’t crazy about the idea of an Imperial probe droid stumbling upon Atollon so soon, and I’m still not a fan of the possibility that the Phoenix cell will eventually flee Atollon for Yavin (though that’s another topic entirely), but as the episode unfolded I caught lots of key details that changed how I saw what was happening.

First of all, of course, it’s not a probe droid—not technically. This thing is designated an “infiltrator” droid, and rather than immediately report its findings, it’s designed to blend in at any potential base for an indeterminate amount of time. While both it and the probe droid have self-destruct mechanisms, the infiltrator’s is substantially more powerful. I could be wrong, but this suggests to me that it may well have been designed to transmit its findings to the Empire and then go ahead and detonate itself anyway.

Why wouldn’t they want the standard probe droids to do that, too? Paradoxically, I think the more bad-ass infiltrator model implies that the Empire, even Thrawn, isn’t taking the rebels as seriously yet as they are in ESB. Where probe droids appear to be more basic models built to cover huge areas of space without actually engaging in hostilities, the infiltrator plays a more delicate game, and could have taken Chopper Base out all on its own—or at least, that’s what it’s designed for.

And then there’s Thrawn himself—he who dismissed the Phoenix cell as chump change early in the season. The fact that he and the ISB, at least in the form of Kallus, are coordinating this search demonstrates that rebel bases, even Thrawn’s hypothesized rebel fleet, are thus far a much lower priority than they will be after the Death Star is destroyed; simply contrast Kallus’s dismissal of the missing droid here with the similar scene in ESB, where the person making these calls is Darth Goddamn Vader. Thrawn may be big and scary from our heroes’ point of view, but this episode served as a reminder that the Empire is still very much playing small ball here, and that’s likely the only reason the Ghost crew have survived this long. 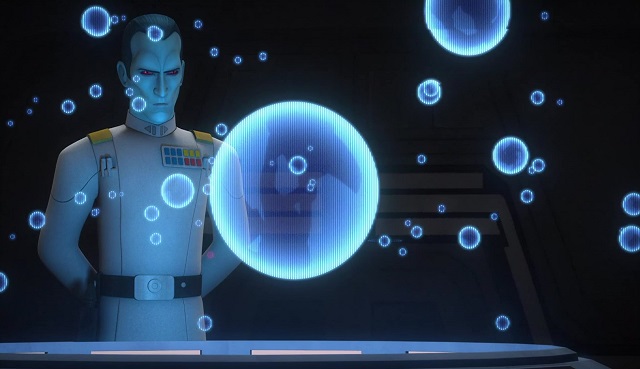 Ben: The infiltrator droid has an interesting loadout for its apparent mission. As Zeb points out, it’s armed to the teeth with blasters and combat protocols that make it more than capable of taking Zeb on and out in hand to hand combat. It’s also disguised as a protocol droid and not given any more than very basic infiltration and data analysis programming, so its disguise really isn’t that good for long-term infiltration. And, of course, there is the fact that it has a proton warhead built into its chest that’s capable of taking out a Star Destroyer.

The droid’s purpose seems to me to be a more combat oriented one than the probe droid from Empire Strikes Back. Especially since it, unlike the probe, does not have any long-range communication equipment built into it. I do have to wonder exactly what Thrawn had in mind when he had the droids sent out to search. If he just wanted to scout, he could use probe droids, we’ve seen the Empire use them before on other worlds. Thrawn seems to be explicitly gunning for the extermination of the cell, or at least to hand it drastic losses, which is contrary to what he’s said and done before.

Of course, the droid was damaged and its memory core basically emptied, so who knows? My thinking is that it was not sent with the intention of combat at all, unless it was discovered. It was sent just to infiltrate and give Thrawn a source of information within the Rebel cell, feeding him raw numbers and data and any other information that it found. I highly doubt that Thrawn would have wanted his pet rebels damaged while they were still useful and could lead him to the larger fleet. And it could potentially blend in with them far easier disguised as a protocol droid; everyone in Phoenix Squadron at this point probably knows to shoot probe droids on sight.

Thrawn values information above all else, and his mission is not the destruction of Phoenix Squadron but the destruction of the entire rebel fleet, perhaps of the entire organized Rebellion. Phoenix Squadron is his key to the larger rebellion, them and the spy that he has in his ranks. Either Thrawn sent the droid to infiltrate them and report back, or he knew that there was a training exercise going on and sent the droid to destroy their base while most of them were away, forcing them to go nomad again and hopefully lead him on up the chain toward the higher echelons of rebel command. Which sounds like a giant leap of logic, but since we are talking about Thrawn here, I wouldn’t put it past him.