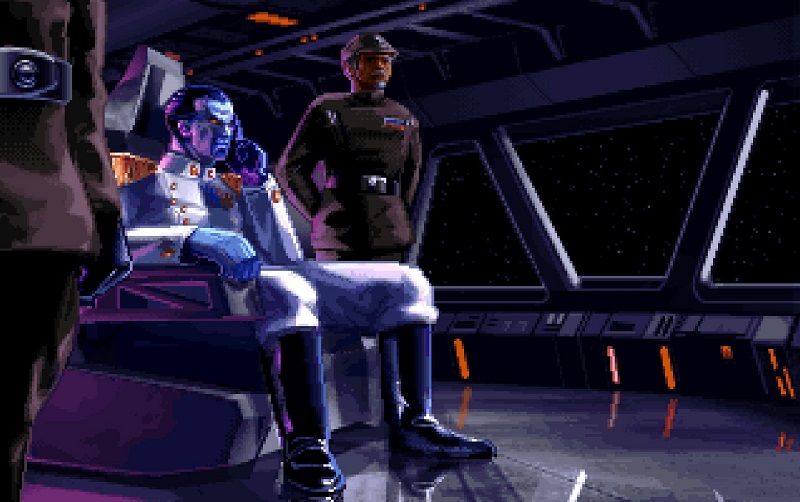 As the primary antagonist of the inaugural nineties Expanded Universe trilogy, Grand Admiral Thrawn presented a different sort of Imperial villain – one who was intellectual, collected, and yet not darkly sinister. Thrawn stands out and his Empire seems to take on a different tone from the Empire of Palpatine. He presents a better way – order without cruelty, governance without megalomania. Inspired by Napoleon, Rommel, Alexander the Great, and others, Grand Admiral Thrawn is nigh-invincible – defeated but for circumstances – and with him dies the dream of a better Empire. But is all of that true? We’re a pretty big fan of Thrawn – in fact, he’s one of the early Imperial characters we first latched onto as a villain worthy of respect and admiration (having read Kevin J. Anderson and Mike Stackpole prior to Zahn). He was unlike any Star Wars villain to come before or since, and Thrawn very rightly generated a lot of buzz and excitement when his return to the Star Wars canon was announced at Celebration Europe this July. We wanted to say that first as a bit of a disclaimer – that we’re a big fan of Thrawn – before getting to the gist of this article: which is that Grand Admiral Thrawn is tremendously overrated. Now wait – this isn’t one of those “you should feel bad for liking this, and here’s all the reasons why you’re wrong” pieces. The thing about Thrawn is that he’s not perfect – he is flawed, and has made some pretty colossal blunders just in the Thrawn trilogy set of books.

Both in and out of universe, people tend to assume Thrawn is perfect and unbeatable. Out of universe, that can occasionally manifest into excessive fannishness or dislike for a character that is “better” than the film villains. In universe, that manifests in characters assuming that Thrawn is completely beyond the abilities of any of the protagonists to defeat. But Thrawn isn’t invincible – far from it. He makes assumptions, he makes convoluted plans that fail when the slightest thread is unraveled, and he ultimately creates a system that cannot outlast his own demise. He’s also every bit the villain Darth Vader and the Emperor were – he supports the Empire’s mission, and even though later EU books try to put his decision to serve the Emperor into a noble light, the truth is that he literally made a deal with the devil and agreed to serve him.

Here’s the trick though: that’s what makes Thrawn work, and that’s what makes him so good. He operates at a higher tempo than most of his opponents, and gambles with hunches and convoluted plans where the pay-off is so spectacular that it looks like magic. Thrawn not only plays to his opponents’ psychology through his characteristic artistically-informed military tactics, but by causing them to doubt themselves and their own abilities by believing that Thrawn would be aware of their every move. Thrawn uses his own reputation and his opponent’s self-doubts as a weapon, and that’s rather more impressive than if he were simply an all-seeing mastermind. Thrawn’s a genius, but he’s also part charlatan – something that Timothy Zahn himself played off of in his sequel Hand of Thrawn duology that ended the Bantam run of the EU. It’s something we hope to see again in Star Wars Rebels – the mastermind and the trickster, whose evil is of a different shade but nonetheless recognizable as such.