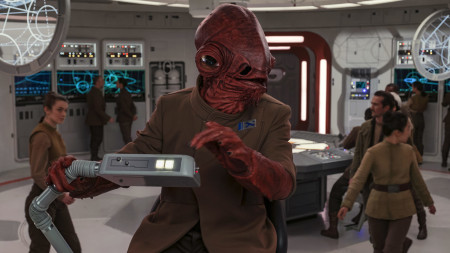 Ackbar meets his end on the bridge of the Star Cruiser Raddus, doing his duty until the last moment. For those of you not as familiar with the current canon, Ackbar leaves a quiet retirement to come to Leia’s side when she forms the Resistance. He leaves the safety of his home on Mon Cala, determined to fight one more time for the freedom and liberty of the galaxy. He’s over ninety years old, but that doesn’t matter. Ackbar is back – and he does his duty.

Some people focus a lot on the negative aspects of fandom, but one of the best parts of it has been on display for me personally these past days and weeks. Friends old and new reached out to me, asking me how I felt watching Ackbar die in The Last Jedi. Their genuine concern was heartwarming and reminded me of the good inherent in people. Yet, I’m here to tell you something today. To Rian Johnson, Lucasfilm, and all those who worked so hard on this film, I can only say this: 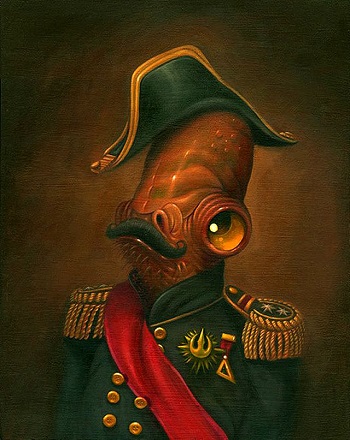 You made the right call. It was Ackbar’s time.

What, you ask? Is this the “AdmiralNick22” I’ve chatted with in various online forums? The Nick who adores Ackbar, posts or tweets endlessly about him, and whose self-proclaimed “World’s Greatest Ackbar Fan” moniker is worn as a badge of honor? Yes, I’m still all of that. However, I want to tell you why Ackbar’s death was both needed and fitting.

Let’s tackle the first part. Why it was needed. Our newest generation of heroes, whether they are Rey, Finn, Poe, and Rose, or a stable boy with a broom and a dream, are in the process of their own individual hero’s journeys. The stakes are now higher, the heroes of old are largely gone, and they are now forced to take the reigns of the galaxy’s fight to restore the Republic and bring back the Jedi Order. They can’t rely on wise Jedi Masters, cocksure former smugglers, and old heroes of the Rebellion. They must now reach deep inside themselves, look at the lessons they have learned from these heroes, and chart a course to the same end goal – peace and freedom. The deaths of our old friends, while sad, will propel these new heroes to even greater heights. Luke, Han, Ackbar and others may be gone, but their lessons and even their legends live on. The spark has been ignited, the torch has been passed.

Now, let me tell you why Rian Johnson’s handling of Ackbar’s death is brilliant. A lot of people online feel Ackbar got denied some glorious death. Or that he, not Vice Admiral Holdo, should have been the one to pilot the Raddus into Snoke’s Supremacy. Some even say his death was entirely unnecessary. To all those that hold those feelings and opinions, I respectfully but strongly say you are wrong. Not all heroes die in a blaze of glory. Some die peacefully in their sleep, others meet tragic ends, and still others pass unnoticed. Ackbar, a career naval officer who served in three galactic wars, dies doing what he does best. Commanding a fleet and fighting for a cause he has fought and sacrificed for over many decades.

Ackbar, like Leia, cares more about the greater good and those serving with him than about himself.

In his last moments, Ackbar’s final line in The Last Jedi is about diverting power to the rear shields. Why is that significant? It is because the Raddus was equipped with advanced deflector shields, shields that helped soak up some of the damage from Snoke’s pursuing fleet. Ackbar’s final thoughts, fittingly, were on the men and women who served valiantly in his fleet. Did this decision make the bridge vulnerable? Possibly. Whether it did or didn’t, Ackbar, like Leia, cares more about the greater good and those serving with him than about himself. This is so perfectly in-character for Ackbar that I can’t think of a more fitting end.

I’d like to think that if Ackbar was given the choice between sitting this war out safely in retirement or risking his life once again for the greater good, Ackbar would always choose the latter. We know he did, choosing to don his uniform once more and answer Leia’s call. Ackbar died a hero, just the sort of hero I’ve always known the character was.

I know that not everyone views Ackbar like I do. That is okay! We all have our favorites and our heroes, and none of us are more right or wrong because of it. This little article is my way of saying goodbye to a character I’ve watched (originally on VHS) for nearly three decades of my thirty-four years and counting. It is also a challenge to you all. The Last Jedi was shocking in a lot of ways, but let’s all watch this wonderful story come to a conclusion. A conclusion not based on our individual wants or opinions, but based on what the story requires to propel this awesome and exciting narrative forward.

So, here’s to you, Ackbar. May calm seas and clear horizons guide you into the afterlife. May the Force be with you, old friend.

4 thoughts to “Farewell, Old Friend – Saying Goodbye to Ackbar, and the Lessons We Learn From The Last Jedi”