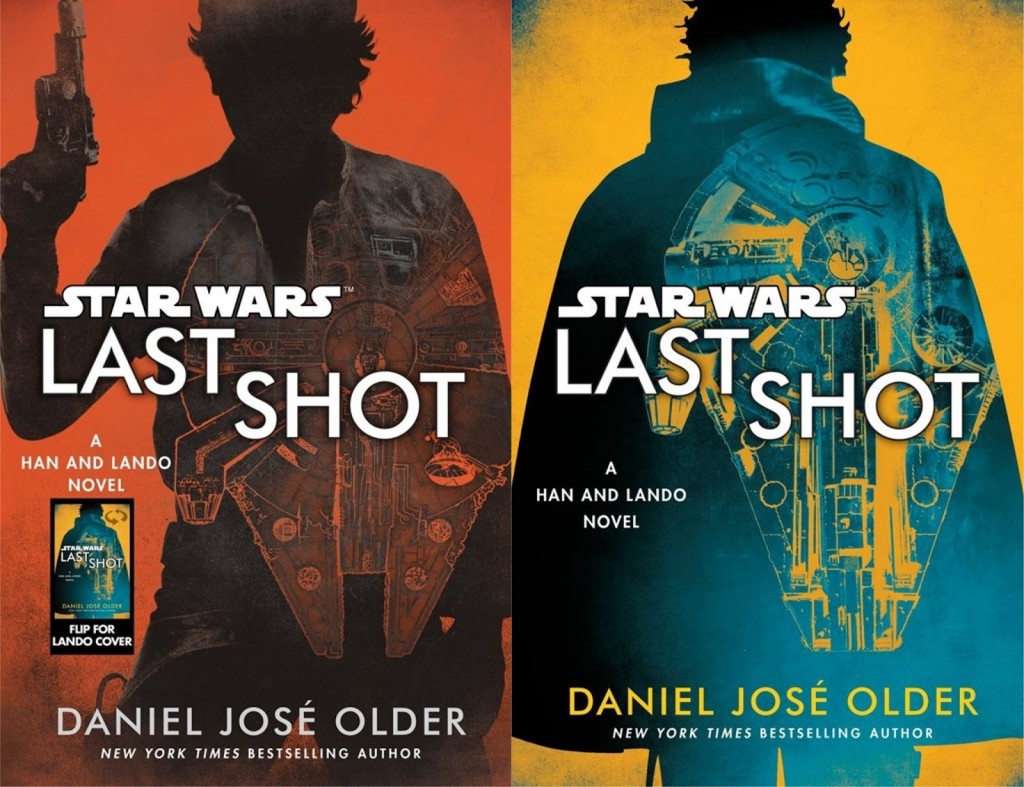 Normally, all I’d have to say about Ewoks is that they are frightening nightmare monsters that eat loyal Imperials for dinner. The latest “Ewok Hunt” mode for Star Wars Battlefront makes that clear, as the Ewoks literally hunt Imperials in one of the most terrifying game modes I’ve ever seen in Star Wars. But that too is a stereotype, based on the fact that Ewoks are fuzzy teddy bears who overthrew an Empire.

Last Shot isn’t the first Star Wars novel to play with the concept of an Ewok doing things we do not expect. A memorable recurring plot device in Aaron Allston’s Wraith series of X-wing books involved the fictitious Lieutenant Kettch the Ewok, a starfighter pilot who transitioned from joke to semi-reality. Even Allston’s Ewok humor essentially depended on the joke that we were all in on: the idea of an Ewok starfighter pilot is absurd.

In Last Shot, Han and Lando come across Peekpa at the New Republic Defense Force Headquarters building on Chandrila. They assume she is a receptionist because she’s at a desk with a comm tablet, and are later surprised to learn she is the best slicer in the New Republic’s Digital Warfare Department serving under Chief Conder Kyl. The Rebel heroes compound their mistake when they assume Peekpa can’t understand basic. 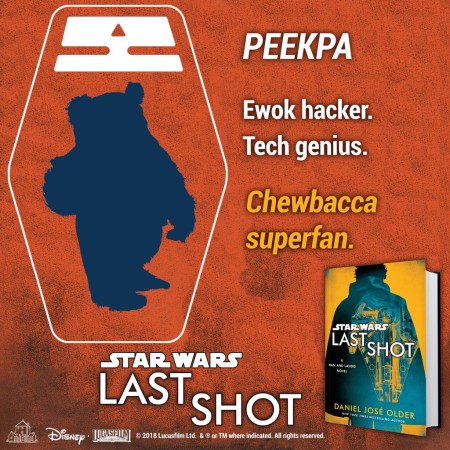 The humor here isn’t at Peepka’s expense. It isn’t because the concept of an Ewok slicer is absurd. The humor is in how our heroes keep digging themselves deeper into a hole as they continue to underestimate Peekpa because of her species. She proves herself through the course of the story and is a remarkable character—but even the fact that she exists in the first place and isn’t being played for laughs is remarkable, and something we haven’t seen in Star Wars before.

The Gungans have always been somewhat weird for Star Wars. The Phantom Menace was full of aliens with ethnic attributes that seemed uncomfortable and awkward in the best and most charitable interpretation, and they haven’t aged particularly well. Jar Jar never quite escaped his minstrel-show vibe and was sort of quietly put aside with diminishing roles in the Star Wars films (at least until The Clone Wars found something for him to do).

In-universe, they resemble natives while the Naboo people (the humans) resemble colonizers. It’s not clear in canon what the history is, but The Clone Wars does maintain an old EU backstory of a human colonization of the planet led by Kwilaan of the Core World Grizmallt. The Phantom Menace makes it pretty clear that the Naboo don’t care for Gungans, and consider them primitives. By the end of the film, we’re to believe that they’ve come together and realized their symbiotic relationship. When Jar Jar reappears in Attack of the Clones, he’s a representative in the Galactic Senate, serving alongside Senator Padmé Amidala. Equality achieved?

But it’s seldom that easy in real life. And indeed, Gungans continue to be a joke in real life. Even if the Naboo take them seriously as their equals, they’re the butt of jokes in Star Wars fandom. And I’m not tut-tutting at fandom for making jokes—but it’s not hard to imagine that these are similar to jokes that Gungans get in-universe, too. And inside the fiction of Star Wars, they’re not joking about fake aliens but actual sentient beings. What do we think of racial stereotypes in real life? Hopefully, they make us uncomfortable.

So let’s get to Last Shot—there’s a short scene where Han meets a Gungan named Aro N’Cookaala and immediately starts making goofy faces and going launching into “meesa” speech. Aro tells Han off for basing his treatment of him on one interaction with a Gungan and general nonsense he’s heard about them as a species. In fact, it turns out that Gungans still live separately from the Naboo almost forty years after the Battle of Naboo. Small wonder, if the entire galaxy still treats them as one big joke.

This scene took up a couple pages at most. It wasn’t an important scene to the main plot. But it still took my breath away, both because Older gave voice to a marginalized group in Star Wars that has always been the butt of jokes and because it feels a little familiar to the real world. It’s properly cloaked inside in-universe Star Wars logic, as it should be. There’s nothing to draw you out of the story—everything in that scene is based on stuff you see in the films. But it was about time someone wrote that scene.

Droids have always exercised a strange position in Star Wars. We’re meant to empathize with them, starting with the opening of the very first Star Wars movie. Artoo and Threepio are our everyman characters, our audience proxies. But they’re machines, and they’re occasionally treated as nothing more than tools. In fact, Star Wars lore tells us that treating droids like people is the exception rather than the norm, though the Rebellion makes a greater effort to do just that. But even so, despite all the examples of droids with tremendous individuality and personhood in Star Wars—from HK-47 to K-2SO, they’re all still tools for organic life.

L3-37 is supposed to believe deeply in droid rights, and Last Shot tells us that Lando takes her views seriously. That looks like it’s going to play a role in Solo somehow, though I have no idea if it’ll be important to the plot or just a character trait to distinguish L3 from the many distinctive droids of Star Wars. Even K-2SO at his most independent still followed Cassian’s commands, after all.

There’s a good amount of droid humor in this book, especially early on. The jokes depend almost entirely on the droids resembling traits from real people. In particular, there’s a pretentious coffee-crazed droid that’s the source of much mirth—in the characters, and in the readers. I enjoyed the effort Older went to in making the droid describe the provenance of various beans and how they were cooked—we all know someone like that. But if droids going all the way back to Threepio are funny because of their resemblance to humans, doesn’t their subservience make us a little uncomfortable?

Droids are important to the plot of Last Shot. I don’t want to spoil the main plot even though the book’s been out for a week, but the relationship between droids and organics comes up a few times in this book. Droid rights and liberation isn’t the main thrust of that plotline, but it’s rare that it comes up at all in Star Wars. Very early in the book, Mon Mothma tells Han to be nicer to his droids, on account of all they do for people. And Han, belatedly, actually receives that message. It’s something I didn’t think to see in Star Wars. It’s a little thing, but it’s something.

I still hope to someday get a story about droid personhood and their essential slavery to organics – but this was a good start.

Came for the scoundrels, stayed for the underdogs

Han and Lando are on Last Shot’s reversible cover, and are probably the reason most readers picked up the book. Some of us picked it up for L3 or Peekpa. Some may have picked it up because of the post-Return of the Jedi setting of the main plot. I was most looking forward to a combination of the above. What I didn’t expect was my enjoyment of how deftly the book handled issues that needed handling in Star Wars. How respectfully Older handled Ewoks, Gungans, and droids. Not to mention how deftly the book handled Taka, the first Star Wars character to my knowledge to use they/them pronouns.

While a Han and Lando story may call to mind the Han and Lando adventures of the early EU, I was most reminded of Aaron Allston. Not just for the Ewok thing, but Older did something that Allston excelled at—writing characters as their own unique individuals and telling a funny story that can still respectfully handle weighty topics. I wrote about some very brief exchanges, but they were so welcome that it was worth writing about them.

I hope folks pick up the book. It’s a good one. Daniel José Older is welcome to write more Star Wars any time he likes.

Thanks to Del Rey for providing a copy of Last Shot for review purposes.