Introducing seasons to your game

If you followed the guidelines I offered last time, your campaign structure would be something like this: first, a few warming-up adventures; then, the stuff in between; and finally, an epic resolution. When we look at the whole campaign through the lens of a TV series, the warm-up adventures would be equivalent to the pilot episode, and the epic conclusion would be the final two-parter that concludes the story. This time we are going to focus on the meat, all that “stuff in between”, and try to give it some structure.

So how are we going to organize all that material in between? You could easily turn it into a full ongoing series of adventures where each one feeds into the next one, but if you choose this model you will find that momentum can be hard to maintain. Alternatively, you could split it into small story arcs, like comic books often do, and have each story arc follow the next one, but this can often feel too constrictive and allow players to see the wires behind the stage more than they’d like to.

The happy medium? A seasonal structure. Once I’ve developed an idea for a campaign and worked on my master list, I usually break it into three parts, and then spread them through the campaign. Think of it as a macro three-act-structure, or even a trilogy (Star Wars!). So let’s say that I had this master list: 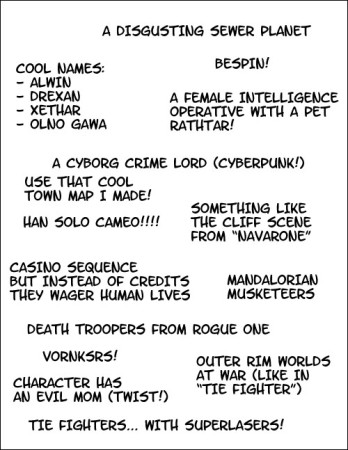 That’s a start! First, let’s identify the most solid ideas, the ones that could easily become the foundation for any of the seasons. Go full Marie Kondo and pick the ones that give you the most joy:

We have identified the ideas we enjoy the most, or that we find more memorable or powerful, so let’s use them as touchstones to split the whole lot among three seasons. Watch for ideas that seem to play off each other and group them together, and then we can start giving the campaign some shape. Let’s work on these ideas and see how we can shape them into something resembling three storylines: 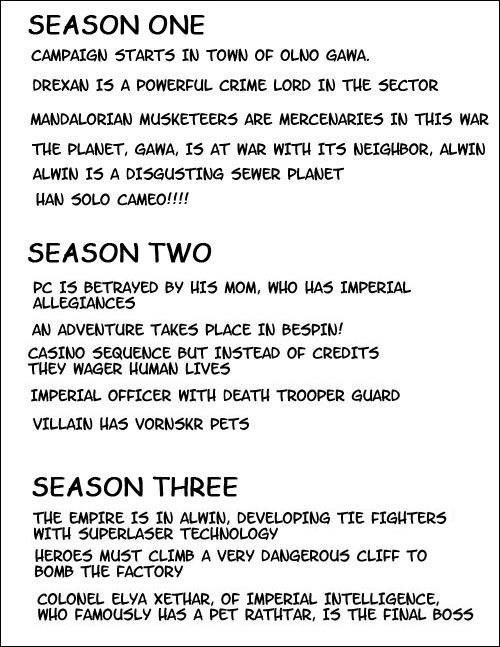 Congratulations: you now have a campaign. At least the outline of one: we still have to work harder on fleshing out and connecting this hodgepodge of plotlines and worldbuilding. We need to keep in mind that no season should be completely isolated. We need to create connections between all these events: we want to start teasing in Season One things that are going to happen in Seasons Two and Three, and we probably want characters and plots from the first season to resurface later on. As we start doing this, we will start seeing more connections to create. Let’s take a look at one of these ideas, that of Elya Xethar, who apparently has become our “final boss” for Season Three: it would be a good idea to introduce her in Season One as a mysterious stranger and then proceed to show her rise to major threat in Season Two, for example. If we do that with every single plotline that we feel merits the attention, we might end up with something like this:

And would you look at that! We have a storyline in three acts! Okay, this is not going to win us any awards, I know. I simply dumped some random stuff on this example master list. I didn’t really feel particularly strongly about any of it. But if I did…oh, this would be fire! And it would be the same for you.

Let’s take a closer look at Season One: after a couple of early adventures (the “pilot”), our heroes will be beginning their careers as do-gooders in Olno Gawa, the capital city of planet Gawa, an Outer Rim world currently at war with its neighbor, the noxious world of Alwin. Both planets are in the Outer Rim Territories; neither are part of the Empire. Our heroes have become aligned with the administration of Gawa: actually, one of the heroes’ mothers is the President of the Gawan Parliament! Soon, we will see our heroes working against the armies of Alwin, trying to settle the long war between both worlds. They will also fight against Drexan, a Gawan cyborg crime lord that’s profiteering from the conflict, and will have to fight against their equals in the Mandalorian Musketeers, a Mandalorian clan the Alwinians have hired. In the course of their adventures they will also meet Colonel Xethar, a treacherous Imperial spy that will show them that the Empire is Evil with a capital “E”. The huge Battle of Alwin will ultimately end the conflict with a decisive Gawan victory, but also with a shocking twist: the President of Gawa has been colluding with the Empire from the start, selling out both worlds and enabling the Imperial forces to take over the system. Betrayed, our heroes are forced to leave the system… but they declare that they will be back!

Look at that! We took a few ideas, we gave them shape, and we ended up with a campaign. So now, how do we go about turning this into adventures?

One of the most valuable lessons I learned from Laws’ aforementioned piece is that most series use some particular episode types. Let’s see how that applies to an RPG campaign:

Yes, some will call anything that it’s not a mythology adventure “filler”, but that’s inaccurate: character-focus episodes will move forward a given character’s personal story arc, standalones can still subtly foreshadow future developments, and oddball episodes…are often necessary for our sanity.

So how can we arrange these episodes? That depends on how you see your campaign. Do you want it to be mythology-heavy, or do you prefer to have a collection of standalones with some circumstantial connections between them? Both are completely valid approaches. If you want to have your cake and eat it too you can use the “half-arc structure”, that sets up the mythology in the first couple of adventures of the season and resolves it at the end, with the rest of the season being standalones with perhaps another mythology episode somewhere in the middle to push forward the greater storyline.

So let’s work a little bit more on our first season. Let’s imagine that we already have our players: Alan the Scoundrel, Beth the Force-User, Carlos the Pilot, and Danielle the Gambler. We’ve played a couple of random one-shots with them and now we are ready to drop them in the middle of our campaign.

The PCs start working for Madam President of Gawa, who orders them to find and destroy an Alwinian terrorist cell before they blow up the planetary shields of Olno Gawa.

Beth follows a vision that takes her and the PCs to the remains of the Gawa Jedi Temple. Why are Imperial soldiers in the ruins? And who’s the enigmatic Colonel Xethar and what are her designs for Gawa?

As a peace conference between Gawa and Alwin sounds more and more feasible, the PCs need to find out the origin of the recent attacks on Gawan ships. It turns out the cowardly crimelord Drexan is trying his best to make sure peace never comes to the system!

Danielle is in trouble: she gambled the crew’s ship… and lost it to notorious smuggler Han Solo! The PCs are now forced to help Han and Chewbacca get some deadly cargo out of Alwin if they want their ship back before the President finds out!

The PCs are forced to fight the Mandalorian Musketeers, a group of Alwinian mercenaries that force them to play a deadly game in the jungle moon of Gawa.

The PCs are sent to infiltrate the criminal organization of Drexan, the self-proclaimed “Lord of Sins and Malady”, to obtain a very important piece of info: the secret codes to Alwin’s planetary shields.

The secret offensive against Alwin is about to begin, but first, our heroes need to show their bravery in a different arena: that of basketball! Or aerohoop, the favorite sport in the system.

The final battle for Alwin, the end of the war, a heinous betrayal…and a new beginning.

And there we have it: an initial approach to your campaign. Why eight adventures? No real reason, to be frank. It’s a number that usually works for me. It’s too short to give everyone their own focus episode, but they will be getting them in the coming seasons, don’t worry.

And that’s it for this time! As usual, let me say that this is just one way of doing things: maybe you’re a natural and you can write a campaign the way Stephen King writes books, just one word at a time. But even if that’s the case, I hope you’ve found some merit in this advice. See you next time!

2 thoughts to “That 70 BBY Show: Your Star Wars RPG Campaign as a TV Series”