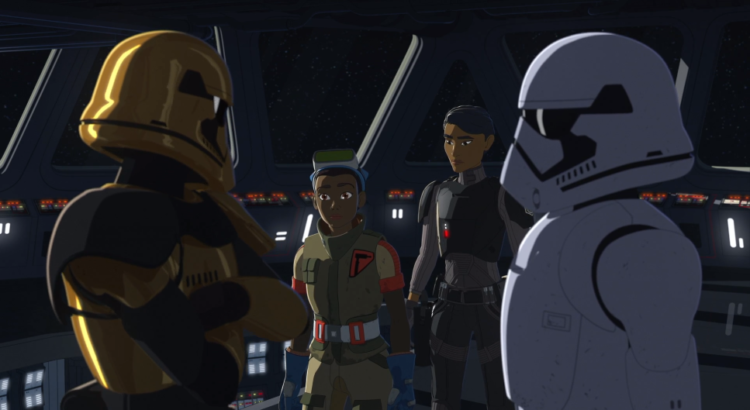 Hey everyone, Star Wars Resistance is back, and you can watch the premiere of season two right here on their official YouTube page. Please go and do so before reading on, there’s some in-depth discussion (and spoilers) below that require the full context of the episode. Watching the second episode is also recommended, but not essential. With the show’s return it is bringing some big changes and issues for all of the characters under its umbrella, but no one character has been affected more than Tam Ryvora, our favorite mechanic and frustrated pilot who worked hard and still felt slighted by and detached from those around her, so it’s worth doing a bit of a dive into her big decision and the factors surrounding it.

Throughout the first season of the show we saw her grow, softening her tough exterior thanks to blossoming friendships with people like Kazuda Xiono, Neeku and Synara San, ingratiating herself into the main cast of the show. And then at the end of the first season Tam makes an extremely difficult and fateful choice. Rather than escape from the First Order aboard the Colossus with Kaz and Yeager, she instead chooses to go with the First Order, the same people Kaz and Yeager have been working actively against for all this time, leaving both of them dumbfounded.

Tam makes this decision for a variety of reasons, some of which are her own, some of which are more external factors. The most foundational element is her love or at least appreciation for the First Order’s primary influence: the Empire. Tam’s family both lived and thrived under the Empire, and she herself was born after the Empire had fallen, so unlike Kazuda, who likely heard horror stories about the Empire through his childhood on Hosnian Prime and through schooling and training in the New Republic, Tam sees the Republic as an aberration rather than the norm, whereas the Empire was a good, solid government for those it ruled over. Thus, when she sees the First Order wearing the aesthetic of the Empire, she’s less inclined to recoil, and instead admires them for seeking to pick up where the Empire left off. When the First Order took over the Colossus, she didn’t feel oppressed; she felt safe. Even when informed of the actions the First Order took against Tehar, she assumes that there must have been a reason for it, that someone on Tehar must have been doing something wrong.

The bigger reason, though, is the resentment and anger she feels toward Kaz and Yeager for not telling her anything about their plans, or about Kaz being a Resistance spy. Those feelings were at a low simmer through most of the first season until Kaz’s loyalties came to light, at which point they rose to a full, raging boil. Since Tam already saw the First Order as a source of security, Kaz admitting that he was actively working with the Resistance to undermine them made him, in her eyes, an anarchist working for a terrorist group. All of the smoldering frustration she already felt with Yeager being favorable toward Kaz’s exploits while simultaneously ignoring or disregarding her wishes and ideas had a whole lot of fuel thrown into it all at once, meaning when the moment was at its most intense, and when she had to choose between people who had alternately lied to her and ignored her while saying they were her friends, or the open arms of Agent Tierny and the First Order, she chose the option she felt more certain of.

Tam’s choice isn’t just informed by internal factors of course, there is a voice in her ear, the proverbial devil on her shoulder, that actively seduces Tam to the side of the First Order. Agent Tierny takes a special interest in Tam from the first moment she steps onto the Colossus, talking with her numerous times in private, feeding her First Order propaganda that Tam is all too willing to believe. Tierny in effect grooms her, identifying those angry and resentful feelings already inside of Tam and feeding them, reminding her that the First Order values skill above all, that she can be a member of a group that would value her and treat her honestly, and that she can be a part of their endeavor to restore order to the galaxy. It’s all a pack of lies and half-truths, but Tam doesn’t know that; she trusts Tierny almost implicitly because she’s telling Tam what she wants to hear. In the end, the persuasion is successful not just in getting Tam to turn against her friends, but in luring her over to the other side.

Tam leaving the Colossus with the First Order didn’t guarantee what we see at the end of “Into the Unknown”, where Tam dons the full uniform of a First Order pilot, defiantly slamming her helmet onto her head to shut out the echoes of the apology message Kaz had tried to send her. Tam isn’t held against her will by the First Order, and she certainly isn’t coerced into joining them. Instead, her signing herself away and becoming pilot DT-533 is a conscious choice, a willing jump out of her old way of life and, as the title of the episode implies, into the unknown. This is perhaps the hardest part for us as the audience to accept as a part of this story, and one of the most mature character moments in the entire Star Wars animated canon. We understand her reasons, we’ve had them emphasized to us numerous times, both by Tam herself and by the narrative, but her ultimately choosing to reject the path of the light and embracing the ideals of the villains is still hard to watch.

The ideals held by the First Order can be a thorny topic. Lindsay Ellis, in her video essay “The Ideology of the First Order”, argues that they doesn’t have a fascist ideology so much as an adopted fascist aesthetic, similar to how they xerox the color and style of the Empire without the sense of collected power that the Empire had. Because the Empire was already in power when we as an audience first saw them and the First Order was not, all the First Order is doing is trying to prove itself to everyone. The destruction of the Hosnian system wasn’t a means of maintaining power through force of arms, it was a means of taking power and security out of the hands of others so the First Order could supplant them and legitimize itself. However, despite not being a one-to-one new Empire, they do still sport some of the fundamental ideals of fascism laid out by Umberto Eco in his essay “Ur-Fascism”, such as life for fascists being permanent warfare and pacifism being seen as trafficking with the enemy, or that everyone in a fascist system is educated to become a hero, and heroism is seen as the norm rather than something exceptional.

This last aspect is something used against Tam when Agent Tierny speaks with her throughout the latter half of the first season; she goes out of her way to flatter Tam, prodding her insecurities, telling her how exceptional she clearly is, drawing out Tam’s boastfulness about being a great pilot who isn’t appreciated in her current role as a member of Yeager’s crew. Ultimately Tierny manages to lure Tam to her side by convincing her that in the First Order, she will be valued, she will be able to use her skills to the fullest, and she will fulfill what she sees as the First Order’s ideals: providing protection and stability for a galaxy that is full of anarchists, like the members of the Resistance who she had once considered friends. Tam is promised the ability to become a hero even as she’s given a number instead of a name and a faceless helmet is put over her head; she is too wrapped up in her own frustrations and anger to see that she’s being exploited more by the First Order than she ever was as a member of Yeager’s crew. In the First Order, all of their pilots are heroes, but their heroes are also just numbers and dots on a screen.

With the second season of Resistance only just beginning, it still remains to be seen what will happen to Tam as the story progresses. While she’s joined up with the First Order, she’s far from a demonstrated true believer in their more severe fascist ideals. Though she seems eager to please them and earn her place, she’s hesitated several times when confronted with the idea of taking action directly against the Colossus and her friends; perhaps she will again, especially if it comes to her having to try and kill people like Kaz, Synara or Yeager. It’s one thing to boast about being a great pilot and side with the people who say they respect you over those who betrayed you, it’s another to become a cog in the machine of war and go into battle with killing intent. Kaz and Neeku still believe in her, but with the seductive words of Tierny in one ear and the snide jibes of Rucklin in the other she may have no choice but to follow through with the path she’s chosen.