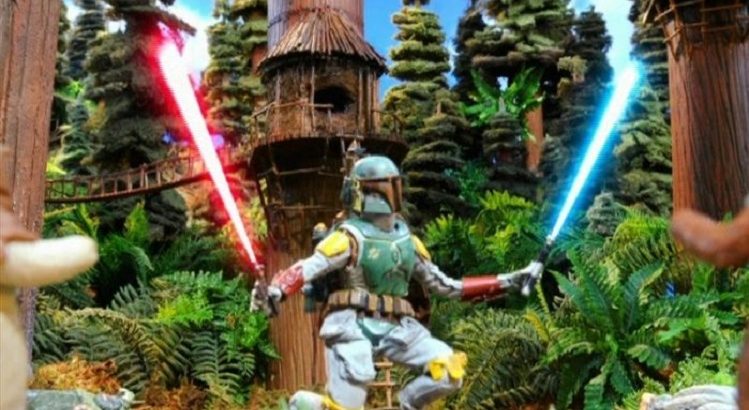 How many of our readers out there remember the show Robot Chicken? It was a sketch comedy show with crude stop motion puppetry, and odds are if you do remember it you mainly remember their various Star Wars segments or specials. I ask because there’s a particular sketch that’s been stuck in my mind ever since it originally aired over a decade ago. It’s a cold open for an episode that has Boba Fett returning from the dead to arrive on Endor’s moon, killing a bunch of Ewoks with blasters, rockets and lightsabers, and winding up with Leia clad in her gold bikini wrapped in his arms. The segment then switches perspective to show that the whole scenario was a fantasy narrated by the show’s stereotypical nerd character, a fantasy his equally nerdy friends fawn over.

It’s meant to be satire and is a pretty biting one at that. And the most biting part about it is that it’s not too far off from a lot of the stories that did involve or star the OG Mandalorian. Boba Fett has been both a role-fulfillment and wish-fulfillment fantasy character for authors and fans of Star Wars since his first appearance, and perhaps more than any other character in the whole saga in terms of what he does in “official” material versus his role onscreen. As time has gone on his character has evolved and developed away from that, but those fantasies haven’t gone away, and the old version of Fett (or a character like him) is still sought after.

Let’s get a couple of definitions really quickly: wish-fulfillment means that a character does things that the author or the author’s intended audience wish they could do in real life but can’t. Role-fulfillment means a character that people want to see within a given fictional universe and haven’t, so they adjust an existing character to fit that bill. And I want to emphasize that neither of these are inherently negative things. They are, like all creative tropes, tools in a creator’s toolbox, and it’s how they’re used that ultimately matters. In the context of this discussion, many people have used Boba Fett both to fill a role that appeals to them that Star Wars otherwise lacks, and to do things in Star Wars that they might like to do. I can illustrate both of these points with an example.