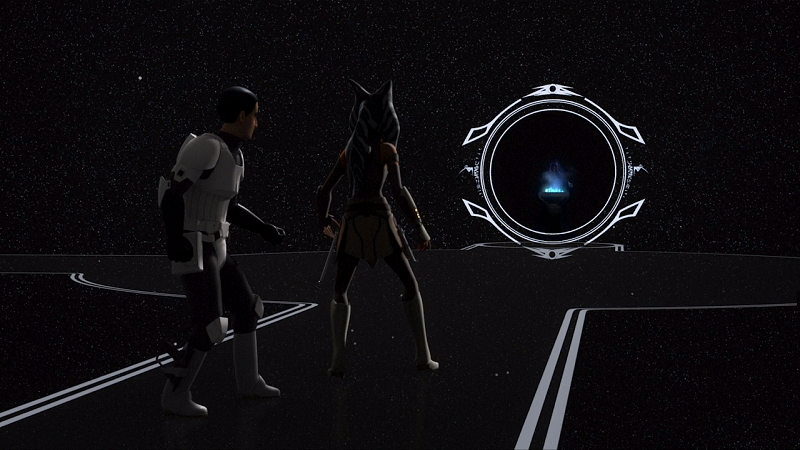 It turns out that even when a work of fiction introduces elements that require suspension of disbelief, it can still treat physics with respect by taking into consideration the physical implications that said elements would create. Also, the scientific mindset when faced with an unexplainable phenomenon is to look at the effects it causes, and use those to gain insights into its underlying properties. This is something we astrophysicists do for example when studying dark matter, a mysterious component of our Universe that accounts for about eighty percent of its mass. We still have no idea what it’s actually made of, but from our observations we already know it doesn’t emit or reflect light nor interact with electric or magnetic fields, and we can measure its distribution and even simulate its behavior at large scales. We can apply this mindset when thinking about the Force, too, and then interesting properties start to reveal themselves.

In a way, time travel through the Force has been present in Star Wars since nearly the beginning. Luke in The Empire Strikes Back had visions of the future showing his friends in danger, and the Emperor, the most powerful known Force user at that time, kept boasting in Return of the Jedi about how he foresaw future events. Granted, in both of these instances the information might have been unreliable and led to bad decisions when acting upon it, but years later Revenge of the Sith let the audience in on how accurate the information conveyed in this way could be: we discover near the end that Anakin’s visions were exactly how things would transpire, but the lack of context and partial picture ended up driving him to the wrong conclusions. The same thing happens in The Clone Wars and Rebels, with visions conveying very accurate but partial data that could lead you astray when acting impulsively upon it, or let you find a solution to the feared outcome with reflection and a clever use of the information gaps. More recently, Dooku: Jedi Lost taught us more about the torment suffered by Sifo-Dyas as he understood he was truly seeing the future, and how this accuracy later led him to defy the Jedi Council and secretly order the creation of the clone army.

Two stories in the wonderful book From a Certain Point of View provide insights from the other side, of how things look when you’re part of the Force itself. Claudia Gray’s “Master and Apprentice” (not to be confused with her later novel) refers to linear time as an “illusion”, and has Qui-Gon Jinn perceiving Obi-Wan not only as he is in A New Hope, but also as he was in the Clone Wars and before, and with full knowledge of his former Padawan’s impending death. Such event is retold in “Time of Death” by Cavan Scott, which shows Obi-Wan’s initial confusion in the instant he becomes one with the Force and begins experiencing events from the past, present and future at the same time. This simultaneous access to different points in the timeline is also exploited with psychometry, the Force ability that allows gifted users like Quinlan Vos, Cal Kestis and Karr Nuq Sin to see events in an object’s past.

These examples, however, just tell us that the Force allows information to travel between different moments in time. Moving an entire object or person across time could be a whole other thing—although we are used to the Force moving things along three-dimensional space, and we know that time is just another dimension of an entity we call spacetime. As our own inability to voluntarily time travel can attest, time is a dimension that works differently than the other three, and perhaps moving things with the Force would only work in the latter. Luckily, the Star Wars universe has extra dimensions for us to look into. One of them is, of course, hyperspace. We know the Force exists in that dimension, as the Falcon was there when Obi-Wan felt all those voices from Alderaan, Luke managed to connect to it when taking those first steps during the same trip, and more generally we don’t see Jedi cut off from the Force on long-haul trips. If the Force can transport objects through dimensions other than normal space, perhaps it could work on this one too. One could imagine, let’s say, Force-attuned wolf-creatures using this dimension to carry an assortment of heroes to the other side of Lothal. Indeed, these events in Star Wars Rebels might have been preparing us for the true scope of possibilities that the Force can really offer. The Force encompasses all of time, allows communication across different moments, and can move things through many of the known dimensions. The time travel allowed by the World Between Worlds, then, doesn’t seem so out of place.

While I think my point is made, there are still a few more examples (even restricting ourselves to the current canon, since Legends depictions of time travel were sometimes not well received). Manipulation of time by the Force could also be behind the strange passage of time that some claim to take place on Dagobah and Ahch-To during the films. And perhaps we’ve even seen actual time travel in Star Wars before, too: the Mortis episodes from The Clone Wars end with Obi-Wan, Anakin and Ahsoka in a shuttle just a moment after it all started. If the story happened to them physically and was not just a vision inside their heads, then they must have been transported back in time after their ordeal. It probably wasn’t a coincidence that the Force Wielders of Mortis were key to enter the World Between Worlds from Lothal.

So, what does this all mean? Palpatine’s craving for this kind of power was evident in Rebels. It is possible that his appearance in The Rise of Skywalker is the result of him gaining some kind of access after all, perhaps through another temple. Maybe the blue energy shooting up the reactor shaft from the Emperor’s apparent death comes from the same arts used in Rebels to try to enter the gateway, or he influenced the future through the portal when he was still alive. The World Between Worlds could even be in the movie, whether its appearance matches Ezra Bridger’s experience of it or not. Or perhaps we could see a different manifestation of the same Force capabilities. Something like this happened in the “Fortress Vader” arc from the comics, where the mask of Lord Momin tricks Vader into building a “door to the dark side”. Once done, the ancient Sith used it to emerge from the gateway in his physical form, which had been consumed by dark side energies ages before.

But of course, The Rise of Skywalker could take a different path. Perhaps the Emperor transferred his consciousness to a clone, computer, droid, or artifact. Maybe he foresaw things and left interactive recordings, or appears through means not seen before in either Legends or the current canon, and very soon my particular speculations are rendered moot. Meanwhile, did I use this as an excuse to talk more about physics and the scientific way of approaching a problem? You bet I did. If you wish to ask me questions, leave a comment below, or if you’d rather just yell at me you can find me on social media as DarkSapiens.

7 thoughts to “On Space, Time, the Force, and The Rise of Skywalker”