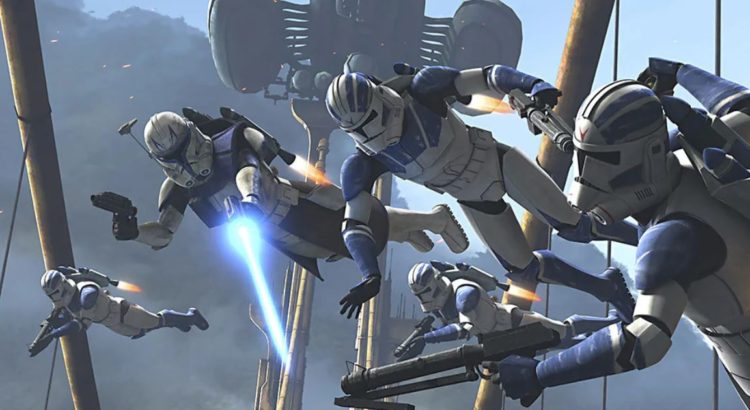 As nerd culture has become more mainstream over the last two decades, there’s been a push to make the culture grow up, to leave the presumed cringe-worthy bits behind them. It’s as if we’re demanding that the things we love (and by extension, ourselves) be taken seriously.

“You actually go outside in these things?”

“What would you prefer? Yellow spandex?”

Anyone who follows me on Twitter knows that I adore Halo: Nightfall with every fiber in my being. In fact, I like it more than the other live-action Halo outing (and fandom darling) Forward Unto Dawn. However, Nightfall has this one thing that still irks me to this day: it has one of the characters narrate Deep Thoughts™ over events in the film. In these moments, it feels like it’s trying to distance itself from being Halo, that being attached to the Halo brand means it needs to put extra effort in to make Nightfall something respectable. It feels like an apology for being a pop culture thing.

Star Wars has done this internally as well. The canon outcome for Jar Jar Binks outlined in the Aftermath trilogy draws mixed feelings from me. On one hand, Ahmed Best’s role helped me survive trauma as a child, so seeing Jar Jar – once again ostracized from all his people – helping another child process trauma feels full circle to me. But everything else in the scene feels like it has this “gotcha” edge to it, a wink and a nod to the audience who poured vitriol on Jar Jar over the years. That character finally got what he deserved, amirite?

The scene doesn’t even work as a commentary1 on the valid criticism of Jar Jar – unintentionally or not – playing into racist minstrel stereotypes. It just feels like it’s there to distance Star Wars from one of its old “shames” of having a kid-centric character that adults found obnoxious.

Look, I’ve been in this stage too, where the only good nerd stuff was the edgy takedowns of kiddie things. I’ve sang the “mean” version of Barney the Dinosaur’s theme song and thought I was the coolest, but nowadays nothing charms me more than a thing that is unapologetically itself. And that’s what The Clone Wars is.

You can give people viewing orders, tell them to start a certain number of seasons in, avoid this arc or that,2 but that’s on you. The Clone Wars itself isn’t going to apologize for an episode where Artoo goes to a spa. You want to follow the cool adventures of the cool Cad Bane? You’re getting Artoo going to a spa. And even now, the cool and darker storyline with Maul requires context from episodes about poisoned soda pop and giant trash spiders.

It requires going back to that weird little movie from 2008.

Because, as The Clone Wars is throwing itself a party by acknowledging the hand of George Lucas, the closeness of Revenge of the Sith, the return of Maul, it parties the hardest for the movie that started it all.

Now Eleven-ThirtyEight is not a site for lists – well, mostly not – so this isn’t time to write up “20 References to The Clone Wars (2008) That You Missed in the Siege of Mandalore.” There will be things I don’t touch on here. After all, it’s not just about the quantity of references, but the purpose behind them.

“Old Friends Not Forgotten” significantly retreads elements of The Clone Wars film. It starts with Obi-Wan and the 212th overwhelmed by droids. Anakin and the 501st launch a surprise attack with jetpacks. A Separatist leader is caught by a fake-out surrender. Anakin and Obi-Wan are called away from their mission due to an important message delivered by Ahsoka Tano.

The framing of Ahsoka’s arrival on the Republic ship deliberately mirrors her arrival on Christophsis, from Anakin and Obi-Wan having an argument about her arrival, to her descent from the Mandalorian fighter ramp, the shot of Artoo whistling at her, and the situation being too urgent for proper introductions. There’s a debriefing between Ahsoka and the two Jedi Knights, and then Ahsoka and Anakin split off alone to visit the 501st and see Rex.

Even in the glory of the updated animation, this retread of The Team coming together grounds us in enough familiarity that we feel the pressure of the changes. Anakin and Ahsoka have switched places between the one with the plan and the one with enthusiasm. Obi-Wan was wholly supportive of Ahsoka back on Christophsis, but here, they are firing shots at each other. Even the one relationship that seems unshaken by the “Wrong Jedi” arc – Rex and Ahsoka – only increases the tension that we the audience feel, knowing it’s all going to change too fast for anyone to keep up.

We wouldn’t have had any of this if the Siege of Mandalore decided to be embarrassed about itself, about where it came from. A major reason this episode is so good is because The Clone Wars loves every part of the journey it made, flaws and all. You’re either on board or you’re not. It’s certainly not making any apologies. It’s too busy partying.