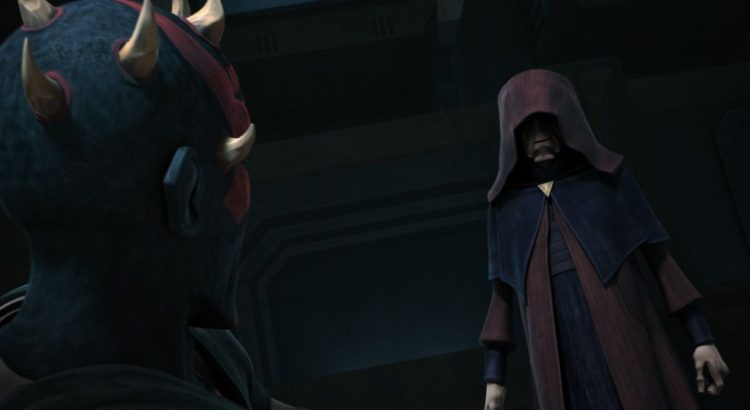 The word “cycle” gets thrown about a lot with Maul, because that is how he lives. He is – as both Freddie Prinze Jr. and Sam Witwer have pointed out – Sisyphus, constantly retreading the same ground, going after the same goals, only to fail over and over again. It’s not just about grabbing at power and then losing it again; it ties into every part of his life, including his relationships. Some of this can feel like fate, misfortune that happens to him as a result of being caught up in Sidious’s galaxy, [1]Cited with permission. but some of it is actively recreated by Maul himself.

When it comes to Sidious, Maul is the victim. There is no blame to be placed at Maul’s feet for how Sidious used and abandoned him. If we include Legends material, this is a threat that Sidious holds over Maul throughout his time as the Sith apprentice; the fear of abandonment and replacement as well as the denial of other relationships was used as a means of control.

It is also arguable that Maul is the victim of abandonment from Mother Talzin. Depending on whose account you believe in Son of Dathomir, Maul was either stolen (Talzin’s claim) or gifted (Sidious’s claim). For my part, due to the context of both revelations, I’m inclined to believe Sidious.

In both of these cases, there is no room for Maul to be complicit. Nothing he could have done would have changed either Sidious or Talzin’s decisions. Also he was a child.

However, things get a little murkier when we look at Savage Opress and Ezra Bridger. While there’s no question that Maul’s bullying and manipulation of these two (almost) apprentices is on Maul, there is the question of whether or not Maul even knows better. In his attempt to create a master/apprentice dynamic – the only context he has for any relationship – Maul manages to abandon Savage and Ezra in unique ways that perhaps Maul himself would not classify as abandonment.

Savage simply wanted to be brothers, but Maul refused in favor of the Sith dynamic he knew. While he did not leave Savage’s side physically, there was an emotional abandonment as Maul attempted to depersonalize his brother.

Ezra, in contrast, simply wanted out, so it almost appears that abandonment by Maul would be a gift. But in “Visions and Voices”, Maul has an opportunity to help Ezra face a dangerous foe – a foe Maul unleashed – to save Ezra’s friends. Instead, he abandons Ezra to face them alone.

Again, both of these instances could be played off as Maul genuinely not understanding that he is perpetuating the same cycle of abandonment that haunts him. He stays with Savage, and Ezra had rejected him, so this isn’t like what Sidious did to him, right?

It is here that “The Phantom Apprentice” truly encapsulates that yes, Maul is a victim, but he also makes conscious decisions that keep him trapped in the cycle of abandonment. His monologue to Jesse is key here:

Clones. Bred for combat. All part of the plan. …I played my part, and do you know what happened to me? I was cast aside. I was forgotten.

Maul is making a connection here between himself and the clones. Remember that later in Rebels, he’ll mention that he too was specifically used to be a tool of combat. His speech in “The Phantom Apprentice” to his Mandalorians about dying a good death as warriors on the field of battle also ties them to this same concept.

It is not the way of your people to hide here, in the gutters.

The clones, the Mandalorians, Maul: all of them intended for war. And Maul, in a stunning, rare display of self-awareness, recognizes that. In other cases where Maul has recognized similarities in others – Ahsoka here and later Ezra – there’s a degree of empathy that drives him to reach out a hand. With both Padawans, there’s a sincerity and a relief in the few moments that Maul believes he is no longer alone. With his Mandalorians though? The ones he openly acknowledges as the people who saved him from the man he fears the most? The ones who have been fiercely loyal to him?

Saxon: Lord Maul, I need back up. Our forces are falling, we need your support!

Maul: Hm, no. I think not. Any moment my ship will be arriving. Die well, Mandalorian.

For all his hatred of that which Sidious has done to him, Maul deliberately copies his master’s abandonment.

When we meet Maul again in Rebels, we will find him desperate and alone. Living in abandoned places and grasping at straws for what scraps of relationships he might find with Ezra and even Obi-Wan. He will be at the bottom of his cycle, trying to claw for some purchase back up. He will blame everyone else for his situation.

“The Phantom Apprentice” portrays a Maul who knows he only has a few options left to him, many of them futile. His plans are desperate and often a little too late. Yet, even as he is trapped in the inevitability of Sidious’s grand plan, there are decisions he refuses to make. Decisions that would break him – even in small ways – out of his cycle.

He could have gone back for Saxon.

One thought to ““Die Well, Mandalorian” – The Chance of Escape That Maul Didn’t Take”