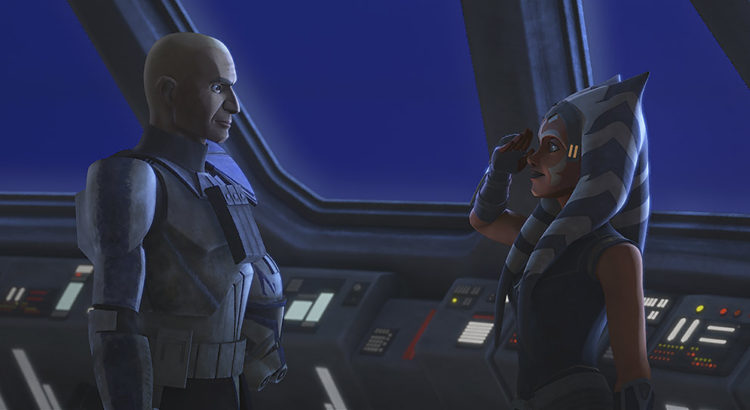 Ben: I suppose that makes me the outlier here; I watched the show from the beginning, but it wasn’t because I loved it so much as it was because it hit TV right when I was at one of my peaks of Star Wars fandom. 2008 feels like an eternity ago, but I watched it on-air from the first episode (didn’t see the movie until it was out on DVD though). I’m a huge cartoon nerd so after missing the Tartakovsky Clone Wars show I jumped on TCW when it aired, I wanted to make sure I was keeping up with the newest Star Wars storytelling format. I wasn’t always kind to the show and there were some long stretches where I’m not sure I even liked it, but I kept watching, and now I’m glad I did.

Abigail: Yeah, the Siege of Mandalore – or arguably all of Season Seven – really felt like a reward to those who stuck with the show, through its peaks and valleys. How did you folks feel about this final season before Siege, and how did you feel it led into the finale? The Bad Batch wasn’t my favorite, but it did hit those Halo vibes for me, and I loved the Rex, Jesse, and Echo content. The Martez arc, I flat-out adored, and I need those sisters back in a story as soon as possible. And I liked how those two arcs were centered around Rex and Ahsoka to get us back in the trenches with them before Siege, so to speak, after they had been on the sidelines for Season Six.

Sarah: I agree! I was a bit bored with Bad Batch but mainly because they’d already released the info and I was ready and eager for new stories! But like you said, Abigail, it was necessary to get back with Rex and see where he is before heading into the final conflict of the war. I loved the 1313 arc with the Martez sisters because it was a much needed bridge between the Ahsoka we saw leaving the Jedi Order and the one who comes back to help Mandalore. It was essential to see her try and turn away and ignore the conflict around her, only to realize (as so many other Star Wars characters before her!) that if you have the ability to help, then you should. And more importantly, for her to realize that just because she left the Order, nothing is stopping her from still living those ideals and mission. She can still be true to what it means to be a Jedi, even if she doesn’t want to call herself one.

Ben: Bad Batch, for me, felt like a typical Clone Wars arc, like the show flowed straight out of the sixth season into the seventh without ever really having gone away. It wasn’t until the Martez sisters arc that things got really different (which I wrote about at the time). Of course, Siege of Mandalore is on an entirely different level. I can see why they selected the arcs that they did, setting both Rex and Ahsoka up for the places they go throughout the Siege — though I’d argue that you can jump from the end of Season Five, with Rex having gone through the events of Umbara and Ahsoka leaving the Order, to Siege without too much being missed. That said, I do appreciate both other arcs for giving us more time back with these characters before everything kicks off, both adjusting to their new “normal” after the arcs I mentioned and before they get kicked into a tailspin by Siege.

Abigail: Speaking of said tailspin: how are y’all doing?

Ben: I’m good with it. I know that this last episode wasn’t the big bang finale that some people expected, there wasn’t a big montage of other Order 66 victims or anything, but I enjoyed it. The way it ended with quiet and poignancy reminded me (you’ll love this Abby) of “Twin Suns”. It’s not the same, there’s a good deal of action in this episode compared to “Twin Suns” being mostly dialogue, but it’s not action with a fist-pump, it’s action with tears. Neither Rex nor Ahsoka want to fight, but they’re not given any choice, and though they do their best not to kill any of their former friends, they all still die in the end when the Destroyer crashes. There’s a sense of weight and gravitas to everything; seeing Ahsoka stand in front of the rows of helmets, some painted with representations of her face, and drop her lightsaber in the dirt hits hard. It’s not as bitter as it might be since we know where things are going into the Rebels timeline, but it’s still bittersweet at best.

Abigail: You are absolutely right; I do love that comparison! Ahsoka’s reluctance to fight is very much like Obi-Wan’s on Tatooine. Dave Filoni has talked about how Obi-Wan wanted to see that Maul had changed, that there was a way out of their final encounter that didn’t involve further death. That’s very much in line with Ahsoka refusing to be the one who kills the clones, even at Rex’s insistence. And that was the moment in this arc that finally brought me to tears.

With his helmet on, all we hear from Rex is rage. When Ahsoka lifts off his helmet, not only is he crying; he can’t bear to look her in the eye. I can’t help but think that his rage was an externalization of his own shame for succumbing to Order 66. He hates himself for what Sidious did to him and doesn’t know how to handle it except to lash out. It’s a parallel to Maul that I wasn’t expecting to see, but also what made the renegade Sith the perfect final enemy for Ahsoka and Rex. Maul is everything they could have become, thanks to the Jedi’s failings, thanks to Sidious’s machinations, but because they stayed together, they didn’t lose themselves.

Sarah: It’s truly taken me a couple days to get a handle on it. I knew immediately once I finished that I loved it, but I had so many thoughts jumbled around in my head that it took a while to get them into a coherent expression of praise. The finale (much like the entire series) did an excellent job humanizing the horror of the war and Order 66. By focusing exclusively on Ahsoka, Rex, and the clones under their command, it brings the tragedy home in a personal way. We’ve quite literally seen Ahsoka grow up over the course of the show, and have spent hours with Rex and the clones. They’re familiar and treasured to us, so watching their lives get ripped apart by Sidious hurts all the more. Just three episodes earlier we watched this unit of clones proudly show Ahsoka their tribute to her in the form of masks painted with her colors and markings. Now those very same clones are trying to kill her and there’s nothing she can do about it; it was a near miracle she was able to deprogram Rex and there’s no way she has the time or ability to give all her clones that same treatment.

And yet she doesn’t let this lessen her empathy! Even knowing that the clones would show her no mercy, she refuses to hurt him and does her level best to escape without killing a single one. The moment between Rex and Ahsoka where he breaks down with the knowledge that his own brothers would die pointless deaths if it meant killing the two of them is one of the most poignant in the whole series. It reminds us yet again that the clones are individuals, not interchangeable, identical machines, and they are just as much victims of Sidious as the Jedi. And when the clones are inevitably killed (likely in horrible, mangled ways) with the crash of the ship, Rex and Ahsoka bury them with the dignity they deserve…and most likely at significant risk to themselves. How long do you think it took to pull out the bodies and dig all those graves? Every second they lingered there increased their chance of getting caught, but they stayed and did it anyway. Up until the end, The Clone Wars reminds us that war always has a cost, and nowhere is that better reflected than in the final shot of the series: a face with Ahsoka’s markings watching her former master walk away, an emotionally broken shell of the man he used to be.

3 thoughts to “Ended, The Clone Wars Have”