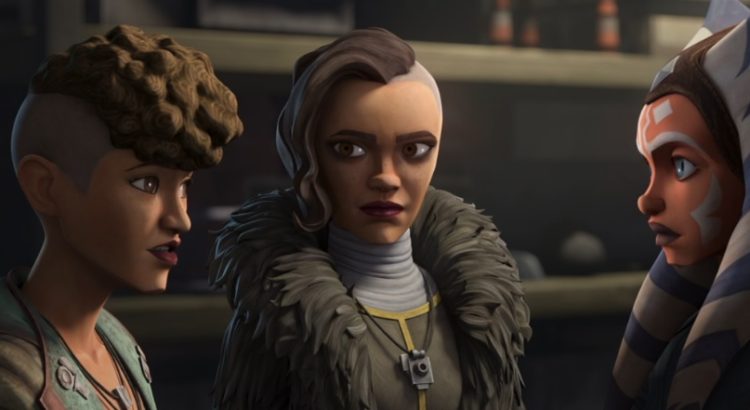 The Bad Batch is almost exactly what I had expected in terms of new The Clone Wars content. The story itself is fairly straightforward and predictable with solid action scenes and some boisterous new characters in Clone Squad 99 themselves, but it’s nothing that we hadn’t seen before. The plot hangs on Rex’s obsession with finding his presumed-dead squadmate Echo and rescuing him from Separatist hands, but there’s very little tension or emotional resonance barring two or three quick scenes. The Bad Batch themselves are absurdly overpowered supersoldiers who win every engagement they fight in, and Rex’s faith in both Echo’s survival and his unerring loyalty is validated to the letter. Rex letting Echo join the Bad Batch at the end should resonate, with him letting his brother leave of his own volition after working so hard to get him back, but it feels rushed and unearned.

That’s not to say that Bad Batch is, well, bad, it’s not. It’s solidly middle-of-the-road for The Clone Wars, not plumbing the depths that some arcs do but not rising to the heights of others. If all three of the arcs we got in the show’s return were of this quality, I would still consider it a success, if only because I’d prefer to see these stories animated as intended rather than used as a basis for novels à la Dark Disciple. The Bad Batch would not work in any format other than an animated show without being heavily overhauled. So my enthusiasm was dampened but not extinguished, and I kept my expectations at a manageable level when the Ahsoka underground arc began.

Then “Gone with a Trace”, the first episode of that arc, came out, and it blew me away with how much more compelling and character-centric it is than not only Bad Batch, but almost anything else in TCW before it.

One of the fundamental rules of screenwriting is the rule of Intention and Obstacle. Intention is a way to quantify the motivation of a character or group of characters, and the Obstacle is anything or anyone that stands in the way of their getting what they want, thus creating conflict which then creates the plot. The Ahsoka underground arc is very different from most TCW stories because, for once, there is no clear overriding Intention for the main character to follow after. Ahsoka is the main character — the poster child of the whole show, in fact — yet her motivations have completely dried up. She’s no longer a member of the Jedi Order, the war is over for her, at least for the moment, and she has no motivation beyond just going somewhere else, wanting nothing more than to fix her swoop bike and keep moving with no ending destination in mind. The shot in “Gone with a Trace” of her looking up toward the distant sunlight of Coruscant’s surface illustrates just how lost she is, part of her longing to return to the world she knew, part of her refusing to back down from her decision.

And then she meets Trace, and a whole new set of Intentions start making themselves known. Trace is a mechanic and wannabe pilot who is good at the former and not great at the latter, a rarity among Star Wars characters. She also has a very distinct Intention, trying to get out of the undercity, and despite trying to act tough reveals an earnestness and honesty that endears her to Ahsoka immediately. She also meets Trace’s sister Rafa, who is likewise very driven with a clear Intention, but unlike her sister doesn’t have to pretend to be callous and embittered by the world she lives in. The three of them then proceed to alternately work together and butt heads throughout the arc, with the different Intentions of each making them Obstacles to the others. Trace wants to fly and be respected by Rafa as her own person, Rafa wants to get ahead by any means necessary while looking out for Trace at the same time, and Ahsoka wants to keep her identity hidden, but also make the world around her better however she can, including by keeping the sisters alive.

These conflicting, layered motivations are treated with an intricacy that is missing from a lot of other TCW stories with similarly arranged casts. Where Ahsoka would normally have the moral high ground and be treated as the “right” point of view, the sisters are not treated as wrong for wanting what they want, only that they are going about it the wrong way, due either to naïveté or to reckless determination. And yet Ahsoka’s ideas for how to help fulfill their Intentions while still following her own morals don’t work out any better for the trio, and they wind up all being captured by the Pykes. This sort of layered conflict between sympathetic characters gives the arc far more depth than most of what TCW has done in the past, even before the sisters reveal why they are in the situation they are in when Ahsoka meets them.

The differences in writing between the two arcs are stark. Whereas Bad Batch feels like a continuation of the same show that we’ve known since it started airing back in 2008, Ahsoka underground is distinctly different. While the animation and style are the same, the fact that the stakes are so much lower means that the big battle sequences have to take a back seat to character and dialogue. The fact that the scripts for the Ahsoka underground arc were majorly overhauled during the show’s second cancellation is evident. Splitting Ahsoka’s new friend from one male character into a pair of sisters does wonders for the arc’s pacing and character dynamics by splitting the motivations three ways, but rather than getting tangled amidst those threads or bundling some of them together to simplify the story, we see all three characters challenged in their places and challenging each other, and from that comes a compelling, taut narrative, even with the low stakes.

With the Siege of Mandalore arc commencing this Friday, it will be interesting to see whether the trajectory of the writing continues along the path that it has with Ahsoka’s latest turn in the spotlight. It certainly has the potential to do so, especially if the episodes overlap with the events of Revenge of the Sith to the point where Order 66 occurs and we see Ahsoka and Rex (and potentially even Maul) try to handle the fallout. Since there will be a greater scale and a far greater emphasis on the war, I can easily see the writing sliding back to where it was with the Bad Batch episodes, where the story is serviceable but not especially compelling and leaves a lot of points not fully addressed, letting the animation and action take center stage. I sincerely hope that is not the case, both because the story deserves it, and because I hope The Clone Wars goes out with more than just a bang.

2 thoughts to “What Have We Learned? – How Time Has Changed The Clone Wars”