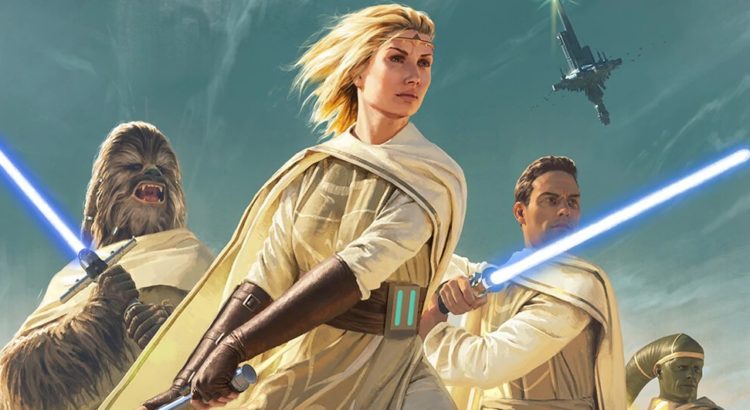 Announced some time ago, I have to admit to a certain amount of skepticism about The High Republic. With the last few years seeing some quite spectacularly awful real-world politics, a sequel trilogy of films that decided its best move was killing off Luke, Han and Leia, plus – and how could this one be forgotten? – a global pandemic, I was lukewarm about its claims to being a more optimistic Star Wars story. At the same time I had some reason to be wary of the writer kicking it off, which Charles Soule would I be getting? The one that did some smart work on the first Lando comic miniseries or the one who takes the corporate gigs like killing off Wolverine? Finally, there is the cynicism born of numerous brighter, happier superhero relaunches that end quickly with some character getting eviscerated.

It’s therefore a rather delightful surprise that Light of the Jedi defies all of this to do something entirely different, very, very unexpected but not at all unwelcome.

One question that comes up with regard to stories is if the heroes have all the advantages how can there be any real conflict or challenge? How can the villains get any victories or even represent a genuine threat? The first answer to this question comes in the face of the disaster that opens this story, and from the very start it defies expectations in a positive way. When reading it, some of what you expect does happen; you may well foresee that a particular new character is not going to be around long and, while you might be right, you may also end up caring about them far more than you thought you would. At the same time, Soule does not play the darkness card here – it’s a disaster sure, many, many people die, but the plot does not overly dwell on it. Instead we see what The High Republic is about in its response to this disaster.

In depicting the response Soule shows us how the Jedi of the era are operating, the political structures, weaves in the main characters, kills off some supporting characters while others survive, and sets up a nigh-on insurmountable challenge to all of them. Combined with a ticking-clock structure and individual character perspectives for each chapter that it then flips between, the book is at its strongest in this first part. Nor does this section end in the way we have been conditioned to expect by numerous gritty dramas, or stories that declare ‘this is where the bad guy wins’, no, instead it goes the other way, but not to the point of a total victory. There are still losses, major and minor.

Parts two and three maintain this careful balance – of enabling each side to be smart, active and intelligent; of being responsive to the other’s moves, without ever removing the optimism that runs through the book. It is this optimism and aspiration that is most likely to catch readers off guard because it is not something people are used to encountering in this kind of story. The Jedi are supposed to be either inept, cannon fodder or dead. Whatever the government, it’s certainly not supposed to competent, never mind ambitious. Politicians who don’t live in their own idealized bubbles of reality, with clear knowledge of what the responsibilities of their position entail and the impact of their actions? I must be joking, yes? Except I’m not – it really does do all this.

It has long been said the way to find success in entertainment is to give the audience what they want. The recent season-two finale for The Mandalorian is perhaps the best recent example of this. The counterpoint to this idea is that the audience do not always know what they want until it turns up. Light of the Jedi is an excellent example of this. Did I know I needed it? No. Do I want more of it after reading this opening shot? Certainly. For me the idea of Star Wars not always being an utterly dysfunctional hellhole of a galaxy – one that is interesting to learn about at a distance but you would not ever want to live there – is one I find fascinating. The High Republic lays claim to being a different Star Wars story and then proves how it will be so.

Let’s turn to the villains. One advantage of having a group of villains is it opens lots of doors for all kinds of nefarious intrigue. It proves to be so here, with the Nihil being a fractious and disunited yet scary adversary and a rather neat dark mirror to the belief that you should always get what you want, with nothing getting in the way. The Nihil response to that philosophy is: Yeah? You want to see what that really looks like? Just watch us. There are also a good few hints of a darker mystery here, which future volumes should pay off.

Talking of future volumes, The High Republic has laid claim to one of the most dubious ones going for any multimedia undertaking: that you don’t have to get all of it. Many have claimed this, very few to none have succeeded. It does seed the next two, novels ostensibly for other age ranges, in its final pages but it does so in a way that invited me to check them out, without requiring me to. The real proof of this is some way off, in the form of July’s sequel, The Rising Storm, but the other one I have pre-ordered, February’s Into the Dark, will be a good, more immediate test. This one might well pull it off.

Will they maintain the optimism and aspirations that run so strongly through this opening epic? Hopefully, especially if they appreciate the importance of what they have started here. Throwing away these aspects for a quick, single volume, immediate gain would wreck it. Sure, the final pages set up some dark, dark events – there’s no way around that given how events play out, but I would like to think the fine sense of balancing that runs through the entire book will be a consistent feature of all of the stories that come under the banner of The High Republic.

Six years ago, the new canon of Star Wars books kicked off with A New Dawn. It became one of my favorite stories. It also gained my interest in other stories that I was not planning to seek out because it was that good and that was where the story of the characters continued. Now Light of the Jedi has done similar: I am more likely to check out the IDW comics, and if Marvel are wise enough to release their part of this in an oversized hardcover I would also snap that up. It’ll be intriguing to see how the just-announced television series The Acolyte fits into all of it. And who knows, maybe there will be an audio production too.

One thought to “The Unexpected Optimism of The High Republic”