Man oh man, the Bantam era. Not having discovered Star Wars until the Special Editions in 1997, I spent the next couple years racing through dozens of already-published novels before catching up to the “present” right around when the New Jedi Order started. As such, those first fifteen years after Return of the Jedi are kind of a blur for me; though I at least had the advantage of reading them mostly in chronological order. I don’t really remember the stories of that era, for the most part, as much as certain distinct moments—Han crashing the Falcon on Kessel. Bib Fortuna’s brain in a jar. Leia hiding from Thrawn on Honoghr. Anakin on Centerpoint Station. Jaina in her cell.

Cell? What cell? Why, on Hethrir’s worldcraft, of course, in The Crystal Star.

Having abducted all three Solo brats just prior to the opening of the novel (which was admirably in media res of him if nothing else), Hethrir, leader of the Empire Reborn cult, steals away to his worldcraft, which is a spaceship that’s also kind of a planet and…eh, it’s not important. Jacen and Jaina, all of five years old at this point, are locked in separate cells with a bunch of other kids at something of a reeducation camp designed to teach toddlers—the only people who could possibly buy Hethrir’s argument—how great Emperor 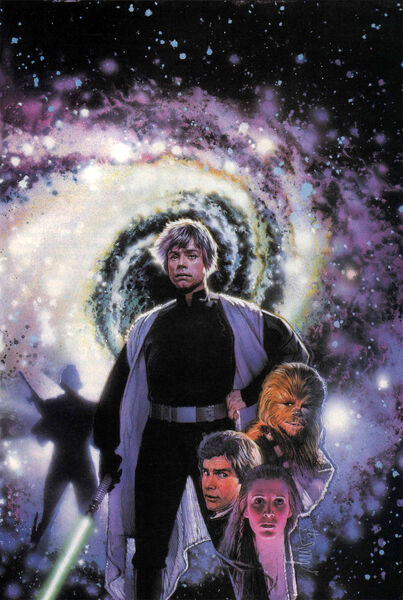 Palpatine was and how thrilled they should all be that Hethrir is bringing evil back. The twins aren’t buying it, of course, and soon enough they lead an exodus with the help of a friendly dragon (no, really).

It’s fairly standard young-reader pablum, really; told well enough, but nothing especially clever or original. Except for one thing.

Hethrir is using the Force to dampen, and monitor, Jacen and Jaina’s still-burgeoning powers; Jaina describes it in her internal monologue as a heavy, wet blanket covering them and preventing them from exerting themselves to escape. So one night in her cell, Jaina starts to experiment—she reaches out to a single air molecule floating in the room. Wiggles it around. Hethrir doesn’t notice. She adds a few more, tries rubbing them together—a light appears! Hethrir still doesn’t notice.
END_OF_DOCUMENT_TOKEN_TO_BE_REPLACED