My fellow ETE writer and friend across the pond, Ben Crofts, recently wrote a fantastic article praising the Empire’s iconic and menacing Star Destroyers. The Star Destroyer certainly is famous and its place in the opening scene of A New Hope has forever secured its place in cinematic history, but there is a lovelier belle at the ball. She has curves where it counts and it is the best damned looking warship in the Original Trilogy. Who is this lovely lady, you ask?

Move over, Star Destroyer, ’cause this gal can catch more second glances than a Twi’lek dancer in Jabba’s palace. No longer are Rebel forces stuck going into battle in rusty old blockade runners or secondhand frigates. They need not be self-conscious of their 20 year old Y-wings or repurposed Separatist ships. Now, for the first time, they have a capital ship capable of going toe to toe with the Empire’s Star Destroyers.

Surely, you say to yourself, Nick must be speaking in jest. No friends, I am being honest. The Mon Cal cruiser is the bee’s knees. Just look at the two primary exemplars of their class, the cylindrical Home One and the winged Liberty. With her graceful lines, bluish hull, and powerful curves, Home One and her sister ships served the Alliance well and helped deliver the knockout blow that put down Vader’s Super Star Destroyer at Endor. The Liberty and her sexy, 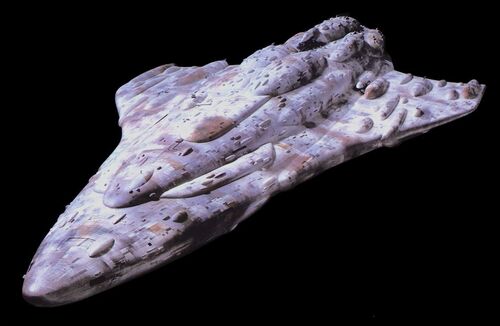 carefree winged hull form was
designed, so I am told by retired Mon Cal engineers, to lull Imperials into a false sense of security, only to fall prey to her deadly wiles. So scared was the Emperor of these winged wonders that he took a break from taunting Luke to tell the Death Star’s commanders to take her out, lest his forces surrender immediately!

Alright, I have had my fun at the expense of those boring Kuati wedge ships. Backbone of the Alliance Navy and pride of the Mon Calamari, the Mon Cal cruiser is the culmination, from a visual standpoint, of all the progress and growth that the Rebellion made from its early victory at Yavin to the climactic space battle over the forest moon of Endor. When fans were introduced to the Rebels in ANH, they had a handful of snubfighters to throw against the Empire’s mighty Death Star. By the end of The Empire Strikes Back, the Rebel Fleet is depicted as collection of transports, smaller craft, and a Rebel cruiser converted into a Medical Frigate. After the loss of Hoth, the last shot we see of the Rebellion is a ragtag bunch of freedom fighters hiding at the edge of the galaxy. All seemed lost.

Enter Return of the Jedi and the best damned fleet shot in the entire movie. Fans, just getting over learning that Leia is Luke’s sister and listening to Obi-wan warn Like about the powers of the Empire, are treated to an awe-inspiring and majestic shot.

The Rebel Fleet, led by the impressive bulk of Home One, flagship of Admiral Ackbar. As the massive Star Cruiser glides across the screen from left to right, tiny X-wings dart across the screen, while other assorted Rebel warships flank the admiral’s cruiser. For the first time in three movies, the Rebels are shown to have the firepower needed to tackle the Imperial fleet head on. They will have their work cut out for them, they will suffer some significant losses, but ultimately the Rebels and their Star Cruisers will beat the Empire’s best and go on to lead the charge in liberating the galaxy.

Ultimately, the question of whether the Mon Cal cruiser is better or worse than the Star Destroyer is a discussion that Fleet Junkies around the world have debated (and no doubt will continue to) for decades. Some will agree with me, others disagree, and yet others will say that the curvy cruisers and their wedge shaped opponents are actually like peas & carrots, best when served together.

Well, I like carrots. Wait, or is it peas? Crap, did I leave my dinner on the stove?

One thing is certain. When Episode VII comes out, I can guarantee you that one of the many awesome ships we see introduced will be the successors to the Mon Cal cruiser. And who knows, maybe even one of those wedge ships too…

With the possible exception of the lightsaber, the most iconic aspect of the Star Wars saga is its starships. When audiences first saw the Rebel Blockade Runner fleeing from a massive Imperial Star Destroyer, it was apparent that the Star Wars universe was going to show starships of a different sort when compared to other science fiction. Instead of retro-looking rocket ships or silver saucers, ships were incredibly detailed, showed wear & tear, and set the pace for all science fiction movies to follow. Just as the Prequel Trilogy of the past decade showcased designs that were intended to appear as the precursors to the famous starships of the Original Trilogy, the new ships of the Sequel Trilogy should be their logical successors.

While I have no doubt that the good folks at Lucasfilm and Industrial Light & Magic will create some incredible new starships, they would do well to look to the Expanded Universe for inspiration as well. Nearly two decades of novels, comic books, and video games have produced hundreds of incredible designs that would fit perfectly into the Sequel Trilogy or spinoff movies. Therefore, I propose the following five vessels from the Expanded Universe that should have a place in Episode VII.

The toughest act to follow for the Sequel Trilogy will be the X-wing starfighter. Easily one of the most recognizable ships of the Star Wars saga, the fighter was the personification of the Rebels’ war fighting efforts. While it may be tantalizing for the creative minds behind Episode VII to use this fighter, the Expanded Universe already has a fighter that would serve as a great follow on to the X-wing. First shown in the comic miniseries Dark Empire (which was so loved by George Lucas that he gave copies to the staff at LFL one Christmas), the E-wing assault starfighter would be the perfect frontline weapon of the new Republic. With a nose and main fuselage that evokes the X-wing’s lines but more angular and possessing a pair of bent wings, it hearkens back to both the famous Rebel fighter and the ARC-170 of the Prequels. With three laser cannons and a powerful number of proton torpedoes, the fighter is the GFFA version of the F/A-18 Hornet, capable of dogfighting and assaulting larger targets.

Admittedly, the E-wing has a tough row to hoe. The EU tried on several occasions to make the craft the New Republic’s primary fighter, only to be repeatedly ignored and replaced by the ubiquitous X-wing. The fighter, for better or worse, is so iconic that few EU authors are brave or creative enough to retire it. Instead, we have literally gone through a dozen or more variants of the X-wing. Hopefully, the only X-wing in the Sequel Trilogy will be used by an aged Jedi Master Luke Skywalker out of nostalgia. Either way, whether as a primary fighter or in support of the X-wing, the E-wing fighter can and should be in Episode VII.
END_OF_DOCUMENT_TOKEN_TO_BE_REPLACED 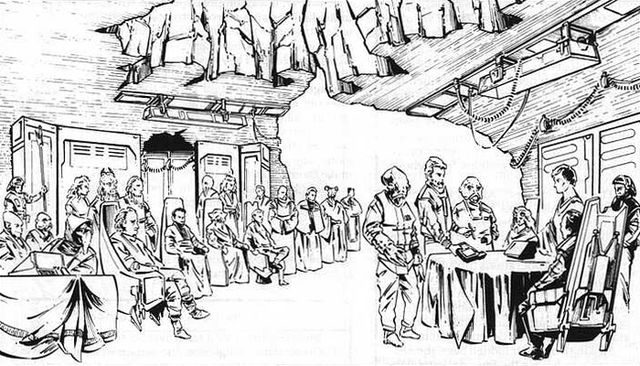 The prologue to the novelization of A New Hope, drafted by George Lucas himself and ghostwritten by Alan Dean Foster, opens with this powerful statement of the Galactic Republic. For over 25,000 years, the Republic, under the wise rule of the Galactic Senate and the protection of the Jedi Order, expanded galactic civilization and pushed outwards. In the Original Trilogy, the Republic has been dead for nearly two decades, replaced by the Galactic Empire and ruled by a Sith Lord. As Grand Moff Tarkin pointed out, with the dissolution of the Senate, the “last vestiges of the Old Republic” were swept away. Yet, despite the seemingly invincible forces of the Empire and the grip Emperor Palpatine had on the galaxy, there were those that fought to restore freedom to the galaxy. They joined together, beings from countless worlds and species, to form an alliance.

The Alliance to Restore the Republic.

Casual fans know this group as the Rebel Alliance or Rebellion, but that name is itself their charter, to defeat the Empire and resurrect the Republic. In the three movies that compose the Original Trilogy, we see our Rebel heroes destroy the first Death Star, barely escape from the Battle of Hoth, and then go all or nothing at the climactic Battle of Endor. By the end of Return of the Jedi, the second Death Star is destroyed, the Emperor killed, the pride of the Imperial Starfleet is defeated, and Anakin Skywalker redeemed. The movie ends, amid the Rebel victory and countless celebrations across the galaxy, on the precipice of a new era. The Rebels, however, cannot rest on their laurels. Their hard work is just starting. To truly achieve their charter, they must restore the best of the old and forge something altogether new.