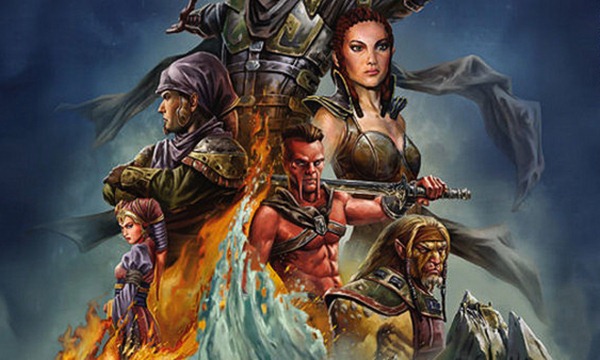 John Ostrander: What is the legacy of Legacy? <g> To be honest – it beats me. Does it have one? It’s not something with which I concern myself very much. I do the work, I hope the stories entertain, and I let the legacy, if any, take care of itself.
END_OF_DOCUMENT_TOKEN_TO_BE_REPLACED

In addition to being one of the reigning kings of what he calls “non-fiction fiction” in the Star Wars franchise—meaning reference books like the Essential Guide series and even explicitly in-universe books like the forthcoming The Bounty Hunter Code: From the Files of Boba Fett—Jason Fry is a prolific sports and media writer whose must-follow blog, Jason Fry’s Dorkery, is every bit as diverse as his professional résumé, and every bit as minutiae-heavy as the title suggests.

Now, after over a decade of experience improving other people’s IP, Fry is on the verge of releasing his first work of original fiction with the HarperCollins young-adult series The Jupiter Pirates. He was kind enough to answer a number of our questions on both his original and Star Wars work, and on the trials and tribulations of continuity.

Eleven-ThirtyEight: In both the Essential Atlas and the Essential Guide to Warfare, one common theme is the difficulty of maintaining a galactic union on the scale of the Republic, Empire, Galactic Alliance, etc. You have spilled more ink on the subject than most, so what are your views on how to make galactic government work? Would you be Emperor Fry or Supreme Chancellor Fry?

Jason Fry: This is one of those things that’s better looked at quickly, as it tends to break down under thorough scrutiny. I’m proud of the work I’ve done, mostly with Dan Wallace, to imagine how 1,000-odd regional “prequel” sectors and millions of “West End Games” subsectors could work together, and to explain the many oddities/contradictions of the Senate, but that’s really playing the hand that’s been dealt, not imagining things from the planets up. END_OF_DOCUMENT_TOKEN_TO_BE_REPLACED

Star Wars is no stranger to “genre” storytelling, and John Jackson Miller’s Kenobi, coming out on August 27, is just the latest example. Originally conceived as a graphic novel, and borne from a friendly challenge to Miller to write an honest-to-goodness Star Wars western, Kenobi tells of Obi-Wan’s earliest days in exile on Tatooine, and crucially, his first interactions with the locals despite his best efforts to remain, well, safely anonymous.

While most familiar to Star Wars fans for his long-running Knights of the Old Republic comic series, Kenobi is only Miller’s second prose novel (third if you count Overdraft: The Orion Offensive, which was serialized at Amazon.com over the summer and is now available as a collection in both print and eBook formats). Recently he was gracious enough to answer a few of our questions on both Kenobi and his earlier exploits.

Eleven-ThirtyEight: Let’s start at the beginning: your first Star Wars work was a one-shot Darth Vader story in the comic series Star Wars: Empire. While I was vaguely aware that your previous work was a run on Iron Man, I’m ashamed to admit I had never put it together before now that yours was the old “Defense Secretary Tony Stark” story. Can you talk a little about the creative through line from Iron Man to Star Wars? You took some time off from comics between the two; what then prompted you to pursue Star Wars in particular? Any interesting pitches that didn’t make the cut?

John Jackson Miller: Iron Man had come about because of my work on the Crimson Dynamo series for Marvel’s Epic line in 2003, and it really was a marathon — we were biweekly for the last seven issues of the run to bring things to the point where “Avengers Disassembled” began, and it was a test of endurance. And rather than taking time off, I spent the months immediately following that redesigning Comics Buyer’s Guide from a weekly newspaper into a monthly magazine, and that was time-consuming. It was really after San Diego in 2004 that I began pitching again, which led to work on the Simpsons line and the Empire gig.
END_OF_DOCUMENT_TOKEN_TO_BE_REPLACED