You recognize this little exchange, don’t you, little Jedi?

It’s from Traitor by Matthew Stover. The questioner is the teenage Jacen Solo – Han and Leia’s son – and the answer is from his enigmatic alien mentor Vergere,

Within the novel, the question is never directly answered, and it doesn’t need to be. It seems to serve principally to illustrate Jacen’s naïveté, revealing the inadequacy of the categories that he’s using to try to interpret the world, and the fear and insecurity which rise from that inadequacy: he’s a hardened young warrior, a killer of monsters – but in his heart and soul, he’s still afraid of the dark.

In subsequent novels, though, a more straightforward answer has been given to Jacen’s question. Vergere has indeed been portrayed as a Sith acolyte, a prose-fiction counterpart to Asajj Ventress and Savage Opress.

Moreover, this apparent “retcon” of Vergere’ backstory been closely associated with a shift in Jacen’s own trajectory as a character.

In Traitor, it seemed, Vergere was trying to help Jacen overcome his fear of the dark, by giving him a more honest understanding of the Force, one less bound up with ideas of dualistic conflict. In the later novels, however, the result has been turned on its head. As Vergere’s Sith identity has been revealed to the reader, and to Jacen, Jacen has become a Sith himself – a crazed tyrant who was eventually assassinated by his twin sister.

The implication seems to be that she was just setting him up for a fall.

The response to these plot twists has been polarized. One chorus of voices supports the dramatic and thematic repercussions, and welcomes a return to the clarity of traditional Jedi morality.

Another group of fans are crying out in opposition. Some of them simply dislike the emotional turmoil that the protagonists have been put through, but for many, it runs deeper. They were inspired by Traitor‘s provocative new perspectives about the Force, and now they find the old-fashioned binary of Jedi and Sith unconvincing.

I think it’s possible to have it both ways, though. We can accept Vergere’s argument about the nature of the Force and her backstory as a Sith. We can mourn what happened to Jacen Solo in Invincible, without rejecting the arguments he accepted as a younger man in Traitor.

It seems wrong that Vergere, of all characters, has provoked such a dualistic argument about the nature of the Force.

So, little Jedi? Shall we begin again?

Is there some inevitable logic that makes Jacen Solo’s fall an inevitable result of his acceptance of Vergere’s teachings in Traitor?

And is there some reason that what Vergere tells Jacen must be wrong, little Jedi? Is her argument compromised, somehow, just because she had some instruction in Sith techniques, many decades earlier?

Does it even matter if she continued to self-identify as a Sith sometimes, when it suited her?

After all, as Vergere herself might have pointed out… yes, she was a Sith, but she also remained a Jedi Knight.

And what the heck does that mean? Not necessarily anything, in fact.

Darth Vader was a Sith Lord for many years before turning around to become the hero in the final act.

Luke Skywalker stepped into Vader’s black space-boots in the Dark Empire comics. Characters from beyond the movies have also had their time equipped with dark cloaks and red lightsabers, among them Jedi heroes like Kyp Durron and Lord Revan.

Darth Vader’s Secret Apprentice is another example – although he’s been mentored by a Jedi Master, renounced the Empire, and joined the Rebellion, I’m not sure if he’s a Jedi by any conventional definition.

So, there plenty of heroes who’ve taken a walk on the dark side. We also get characters, heroes and villains alike, who defy the expected categorizations one way or another without crossing the central line.

I’m very fond of the Junior Jedi Knights series, in which Han and Leia’s twelve-year-old-son has to free the trapped souls of the ancient Sith civilization, innocents imprisoned by the oppressor who their histories characterize as an “evil Jedi Knight”: a subversive deconstruction of Jedi dualism for readers aged eight to twelve!

In Timothy Zahn’s novels, the ultimate antagonist, Master C’baoth, is a powerful and confident Jedi Master, whose unflinching commitment to serving the Force and upholding peace and justice has long since driven him psychotically insane.

And most of the time, no-one even notices.

And just as you can have evil Jedi, some Sith can show heroism and humanity.

In the Jedi vs. Sith comic, the enemy commander Kopecz gets to die a warrior’s death, an exit which gives him dignity and integrity, and even – quite deliberately – saves some innocent lives on the way, without compromising his insistence on being an enemy of the Jedi and everything they stand for.

It’s a very human ending for a bad guy, not that different from what happens to the Jedi Lords he’s fighting. All of them are hardened warriors, conscious that the ideals they once believed in have been obliterated by the carnage of their war.

Of course, the personalities of these characters vary. You could argue that they’re all “cheating” in one way or another, Sith-lite and faux-Jedi. But the fact that this is even possible proves Vergere’s point. There isn’t one single pattern of characterization that automatically equates Jedi and Sith with right and wrong.

The magic-wielding bad guys in Star Wars are simply crazy wizards, regardless of what they’d call themselves. That is, I’d argue, the crux of Vergere’s lesson.

So what does it mean, therefore, if Vergere calls herself a Sith?

And so, we arrive at the point I want to make.

Perhaps we’d be better off explaining Jacen’s fall in terms of the character’s underlying insecurities, his inability to truly escape from the characterization that had been laid down before Traitor. 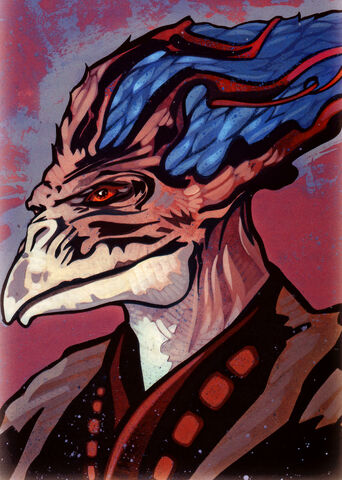 Jacen fell because the character couldn’t fully come to terms with the lessons that Vergere (and Matthew Stover) tried to impart. Jacen was presented with the argument that his Jedi self-image was naive and artificial, and given a choice: he could continue to hide his insecurities by posturing as a righteous defender of the truth, or he could face up to his potential as a complex human being who didn’t fit the usual Jedi categories, equipped with both an immense empathy for others, and a brutal capacity for violence.

… and he chose wrong.

The fact he changed the color of his lightsaber and his cloak in the middle shouldn’t hide the fact that he was driven mad by the problems that Vergere had pointed out, not by the solutions she had offered.

Jacen was simply too heavily burdened by Jedi expectations to truly grasp the lesson Vergere was trying to teach; too afraid of stepping out into the light, where people could see him for himself.

If that’s correct, then Vergere’s lessons have important implications for Star Wars. That doesn’t have to mean we stop telling stories about heroes and villains; what it does require is a more serious approach to what makes a hero and a villain.

Villainy in Star Wars can’t be simplified into black cloaks and red lightsabers. Not everyone with a blue lightsaber and a white tabard is on the side of good. But discarding the neat duality doesn’t mean that we should give up on heroism and idealism in Star Wars – it just means that the heroes who embody those principles can be flawed, complicated human beings. Star Wars heroes can be smugglers, Sith and politicians, as well as Jedi Knights.

And the villains can be Jedi Knights, as well.

This is the exact opposite of the trend that seems most prevalent to me in recent Star Wars stories. These stories have Sith protagonists, but they continue to draw a clear moral line between dark and light, so they focus on selfish antiheroes doing evil things.

I’m really not sure what the point of these stories is, unless they’re designed to tap a particular demographic, but they fail Vergere’s test at the first hurdle – they fail, because they suggest that there are simple moral lines that divide the characters into two fairly predictable and unconvincing types.

In the words of another Sith-turned-Jedi, and as Jacen Solo’s sister would privately agree, those moral lines are far less straightforward than they appear if you insist on staying away from them: the vapin’ things keep moving.

And thank fuck for that.

Now, some of you might see this as a contradiction of George Lucas’ basic storytelling concepts. But I’ve mentioned the fundamental fact of Darth Vader’s successful rejection of the dark side above. I’ll add another example: in the earliest draft script for Star Wars, the principal Sith character actually defects to fight against the Empire alongside the Jedi and the Rebels – and his motive is disgust at how the brutal war machine of the Empire is betraying the austere honor-code of the Sith Knights.

The real villains of Star Wars aren’t the anti-Jedi heretics with black cloaks and red lightsabers. They’re the people who want to take away the human right to freedom and conscience – the right, you might say, to choose, and act.

It doesn’t matter whether that oppression is achieved through magic or technology, or whether it’s being achieved by Galactic tyrants or local gangsters, or whether they wear pale Jedi cloaks, or black Sith ones.

To conclude, it seems appropriate to return to Vergere, and the answer she actually gave to Jacen’s question:

Her first motion: a faint curve at the corners of her lips. “Sith? Jedi?” she said. “Are these the only choices? Dark or light, good or evil? Is there no more to the Force than this?”

If she’s right, it really doesn’t matter if she happens to self-identify as a Sith, does it?